'In the Interest of Justice' 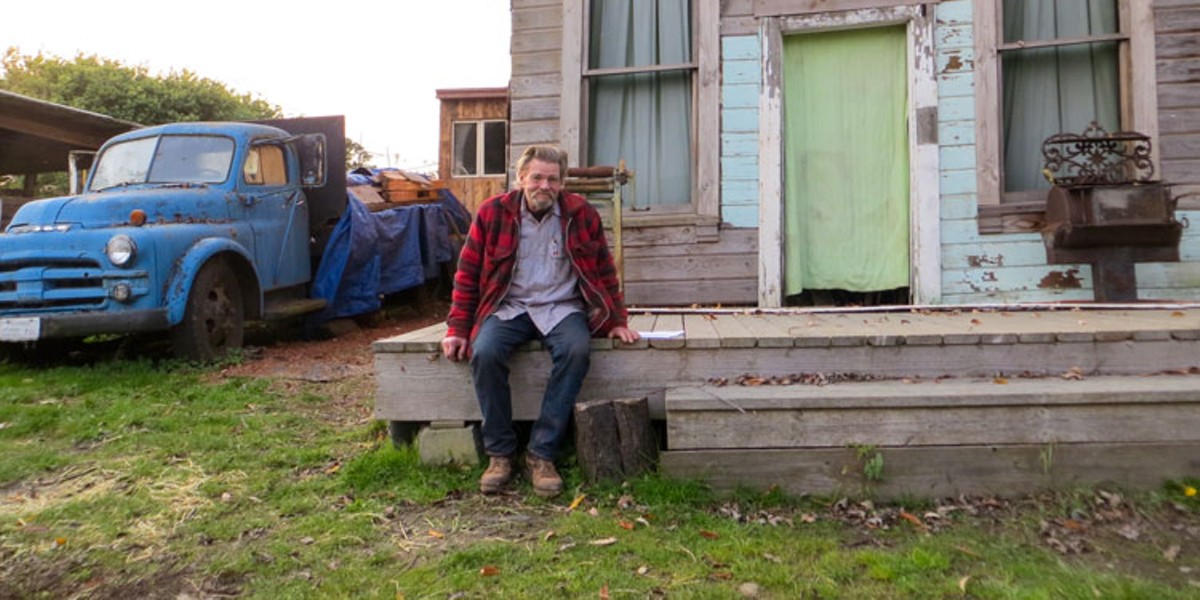 Photo by Amy Barnes Pipe in hand, Eric Hollenbeck pages through his letter from the Department of the Army.

I'm driving in the Safety Corridor when Eric Hollenbeck calls. "Are you in Eureka?" his voice gravels from the car speakers. "I got something I wanna show you."

A short while later, I navigate my Subaru down the Blue Ox Millworks driveway; around potholes the size of hot tubs. I dodge a couple of cats and park near Hollenbeck's broken down 1950 Ford flatbed named Ophelia Bumps.

Clomping down the stairs past the 16-foot-tall logger statue that was chainsawed out of one solid log, Hollenbeck has a clutch of white papers in his hand and calls out, "Hi! How are ya?"

A donkey squonks a reply from over by the rose garden. "Yesterday was my birthday," Hollenbeck says, gesturing for me to have a seat on the porch in the yellowy, late afternoon sun. He's 70 now, but Hollenbeck and wife Viviana have decided not to be old fuddy duddies. They took the day off to celebrate — reportedly just the second Monday they've taken off in the 40 years since they got married.

Even though he wasn't working, Hollenbeck came down to Blue Ox to feed the animals and, when he did, he also checked the mail. Inside the rusty green mailbox at the end of X Street was a big, official envelope from the Department of the Army.

He hands me a copy of a stern looking six-page letter and explains, "They're gonna take away my Vietnam Service Medal — which is a ribbon — and replace it with a Vietnam Service Medal with ..." He pauses ever so briefly between words, which lends dramatic effect. "Three. Bronze. Stars. Three of 'em."

"We have to back up five years to when this thing started," he says, pulling a pipe from the pocket of his striped Ben Davis shirt and stuffing it with tobacco. "Five years ago, one of my platoon members, Dodie Gains, somehow came across an order from 1968 for an award of the Air Combat Medal and my name was on it. And I never got it. So, I took that piece of paper to the (Veteran's Affairs Department) and asked, 'What am I supposed to do with this?'"

They offered to put together the paperwork for Hollenbeck to apply for his Air Combat Medal and file a request for the Army to research all of the war medals he earned and never received. "We'll see if they honor it or not," the V.A. told him. Turns out, they did.

A gray and white cat sidles up and sits patiently within reach. Hollenbeck pulls a can of beer out of his coat pocket, fires up his pipe and turns his attention to the letter. He reads haltingly, guiding a finger across each word. Reading isn't so easy for Hollenbeck. He dropped out of high school at 14 because he couldn't read and still struggles to this day. Nonetheless, he makes his way through the stiff, bureaucratic lingo:

"In the case Hollenbeck, Eric Peter, the Board recommends that all Department of the Army records of the individual concerned be corrected by deleting from this DD Form 214 the Vietnam Service Medal and adding to his DD Form 214 the:

Normally, there's a three-year time frame in which requests for correction of military records can be made. Hollenbeck's application was 40-some years adrift of that deadline but, "in the interest of justice," the letter says, the Army decided to let that slide.

Hollenbeck reckons the whole snafu happened because he didn't leave the Army through normal channels. Instead, at 19 years old, he was plucked from the jungle after his father died and immediately sent home to act as sole provider for his mom and little brother. Somewhere along the way, the medals he'd earned didn't wind up on his discharge papers.

Hollenbeck says the medals are fine and everything but they aren't what's important now. "This is the big deal," he eyeballs me gravely and continues in a revelatory tone, "the amazing thing about this is that somebody fucking knew we were there. It's that somebody actually fucking knew what we were doing!"

"I thought they didn't give a shit," he continues. "I thought we were just cannon fodder. But somebody not only knew, they wrote it down. And somebody else kept it. ... I didn't see anybody following me around with a notebook. But there is a paper trail today that these guys followed 49 years later."

The final few pages of the Army Board for Correction of Military Records (ABCMR) letter chronicle in meticulous detail Hollenbeck's time serving in Company A, Second Battalion, 327th Infantry of the 101st Airborne Division. He was in Vietnam from March 26 to Sept. 8, 1968. The Army knew right where he was and what he was doing the whole time.

"I always tell people we never came out of the jungle," he says. "And I don't know if they believe me. But it says right there — one (offensive) stops and the other one starts. The dates back right up on each other with no days in between. It was one after another after another. It didn't stop."

Until the letter arrived last week, he says, he "didn't know we were in 'Operations;' that the thing had a name." He sits in the nearly-gone sun, his face blurred by a swirl of pipe smoke. He is blown away.

He goes quiet for a few minutes, then continues. "Not a clue in the world that they would have known we were there. 'Cuz it sure didn't seem like it to a little kid. I can tell you for goddamned sure it didn't seem like it they cared at all, except every seven days they'd send out food and ammunition."

Hollenbeck is not really sure what happens next. "Do I have to buy 'em?" he wonders of the medals. The letter says, "full relief of his request was granted," but with 23,000 amendment requests a year, it may take several months for the ABCMR to complete the corrections and send official notification. (If you're ever really, truly bored, give the ABCMR a call and try to find a human in their phone tree.)

I drive home alongside the overfull Humboldt Bay with my hair smelling like my granddaddy's sweet North Carolina pipe tobacco, letting the shift in Hollenbeck's world settle in. Over the next few nights, he has a fresh batch of nightmares. He's shaken. They knew his name. They knew where he was. It mattered. He matters.