In the Prime of (Artificial) Life 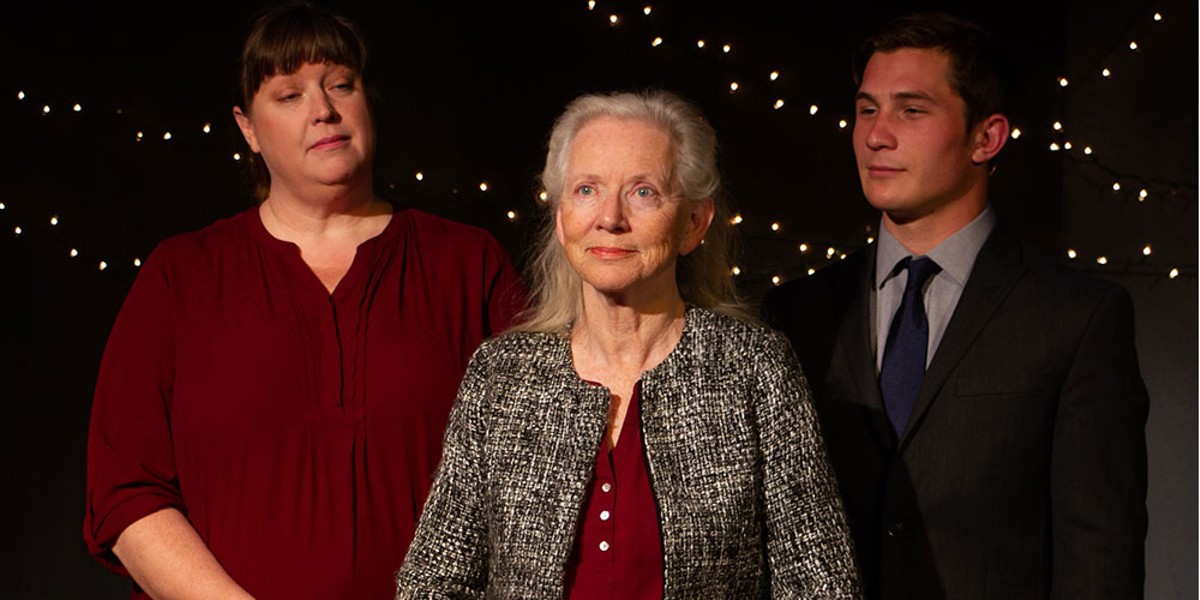 Anyone who's spent any time online in the last few years has undoubtedly encountered a chatbot — that helpful cyber-entity that's always ready to (try to) answer your questions. Now imagine that chatbot — and its self-limiting conversational skills — has left cyberspace and moved in with you, taking on the holographic form of a human you were close to but who is no longer alive.

Welcome to the world of Marjorie Prime, the first production in Redwood Curtain Theatre's 2018-19 season. Set in the not-too-distant future, Jordan Harrison's 2014 play artfully predicts what life in an assisted living facility might be like if the facility's management determined that residents with dementia would be best served by having an on-call companion from their past.

Marjorie (Joan Schirle) is just such a resident. When we first meet her, a solicitous young man (William English III) is gently asking whether she has eaten recently. Resisting this line of questioning, Marjorie instead requests that the young man tell her a story. As the story (of how Marjorie's husband proposed to her) unfolds, we begin to understand that this young man is her late husband, Walter, as he appeared some 50 years earlier. Walter is a Prime — a holographic creation provided by the assisted living facility to be Marjorie's therapeutic companion and, through conversation, prevent her dementia from getting any worse. But the stories he can tell her are only those that have been fed to him by Marjorie herself and other members of her family, creating an interesting family dynamic, to say the least.

Walter's presence was arranged by her daughter Tess (Christina Jioras) and son-in-law Jon (Gary Sommers) as a kindness but, while technology may appear to have solved some of the thornier problems of caring for an aging parent, the messy nature of the parent-child relationship has not gone away. Tess is terrified that Primes will make humans unnecessary, that we are telling them all our deepest, darkest secrets and have no control over what they will do with those secrets, while peacemaker Jon attempts to keep everyone at some manageable level of sanity.

The play moves back and forward over several decades as we watch the relationships between the humans ebb and flow, and as others re-emerge as Primes, learning their own truths about themselves and their relationships through the inevitably filtered stories of others. Emotions, too, ebb and flow as the actors switching between their human and Prime selves must navigate the tricky path between feeling and not-feeling. At the end, we are left with a sense of uncertainty. But maybe that's the point. None of us knows where any of this is going or what we will find when we get there.

The actors' performances are extraordinary. Schirle is clearly having great fun as Marjorie, sharing sly grins with the audience as she recalls (or imagines) past loves and risqué adventures, while the blank puzzlement that crosses her face when her mind fails her is heartbreakingly accurate. Jioras is self-doubt personified — her inner pain is etched on her face and in her increasingly desperate cries for help as she rides a never-ending cycle of grief and frustration. This production marks a welcome return to the Humboldt stage for Sommers, whose expansive emotional range carries the banner for humanity throughout the show, although there's always a sneaking suspicion of a hidden agenda we never quite get to see. At the opposite end of the emotional spectrum, English excels in his unwavering logic and relentless sincerity as Walter, as empty of human feeling as a Vulcan.

Kaitlyn Samuel's direction is almost flawless, guiding the actors with a delicate touch as they transition through space, time and identity, and teasing out the humor in even the darkest situations. The set, designed by Laura Rhinehart and built by (the clearly multitalented) Sommers, is quietly monotonal, conveying a lingering unease that's reflected in the abstract artwork and by Ray Gutierrez's progressively disintegrating lightshow projections on the backboard. The eeriness of the sound design by Kai Lassen further emphasizes the vague sense of foreboding that permeates the entire production. Bethany Lamoureux' costumes are effective and appropriate, subtly shifting with the characters as their roles move back and forth between hologram and human, and Morgan McBroom's stage management quietly and effectively manipulates the spare set.

On a personal note, I was a little hesitant about seeing this play, not only because many of us of a certain age harbor fears of losing ourselves to dementia, but also because a longtime friend is now in its clutches. What Marjorie Prime reminds us above all is that we must always seek to understand the nature of the truths we are told, and the source of the truths we are choosing to believe. It carries important lessons for us all.

Marjorie Prime runs around 80 minutes with no intermission, Thursdays, Fridays and Saturdays at 8 p.m., and Sundays at 2 p.m. through Sept. 23. Visit www.redwoodcurtain.com or call 443-7688.

Steve Martin's philosophical comedy Picasso at the Lapin Agile has the painter chatting with Albert Einstein in 1904 Paris. Catch it at the Kimtu Cookhouse Sept. 14 through 22. Call (530) 629-3564.

North Coast Repertory Theatre plots away with Dial M for Murder from Sept. 14 through Oct. 7. Visit www.ncrt.net or call 442-6278.

It's alive at Ferndale Repertory Theatre — Young Frankenstein, that is. The musical based on the Mel Brooks horror comedy (for ages 14 and up) runs Sept. 27 through Oct. 28. Visit www.ferndalerep.org or call 786-5483.