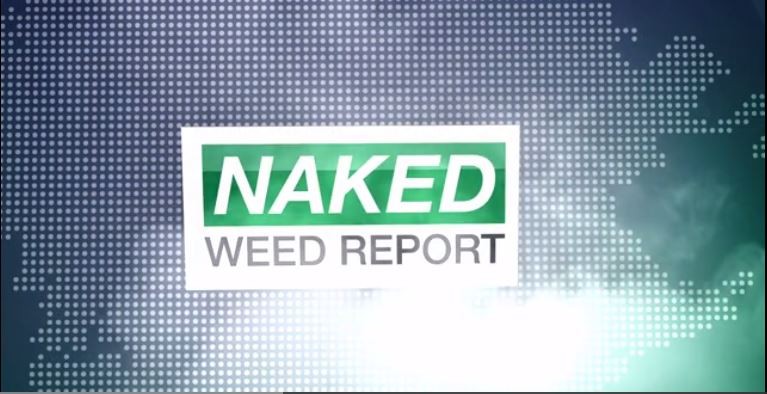 It should come as no surprise to anyone who's done more than a cursory perusal of the World Wide Web that weed and porn show up online together — to paraphrase a psychologist in Jennifer Fumiko Cahill's cover story this week, "overlapping interests." But most of those Tumblrs and Instagrams don't really incorporate weed into the smut. The feeds are a string of images; a cheesecake photo of a girl in pot-leaf-print underpants, then a pile of buds. A bent model stolen from Swank, followed by smartphone snapshot of an indoor garden. A gif of dudes pounding away at each other, followed by a shot of a shirtless hunk smoking a cigarette? Whatever, close enough.

Actual weed-themed erotica is harder to come by, apparently. (I did not do an exhaustive search. If I'm wrong, please send corrections to my boss: editor@northcoastjournal.com.)

But worry not! Filling the pot-porn void is a cast of hairless-from-the-eyelashes-down journalists at the Naked Weed Report, a weekly, softcore webcast that in some ways is a lot like this very column. (In many ways it's not at all like this column.)

Weed news roundups are OBVIOUSLY of cultural and historical importance, and willingly naked women are cool, by most accounts, but who decided we need them to mix?

OK, but what about people who want their overlapping interests in ganja and orgasms to be a little more interactive? Enter High There!, the Android app that connects lonely weed lovers. The Tinder of marijuana was born when the company's now-CEO got walked out on for coming clean about his stonerdom during first dates.

Like Tinder, the app lets you browse local profiles for shared interests (read: hot profile pics) without having to worry that your puffing proclivity will bring the hookup to a grinding halt. It's unclear how much of a presence the app has behind the Emerald Curtain — it's unavailable to iPhone users. But — serious question — do people in the Humboldt County dating scene need to worry that pot is a dealbreaker? Isn't some kind of weed activity or association expected?

If anything, it's probably Humboldt's sober singles that need a dating app.

A Reddit user recently took to the site to ask the classic coming-of-age question: "Weed makes me temporarily gay. Anyone else?"

But, presuming the post wasn't a scared-straight plant from the American Family Association (and there's a good chance it is based on this strangely unsubtle text from the post: "I feel very attracted to girls and not at all to men when sober, but when I get high I just want a big cock to suck and a man who fucks the shit out of me"), maybe there's an explanation. And it's not the phallic imagery (ahem, bong users) permeating weed culture.

In last year's article succinctly titled "Fucking Stoned: The Search for a Weed-Based Aphrodisiac," sex experts told Motherboard that cannabis can be arousing, but more likely reinforces "whatever level of sexual interest a user is already experiencing."

Author Susie Bright recommended small to moderate doses of pot to enhance arousal for those disinclined to sleepiness and paranoia, but added, "it's hard to identify universal truths when it comes to cannabis and pleasure."

Indeed, little research has been done on cannabis' loin-igniting effects, but pot has been used as a Reefer Madness scapegoat for sexual deviance and violence. Of course, being attracted to dudes is neither of those. So embrace the feeling, Redditor. Or don't. Whatever makes you happy.