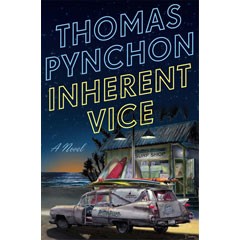 A new book by the mysterious novelist and former Humboldt resident is always a special occasion, but this time Thomas Pynchon has offered up something different. Instead of the densely allusive historical novels that made his reputation, he here tries his hand at a detective noir. Pynchon's fiction has always been informed by genre fiction, but never with the condescension that literary authors so often succumb to when slumming in the low rent district. Inherent Vice displays affection for the classic detective genre of Chandler and Hammett, even while parodying it and adding more sex, drugs and rock ’n' roll to the mix. It's a literary potboiler with an emphasis on the pot.

The book, set in 1970 L.A., tells the story of Larry "Doc" Sportello, a hippie private eye (his agency specializes in Location, Surveillance and Detection) with a fondness for marijuana. He takes a case to find his ex-girlfriend Shasta's boyfriend Mickey Wolfmann, a real estate developer who's been abducted. In the course of his investigation he runs into his nemesis Bigfoot Bjornsen of the L.A.P.D., and uncovers a shadowy conspiratorial organization called The Golden Fang, which might or might not be behind the kidnapping.

The mystery elements of the story are developed just enough for narrative traction, and Pynchon loves to go off on sidetracks and alleys, riffing on everything from the racial politics of real estate and prison gangs to the Santa Ana winds. As usual, the book is stuffed to the brim with pop culture arcana, from obscure surf rock bands, both real and invented, to TV shows of the era, and Sportello's lawyer Sauncho Smilax holds forth on subjects ranging from Donald Duck's beard stubble to a possible class action suit against The Wizard of Oz. Pynchon's goofball humor is unabated, and the book is filled with characters with names like El Drano, Ensenada Slim and Puck Beaverton.

The Manson murders hang in the backdrop of the novel, signifying the end of the hippie dream, but there's such a curious lack of real threat in Pynchon's laid-back world that when violence does finally break out it seems a bit out of place. The death-haunted grandiloquence of Gravity's Rainbow has given way to pothead paranoia, and it's interesting to see how the fantastic elements always present in Pynchon's work are here framed as someone's stoned fantasy.

To look at the neon typeface and the paperback style art on the cover, you'd think that this was the latest from Elmore Leonard, and you wouldn't be completely mistaken. This is Pynchon at his most accessible, and reads like it was written on a lark. Those expecting another difficult brain-crushing doorstop get a summer beach read instead, albeit one with his trademark weird digressions and bad puns.

One does occasionally miss the poetic reveries, more intricate prose and complexity of Pynchon's masterworks, and it might disappoint his cult, but Inherent Vice is breezy, funny and full of heart.