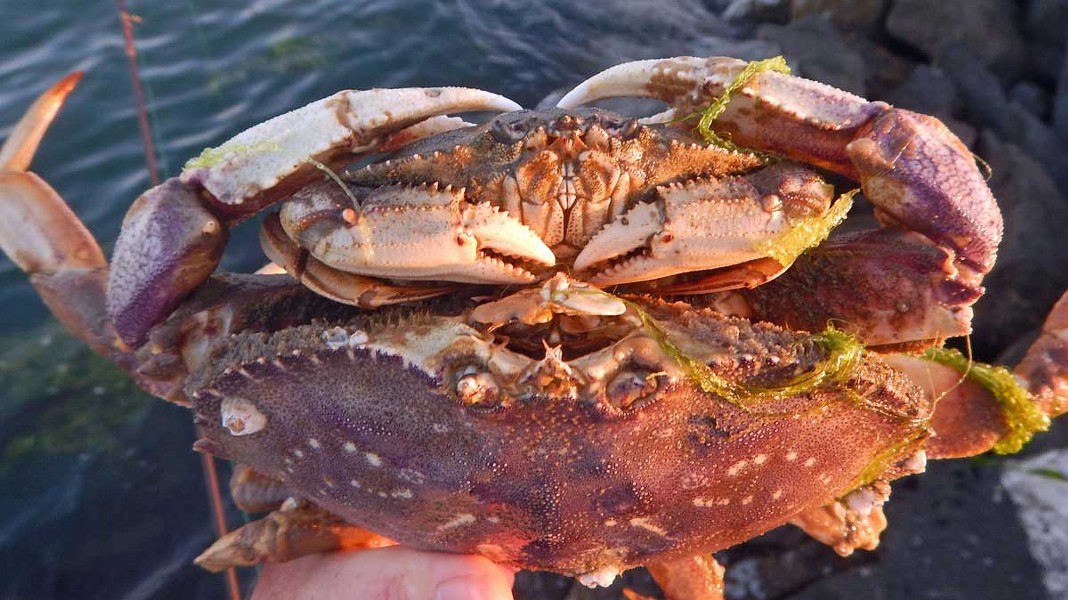 Photo by Mike Kelly A pile of molted crab shells.

Photo by Mike Kelly Male and female crabs together.

Imagine for a moment that you live in a world where everyone is born wearing snuggly one-piece pajamas. As you grow, your pajamas tighten until they pop off and are replaced with larger pajamas that fit comfortably. But it takes a couple of days for your skin to secrete your new pajamas. Meanwhile, you are naked and stuck where you are. This happens dozens of times over your life because you never stop growing.

Between successive pajama replacements, your trapdoor wears thin, and your cozy little footies get covered in burrs and stuff. As soon as you grow too big for your old pajamas, the trapdoor unbuttons and your pajamas fly off! Unfortunately, this time you are standing on a busy street corner. You are 18 feet tall because you are in your mid-50s. A few people glance at your wiener or your bosoms, but mostly they look away, embarrassed for you and knowing that they could be next.

That's pretty much how life is for a Dungeness crab, except for a few things.

The first difference is that a Dungeness crab's new shell is formed under the old shell, so they are never actually naked. However, their fresh shell makes them vulnerable to predation, and even cannibalism, because they are soft like an over-cooked lasagna noodle. So, they usually bury themselves in the sand to harden before venturing out.

Another difference between Dungeness crabs and us is that we can mate whenever we want. However, Dungeness crabs only mate when the female has just molted. This happens in the spring when females molt en masse. (The males molt in the fall.) A male finds a female getting ready to molt and holds her face to face for up to a couple of weeks. He's a good crab so he provides her protection after she molts, and he waits about an hour while she hardens a little. She signals her readiness, and then it's on!

There's another key difference between you in giant pajamas and a crab. You might have bits of stuff stuck to your pajamas, but a Dungeness crab may have actual animals, especially barnacles, living on it. And just as you always look super fine in new jammies, a freshly molted crab is pristine and beautiful.

Also, in our imaginary world, worn-out pajamas are collected and disposed of so they don't pile up in drifts. Plus, we need to keep track of old pajamas so we don't mistake a dead person in the gutter for just a set of smelly old pajamas. Dungeness crabs don't have much of a civic conscience, so their old shells pile up on the beach where people often mistake them for dead crabs. Hint: Don't call Fish and Wildlife about a pile of dead crabs unless it's very stinky.

A crab's trapdoor-like body part is called an abdominal flap. It's the part that looks like a tail and folds under the hind end. The female's flap is wide and rounded, presumably to shelter the million-plus eggs she may carry. The male's abdominal flap is narrow and pointy because it isn't wide and rounded.

Molted crab shells are relatively unstinky, so they make a nice display specimen if you can find one intact. Simply get it home in one piece, position it, dry it out and maybe get strategic with your favorite glue.

By the way, before you decide to move permanently to our imaginary world, you should know that there is a higher being there who traps people like you and cooks them alive in boiling water.