Inside the Brain of Carl Muecke 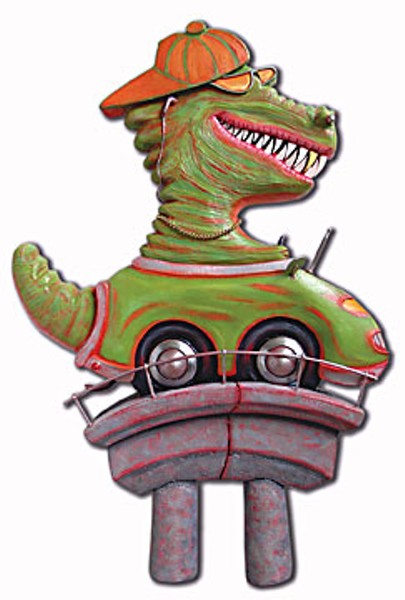 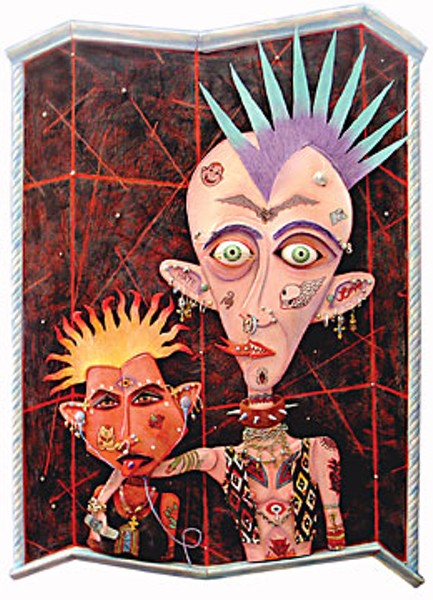 Carl Muecke likes his artwork, and that's refreshing. He's not arrogant or obnoxious about it, but he really likes what he does, as all artists should. He likes the bright colors, the ideas and the uniqueness of his work. Looking around on the Internet and talking to other artists, he says he's never found anything quite like what he does. I asked him why that was. "I don't know," he answered thoughtfully. "I guess it's because I'm a creative genius."

Far be it from me to say whether or not that's true, but he definitely has panache. His work is three-dimensional and vibrantly colored. In art school (he attended California College of the Arts and Art Center College of Design) he recognized that his strength was not draftsmanship, instead, he says, he "tended to gravitate towards a simplified, cartoony style with bright primary colors and strong shapes." The result is a sort of bas-relief version of a political cartoon.

Not all of his work is political actually. His current show has some paintings from the late '90s influenced by his upbringing in Arizona and his travels in Mexico: "the blazing colors of the Sonoran desert and the bright primary colors of Mexican folk art," he says in his statement. He also has some sculptural decorative works. Images of doors and hearts are recurring themes. These pieces are interesting, and give the viewer a sense of the brilliant and slightly skewed way in which Carl sees the world. However, it can be argued that his strength lies more in his political work.

Carl is a relative newcomer to this area — he's coming up on five years — but you may have heard of him already. He does a lot of work for the Ink People and is perhaps best known for curating their Mad/Creative show for the past four years. In that show, artists are encouraged to channel their frustrations into artwork. Whatever it is that gets your goat. That is the beauty of the show — it's non-partisan. It doesn't matter what you're angry about, just that you turn it into something thought-provoking, controversial, funny or outrageous.

Carl himself started doing political work out of frustration. He's been upset about the direction the country is heading for some time now, and rather then watching helplessly, he started making comments about it with his pointed pieces. "They probably don't change anyone's mind about politics, but they sure made me feel better," he says.

So he created pieces like Night Flight 9/11, which he describes this way: "A desperate Captain Bush searches for a safe landing for Jet USA, while First-Mate Cheney hovers nearby and Osama lurks menacingly." Exploding Door is a political version of his other, decorative doors. He says that, while our doors are not actually being kicked in by the government, "The violation of our private space proceeds at a frightening pace, and is just as invasive and sinister."

He knows that not everyone thinks that art should be political. Even many artists believe that, as Carl puts it, "Art should never be propaganda, it should always be 'pure.'"

That begs the question, "pure what?" What is art if it is not a comment about something?

Clement Greenberg, the art critic who is said to have defined modern art, talks in confusing circles about the purity of art, stating that, "The arts are to achieve concreteness, 'purity,' by dealing solely with their respective selves — that is, by becoming 'abstract' or non-figurative." In other words, a work of art shouldn't mean a damn thing.

But despite Greenberg's steadfast conviction that he was right about everything and most of the rest of the human race just didn't get it, he misses the point that we make art in order to communicate. We are an inherently social animal, and we just have to talk about our experiences. Some talk more subtly to be sure, but what of it if some of us shout?

For Carl, art is an avenue for expressing his thoughts and feelings about the world around him. He can shout at the television news, or he can make art. And Carl is really a storyteller at heart, as is evidenced by his website: www.whatintheworldiscarlupto.com. I highly recommend you take a look at it, because you can see the images and read the stories that go along with them. The show that he has up at Vanity, in Eureka (109 F Street), is a better place to really look at the detail of his work, but do both to get the depth of his work.

Carl's work will be up at Vanity through the month of March and then it will troop over to Arcata Exchange for the month of April (well, actually it will be transported, but one can almost imagine the work making the trek on its own). You missed the Arts Alive! opening, but you'll get a chance to meet Carl at Arts! Arcata on April 11. He describes himself as a curmudgeon, but he really doesn't qualify — he's too pleasant. He's a lot of fun to talk to, so it's worth getting to the reception to see him, and then come back on another day to get a good look at his work without all of the socializing to distract you.

Carl sent me this quote from Edward Abbey, one of his heroes: "Most of us have no more awareness of the grandeur, beauty, mystery, complexity, vitality, form and infinite possibilities of the world of earth and space, than the ant has of the landscape beyond the denuded perimeter of his anthill."

A humbling thought to keep in mind from someone who is doing his best to peer out past the perimeter.