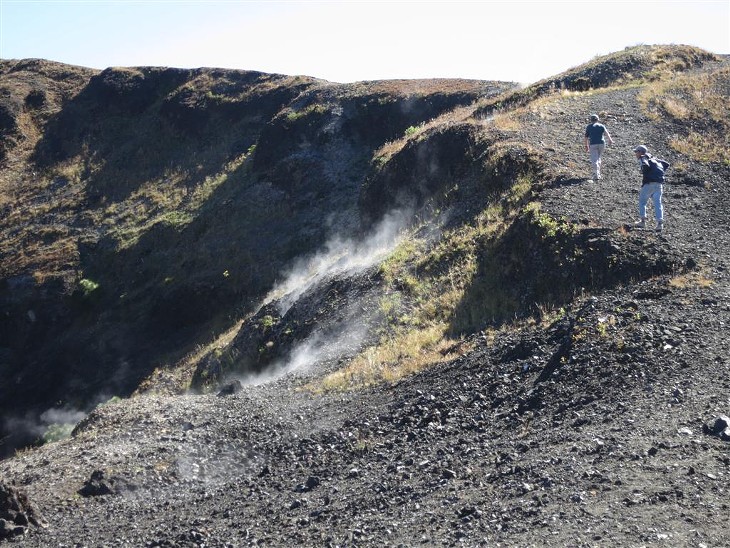 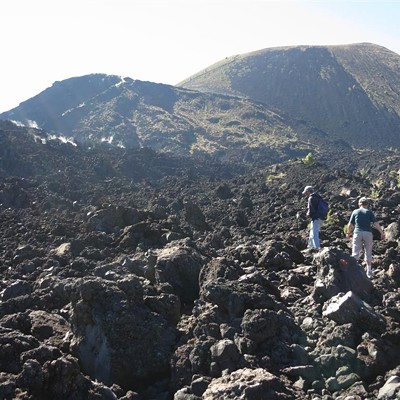 On the afternoon of Feb. 20, 1943, Dionisio Pulido was burning some brush on his Michoacán farm, 200 miles west of Mexico City, when he saw a fissure open up in the ground nearby. In his words, "I set about to ignite the branches again when I felt a thunder, the trees trembled and I turned to speak to [my wife] Paula; and it was then I saw how, in the hole, the ground swelled and raised itself [six or eight feet] high, and a kind of smoke or fine dust, gray, like ashes, began to rise up ... and there was a smell of sulfur." A day later, a 50-foot cone had formed; within a week it was 150 feet high; and a year later the cone -- now a full-blown volcano -- was more or less at its present height, about 1,400 feet above the surrounding countryside. By 1952, it had stopped growing, the eruptions ceased, and the volcano's active life was over.

Named after the closest village, "Paricutín" is today an extinct 9,186-foot (above sea level) cinder cone, which has the distinction of being the first volcano that scientists have witnessed from birth to death. Within a year of its genesis, lava from the volcano engulfed an area of about 10 square miles, including two villages, San Salvador Paricutín and San Juan Parangaricutiro. The lava moved slowly enough that villagers were able to safely evacuate and, eventually, to reestablish their lives in a new location nearby, Nuevo San Juan. Today, the towers, facade and altar of the 17th century church of San Juan are all that remain, lone sentinels in a sea of black lava. No one died directly from the eruption, although three people were fatally struck by volcano-generated lightning.

Volcán Paricutín is the youngest of about 1,400 relatively small cinder-cone volcanoes scattered over the central Mexican Michoacán-Guanajuato volcanic field, a region about 100-by-150-miles in size. Cinder cones are by far the most common volcanic landform on our planet, most of which are "monogenetic," i.e. once they're done erupting, they're done, never to come back to life. Which isn't to say there's no activity whatever on Paricutín. When we hiked around the summit crater last month, we saw many plumes of steam to remind us that it wasn't so long ago that this was the site of a fierce eruption, when a volcano the height of the Empire State Building dramatically changed the landscape of Michoacán in a few brief months.

Barry Evans (barryevans9@yahoo.com) and his wife walked four hours across a rugged lava field in the cause of journalistic integrity for this report.