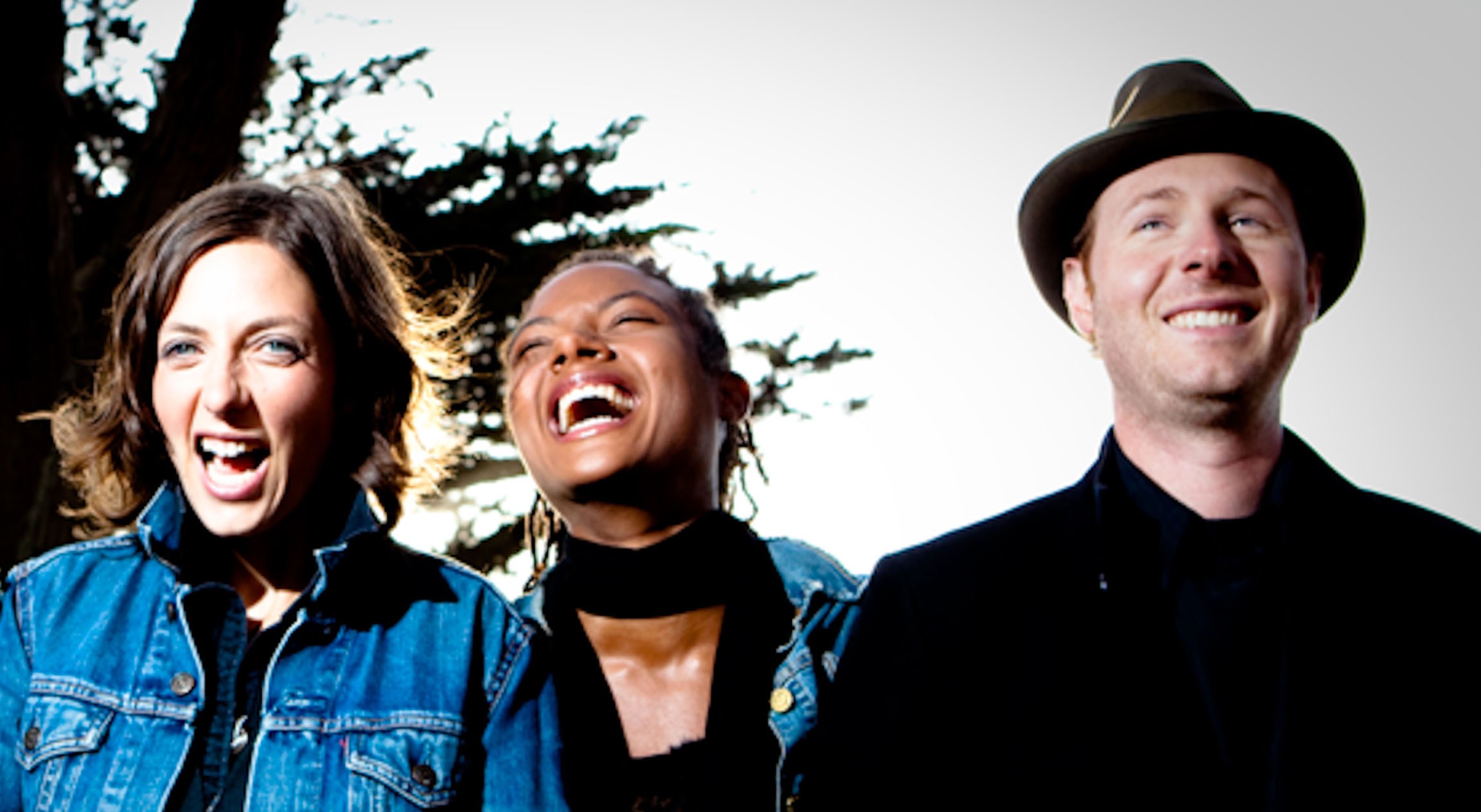 It started 10 years ago with a short-term collaboration between Allison Russell from Fear of Drinking and Trish Klein of The Be Good Tanyas. That eventually spawned the Canadian "urban roots" combo Po' Girl. Trish has since moved on, leaving Allison to work with a series of like-minded musicians, currently including Awna Teixeira and Benny Sidelinger.

What's a Po' Girl? They explain on their Web site, "The name Po' Girl is a nod to the women of New Orleans who at the time of the railroad strikes gathered scraps of food from the restaurants and delivered the notorious Po' Boy sandwiches to the men while they were striking. It's a nod to the solidarity of the workers, as well as to all the musical influences that came out of New Orleans that have shaped Po' Girl's sound."

Not that they're limited to N'Arlins sounds: Their latest disc Follow Your Bliss draws on all sorts of folky roots music. A song by Allison, "When We Are Love," rides on a blues groove as she sings of love, love, love as "a vast galaxy, but a speck in the dark. When we are love, we can burn bright before we go out -- sunlight on spider webs heavy with rain, stretched across the front gate, torn and spun again and again." Po' Girl keeps spinning that loving web.

Opening the show at the Playhouse is sweet singing JT Nero, who, according to his MySpace, "has single handedly re-invectified the spiritual matrix of early 21st century Chicago with one single hand." (His debut album is called With His Other Hand.)

A Thursday Folklife show at the Playhouse features the Gonzalo Bergara Quartet, led by the Argentina-born Bergara, a master of Django-style gypsy jazz who used to play with John Jorgensen.

French sisters Hélène and Célia Faussart make up the jazzy hip hop duo Les Nubians. When they were younger, the girls moved to Chad with their parents, absorbing musical influences and makeup tips. Upon returning to France they put together an a cappella act, hitting poetry slams and clubs in Paris and Bordeaux and singing backup vocals for an international array of artists. In 1998, they dropped their debut, Princesses Nubiennes, and started making bigger waves: They hit the Billboard R&B charts in the U.S. (rare for a French group) and even garnered a Grammy nomination for their song "Je Veux D'la Musique" (I Want Some Music). They're currently on tour behind a new Nü Revolution EP, playing the Monterey Jazz Festival and Yoshi's over the weekend before stopping at the Red Fox Monday on their way to Portland. The local show includes an opening set by Ishi Dube with Rude Lion Sound.

Same night at the Pearl Lounge, Bad Kitty presents Ruby Dee and the Snakehandlers, a four-piece from Austin mixing Texas honky-tonk and Western swing with Bakersfield twang, rockabilly and plain ol' rock. According to Norm (one bad cat), "This show is something of a homecoming,as Ruby attended HSU in the ’80s, and legend has it she was central to the Earth First! effort here at that time." Austin Alley opens (Norm's the bass player).

This Thursday's twang-athon at Humboldt Brews with Tapwater and The Bucky Walters is another homecoming of sorts. Tapwater, a self-described "world twang" band from San Diego, includes two HSU alums and former local scene heavyweights, Simon Lucas (on drum kit) and Rudy Slizewski (on pans and percussion). As Bucky's Bryan Osper notes, this will be the second time the two bands share a stage at HumBrews, "the first time being back in about 2005, long before there was a thing such as world twang, on the stage in the old front room by the window." (Side note: While I caught some great shows in that window space, the new dedicated music room is way better. Good job, HumBrews.)

You expect rock bands to do covers; with bar bands, sometimes that's all they do. A more rarified take on the concept is the "tribute band," with a focus on just one band or artist. There's a convergence of local tribute bands coming up: Friday at Humboldt Brews, the Tom Petty and the Heartbreakers tribute Full Moon Fever joins forces with the Neil Diamond tribute The Solitary Men for an evening of tribute fever. Then, on Saturday (post-North Country Fair), Wepeel offers its "loving" tribute to the esoteric songbook of Weezer alongside a set by hard-driving Portland punk trio The Interlopers.

Dubstep? Thursday at the Red Fox, Future presents UK stepper Propa Tingz plus Selector Science, from Bare Bulb Lab in Point Arena, and Boss Levelz. Visuals provided by C.J. (who I believe is also a member of Wepeel).

Thursday, at the Arcata Theatre Lounge, two Portland bands, Gratitillium and Hosannas, meet up with two local bands, Strix Vega and White Manna, with big screen visuals by Kevin Cheli-Colando and Ratrace. Ex-folky Nick Caceres leads Gratitillium, whose name somehow relates to "gratitude for animals" and animal visions he had in the music's formative stages. Brothers Brandon and Richard Laws are the core of Hosannas (formerly known as Church), with Christof Hendrickson on vintage synths and Lane Barrington on percussion. They draw on disparate sources, ranging from The Beach Boys and Kraftwerk to tribal rhythms and Bollywood soundtracks. We'll assume you know something about Strix Vega and psyche-rockers White Manna. (BTW, W-Manna also plays Thursday, Sept. 23, at the new Hunter Plaid Gallery with Starving Weirdos and the mysterious Daniel Higgs).

On the CD release front you have two very different choices: Rapper Hiway from The Thic Family has two CDs coming out on Beautiful Boi Records and is throwing a celebratory party at the Red Fox Friday with guest slots by Elision, Oeb, Tony Mac, Acufunkture and Hiway's other band, Never Die. Then, on Saturday, international folk dance band Chubritza (who toured Israel this summer) mark the release of their second album of dance music, Opsa! with a dance party at Redwood Raks. They've invited some Bulgarian friends -- Vassil, Maria and Didi Bebelekov -- to join the fun. Yes, there will be dancing!

102-year-old uke player Bill Tapia was supposed to play a CenterArts show this weekend, but he's not feeling so well, so instead we get an evening of Hawaiian-style guitar Saturday at the Van Duzer with slack key masters Rev. Dennis Kamakahi, George Kahumoku Jr. and Jeff Peterson (a logical enough replacement).

This Sunday is apparently International Talk Like a Pirate Day (arrrrg, do we hafta?), and Fortuna Music Mart is celebrating with a Pirate Parking Lot Party at their Eureka location (on Broadway) with music by DJ Stir Fry Willie, Accufunkture and The Smashed Glass (who are easy to imagine as buccaneers).

You probably remember that, back in August, Old Town carriage driver Marty L'Herault lost control of his carriage when his horse Cinnamon was spooked by the sound of skaters nearby, leading to a gnarly crash. Friends of Marty are putting together a benefit at the Wharfinger Sunday afternoon to help with repairs to the carriage, lost wages and Marty's medical expenses. All of Old Town is chipping in, with Café Waterfront, Oberon, Hurricane Kate's, Avalon and Venlo Chocolates contributing hors d'oeuvres and others donating contributions for a silent auction. Music will be provided by an ad hoc trio, with Doug Shernock and Gary Davidson from Play Dead plus Joey Koches of UKEsperience, plus the David Young Trio and Josephine Johnson and Estuary Leviticous (aka Lyndsey Battle) from We Like Love. And isn't love what it's all about? We like it too.