Interview with a Sand Dollar 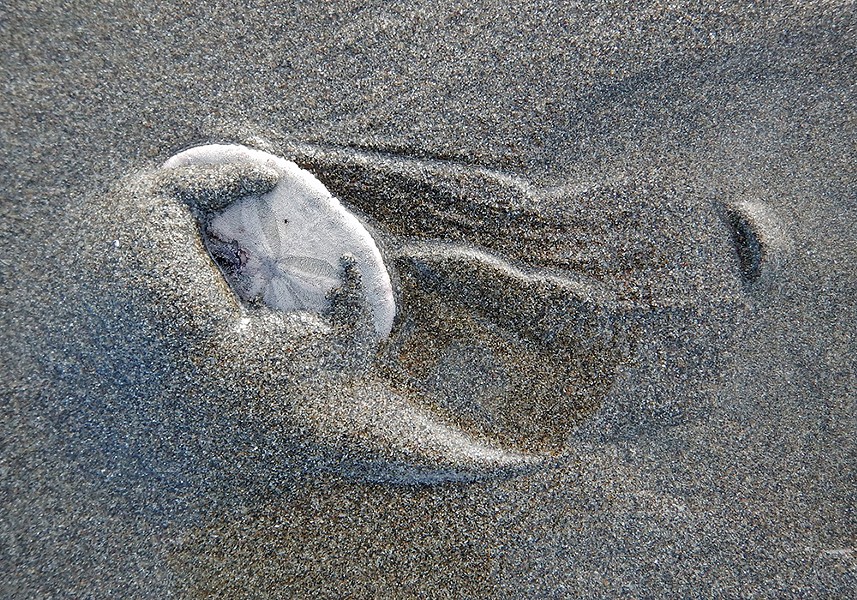 Photo by Mike Kelly The surface of a sand dollar.

Photo by Mike Kelly A weathered sand dollar with its five-petaled "test."

Things got a little "out there" last week and I found myself kneeling in wet sand having a conversation with a washed-up Pacific sand dollar (Dendraster excentricus). We talked about — you know — sand dollar stuff.

He was a male but I couldn't tell by looking. He was lonely and scared.

I said, "Hey, maybe I can throw you back out there. You sand dollars go really far because your slightly domed shape generates lift."

So he granted me an interview.

"All male sand dollars are named Dolly, and all females are named Sandy. Individuality isn't our bag, man."

"Well Dolly, readers will want to know how you have sex and what you eat — especially if there's cannibalism involved."

"Oh yeah, man, the sex is great! We live in colonies — mine is the size of a football field. And we get it on together all at once! In the late spring or early summer, the chicks discharge their eggs through their gonopores and we dudes simultaneously protrude our genital papilla to make some babies. Aw yeah ... ."

"Man, you gotta try it. Get a few thousand friends on a football field, then dig yourselves in a bit so you overlap like shingles and then everybody just releases."

"Well, I might know a couple of guys who could pull it off. But human women don't spontaneously ovulate into the atmosphere," I said.

"We sand dollars basically feed on whatever organic stuff deposits on us. It could be little crustaceans, bits of algae, fish eggs, various turdy materials. ... We aren't too finicky, man. As long as we can transport it to our mouth with our various appendages, down it goes."

"But you don't appear to have appendages," I said.

"We have lots of short ones. We are actually a type of sea urchin, so we have little pinchers, movable spines and even little tube feet with suckers on the end. You gotta look close though, man," explained Dolly. "Otherwise we just look fuzzy."

"How do you know you aren't eating your own babies?"

"Funny thing, man. Our eggs have a coating so we don't recognize them as food. But our swimming larvae go down the hatch like anything else. But each lady sand dollar releases about 250,000 eggs. And get this: The larvae can actually clone themselves before they settle. So there's plenty to go around, man. Billions of them are doomed anyway, so what the hell."

"I think most people are only familiar with your shells," I said. "People like to collect them because they are so beautiful — especially that five-petal flower pattern."

"Yeah, thanks man. That shell is called our 'test.' And the flower pattern is made up of pores through which little tube feet gather dissolved oxygen. It's how we breathe."

"So, you breathe through your feet?" I asked.

"Call it what you want, man, but that's just misleading."

Dolly was getting cranky, so we said our good-byes and I threw him seaward. But I got a bad angle on a gust of wind.

Dolly's arc took him back toward the beach and he smashed on some poor child's head. I ran into the dunes before the mother saw me. But I'll never get Dolly's screams out of my head.