Invention of the Alphabet (Part 2) 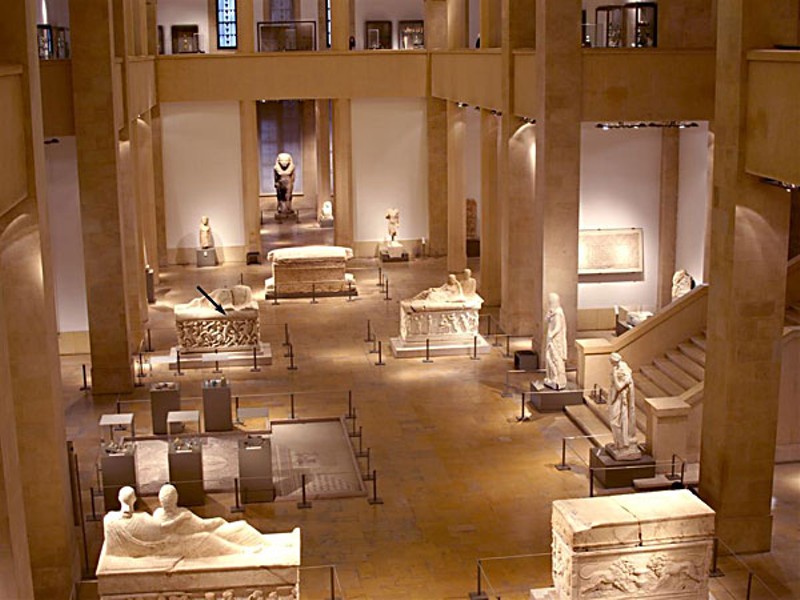 Part of the 38-word inscription, dated to about 1000 BC. Author photo

Read any account of how the alphabet came into being and you'll find a reference to the sarcophagus of Ahiram, king of Byblos (modern J'beil, Lebanon) around 1000 B.C. The stone sarcophagus has been housed in the National Museum of Beirut since shortly after its discovery by French archeologists in 1923. From 1982 to 1997, this historical treasure was sheathed in reinforced concrete while fighting raged all around -- literally. The museum was on the demarcation line between opposing forces in Lebanon's 15-year civil war and was used as a troop barracks. Today, the sarcophagus takes pride of place just inside the entrance of the newly rebuilt and refurbished museum.

The importance of the sarcophagus lies not with the king who was once interred inside, nor in the ornate relief scenes on its sides, but in the writing carved around the cover. The 38 words recorded here represent the earliest recorded inscription of any length in the Phoenician alphabet. They are a warning to anyone who uncovers the sarcophagus in the future: ... may the throne of his kingdom be overturned, and peace and quiet flee from Byblos ...

Our alphabet has its origins in the Phoenician alphabet. Phoenician wasn't quite the first "linear" script (Ugaritic -- from ancient Ugarit in present-day Syria -- preceded it, for instance), but it's the script from which most modern alphabets are derived, since it led to Aramaic (the lingua franca of the ancient Mediterranean world). Aramaic was adopted by the Greeks who gave it to the Etruscans. When the Romans conquered the Etruscans around 400 BC, they adopted the script of their subjects. And it's a (fairly) small step from Latin letter forms to our 26-letter alphabet.

Like modern Hebrew, the Phoenician alphabet was all consonants, so vowels had to be interpolated by the reader. This rarely led to confusion -- mst nglsh wrds cn b ndrstd wtht vwls. The earliest vowels were added by early Aramaic speakers, using letter shapes already in use. For instance, they took the Phoenician bull's head symbol for a glottal stop (the middle sound in Cockney "bo'el," bottle) and used it to indicate the vowel "a." "Bull" in Semitic is "alpu" (Ugaritic) or "elef" (Hebrew), which became the meaningless word "alpha" in Greek.

The derivation becomes clearer if you take an uppercase letter A and turn it upside down. Add a couple of eyes and you've created the original bull's head from which the first letter of our alphabet is derived.

Barry Evans (barryevans9@yahoo.com) and his wife recently spent the better part of a day soaking up history in the National Museum of Beirut. They live in Old Town Eureka.