Is Happiness a Warm Musical?

NCRT goes Peanuts for the holidays 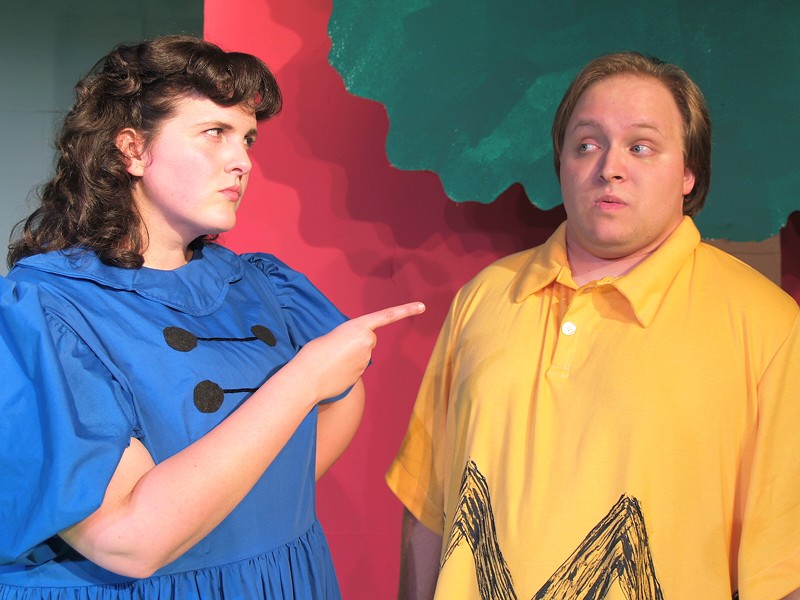 After Nancy and Sluggo and before there was Doonesbury, the bright spot on the comics page was "Peanuts." Named after the "peanut gallery" on Howdy Doody in the 1950s, the popular daily strip broke out of newsprint to become best-selling books (Happiness Is A Warm Puppy), animated films and a couple of stage musicals, which along with much merchanise made creator Charles Schulz a billionaire.

You're A Good Man, Charlie Brown, now on stage at North Coast Repertory Theatre in Eureka, was the first of the stage musicals. A modest Off-Broadway production had a good run in 1967, but neither the 1971 nor the 1999 version was a Broadway hit (though actors won awards.) It prospered instead in national tours and many amateur productions over the years. Lately it's also been revived by financially pressed professional theatres (including Canada's Stratford Festival) in their efforts to produce more remunerative musicals.

The script, music and lyrics were all written by Clark Gesner (with additional music in the 1999 version by Andrew Lippa) but the musical quotes liberally from the original Schulz comic strips. The show attempts to transfer the strips to the stage, resulting in a few sustained scenes and a lot of short bits, like a vaudeville show or Laugh-In about kids.

Though some productions try to make this world more contemporary with video games and so on, director David Moore wisely chooses to stick with the vague 20th century timeframe of the comics.

The actors all embody their characters nicely — there's no problem believing in them as their cartoon counterparts. On opening night their songs and dances were enthusiastic, and their dialogue in the major scenes was engaging. There seemed less energy and focus in the comic bits. With better timing and vocal emphasis, some of the bits could be funnier.

Staging some of the comic strip's greatest hits may be a pleasant reminder of its original effects, and seeing how these iconic characters are realized on stage is part of the fun. But the presence of live actors seems to cry out for more of a story — that is, more of a play. The framework of a day in their lives seems wobbly and unsatisfying.

Actually replicating the effects of the comic strip is a different question. There seems some cognitive dissonance in seeing live adult people pretending to be children, who enact the classic Schulz maneuver of children who talk like adults. Though there are moments of feeling that reach back to childhood, some of the angst expressed on stage seems more appropriate for adolescents rather than young children, at least before the age of the hyper-scheduled, media-saturated grade schooler. Somehow this isn't a problem in the self-contained yet richer world of the comics.

For ardent fans of the Peanuts characters and other audience members, none of this may matter. In his program notes, director Moore makes the case that Schulz's stories "showed us ourselves, with all our flaws, and made it funny. He helped us see the poetic beauty in our sadness and misery. The Good Grief."

The show should provide the holiday season entertainment this scheduling proclaims it to be. Thanks in part to television reruns, the Peanuts gang is already associated with the Christmas season.

You're A Good Man, Charlie Brown plays weekends at NCRT through Dec. 14.

When Black Friday comes (Nov. 29, the day after Thanksgiving), Ferndale Repertory Theatre will open the Meredith Wilson musical The Music Man. It's directed by Dianne Zuleger, with music direction by Elisabeth Harrington, Nan Voss and Bill Edmondson, and choreography by Linda Maxwell.

Also on Nov. 29, Dell'Arte opens its annual holiday show, which this year is a re-invented version of Victor Herbert's Babes in Toyland. It's directed by Michael Fields with music by Tim Gray, including his hits from past Dell'Arte shows such as Blue Lake: The Opera and The Comedy of Errors. It starts in Dell'Arte's Carlo Theatre for the first weekend and then travels up and down the North Coast with free shows until it returns for a final weekend in Blue Lake.

More on these and possibly other holiday shows next time.