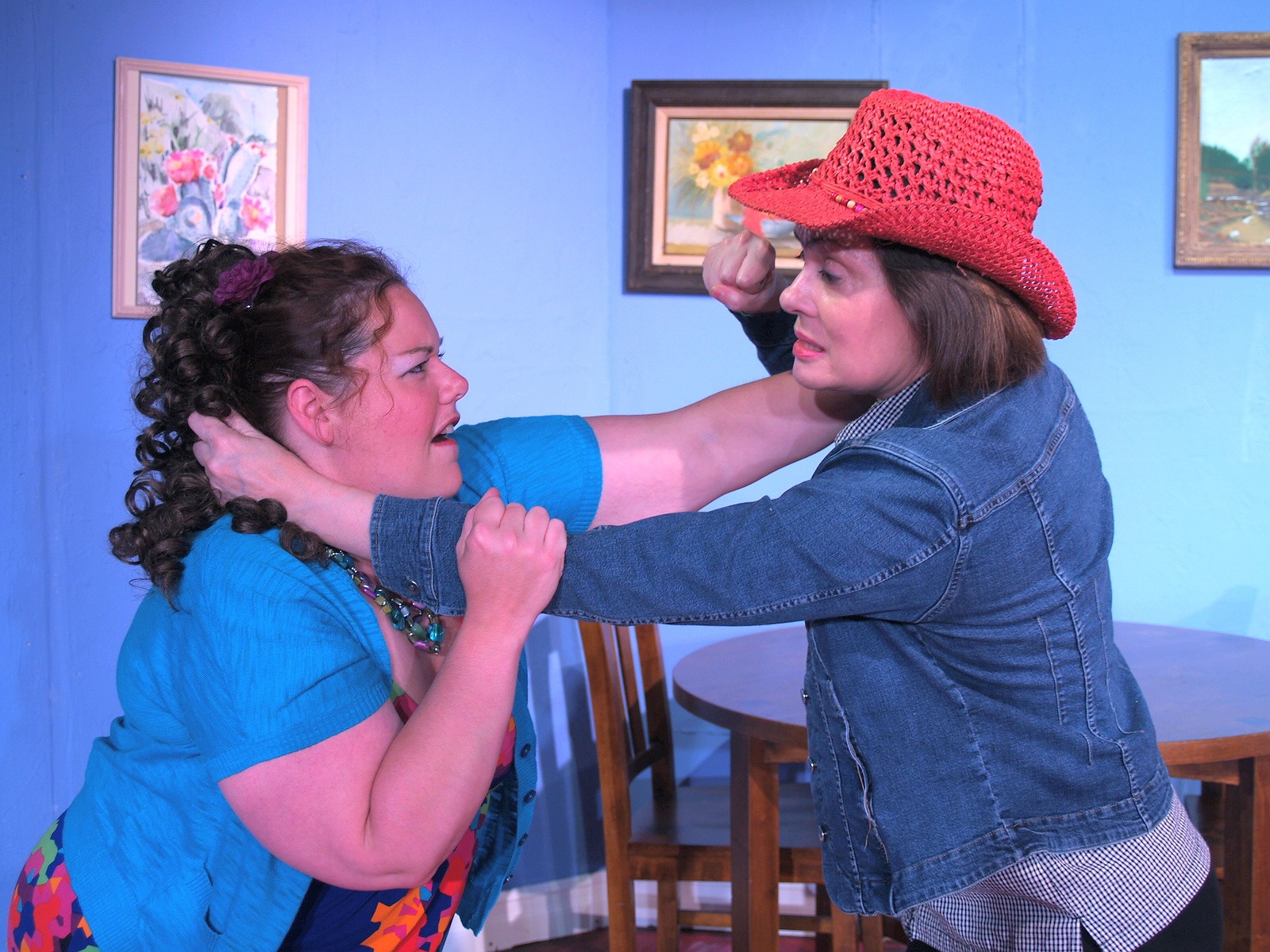 The Red Velvet Cake War is the summer comic confection now on stage at North Coast Repertory Theatre in Eureka. The Verdeen girls -- Gaynelle (played by Jacqui Cain), Peaches (Denise Ryles) and Jimmie Wyvette (Gloria Montgomery) -- live in the small Texas town of Sweetgum. They chafe under the domination of the family matriarch, Aunt La Merle (Toodie SueAnn Boll) whose basic attitude is "you can agree with me, or be wrong." Family trouble, man trouble and cake trouble ensue. If that sounds funny to you, it is. If it doesn't, well, it's still pretty funny.

To be sure, these are more akin to joke-transmitting caricatures than characters. They are so deeply cliched that we know Elsa Dowdall (played with panache by Janet Waddell) is a psychologist because she speaks in a German/European accent, which in the real world hasn't been new or particularly likely for decades. And of course she's repressed.

But the actors bring individual touches to these stereotypes and animate them. Gloria Montgomery is particularly deft at physically embodying the tomboy cowgirl, Jimmie Wyvette. She might be the one character you want to know more about. Arnold Waddell as the elder Verdeen delivers several of the funniest lines with a curmudgeon's delight, and Matt Cole as the would-be hero is outstanding in a role you can pretty much see the young Tim Robbins playing.

Not that the televised familiarity of these characters matters much. Because what they do -- and particularly what the say -- is funny. The Red Velvet Cake War was written by the team of Jessie Jones, Nicholas Hope (past winner of the Texas New Playwright Award) and Jamie Wooten. Not surprisingly, they've all written comedy for television, including for the classic Golden Girls and shows on every cable channel from USA to Fox. As a team they specialize in stage comedies about the South, especially Texas, tailored for community theatres. According to their website, this play has been widely produced, from Plant City, Florida and Brick, New Jersey to Baraboo, Wisconsin and Blind Bay, British Columbia. It's even spawned a sequel, Rex's Exes.

The dramaturgy of this play is paint-by-numbers but the playwrights know their (all white) milieu, and are admirably adept at creating humorous language without being exploitive or insulting. While the wit is even subtle at times (including some of the copious vulgarity), the physical humor is time-tested farce and slapstick. The plot however is an increasingly incredible and wearying mashup of reality show colliding with sitcom.

The verbal humor is especially sharp and frequent in the first act, before the mayhem punctuated by exposition takes over in the second act. Catastrophes mount unbelievably and with very little at stake, and it starts to feel like you're clicking through cable TV hell -- with the comfy sitcom resolution, of course. So in the end there's little to say about this show except that it's wildly funny at times and it's basically good-hearted fun while it's happening.

Director Gene Cole has apparently taken care to make sure the cast members exploit the particular music of this Texas accent while still making themselves understood. Again, this is particularly impressive in the first act, before the decibel level gets wearing. He also keeps the physical comedy pot boiling. The universally funny cast includes Shannan Dailey, Laurence Thorpe and David Simms. Calder Johnson designed the set and lighting, Jenneveve Hood the costumes, Michael Thomas the sound. The between-scenes music -- bright Texas tunes that sound like they're synthesized for a video game -- is especially twisted.

The Red Velvet Cake War continues at North Coast Rep Friday and Saturday evenings through Aug. 18, with Sunday matinees on Aug. 5 and 12.

This is the final production in the NCRT season. Their 29th season begins in September with a contemporary farce, Fox on the Fairway by Ken Ludwig. The classic Cole Porter musical Anything Goes is followed by David Mamet's drama American Buffalo. Next year's Shakespeare is The Tempest, preceding the contemporary rock musical Next to Normal and the contemporary non-Southern comedy, The Tale of the Allergist's Wife by Charles Busch.