Is the Great Wall Visible from Space?

"... The Chinese Wall, which makes a considerable figure on the terrestrial globe, and may be discerned at the moon." 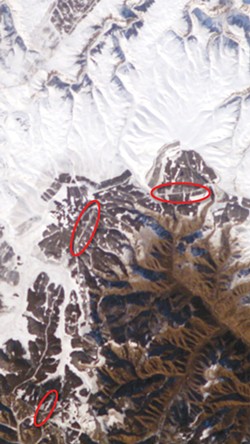 Such was the opinion of Rev. William Stukeley (1687-1785), who was as wrong about seeing the Great Wall of China from the moon as he was about Druids building Stonehenge. No matter; it's a good story, one that wasn't fully negated until Apollo mission astronauts looked back at the Earth from the moon and saw "a beautiful sphere, mostly white, some blue and patches of yellow, and every once in a while some green vegetation ... no man-made object," according to Apollo 12 Lunar Module pilot Alan Bean.

To put this in perspective, literally, remember the last time you had an eye test, trying to make out those letters and numbers on a Snell chart? The bottom line (Snell 6/6, letters about one-third of an inch high, from 20 feet away) is about at the limit of human seeing. Put another way, our eyes have an angular resolution of about 1 minute of arc, meaning that the bottom line of a Snell chart on the moon would have 120-mile-high letters, with strokes 24 miles wide.

Seeing the 16-foot-wide Great Wall, (supposedly designed for four horses side by side) from the moon would be equivalent to making out a human hair from two miles away. Forget even making it out from the International Space Station, 1,000 times closer to us than the moon when they're both overhead. The wall would still need to be over 100 feet wide to be visible. How about the pyramids of Egypt? Yup — Cheops' Great Pyramid is about 750 feet along its base so no problem seeing that.

The problem with making out the wall from space is twofold: Besides being comparatively narrow, it's built from the same material as the surrounding land, so there's little contrast. Fifteen years ago, American astronaut Leroy Chiao took the accompanying photo of central Inner Mongolia with a digital camera using a 180 mm telephoto lens (the human eye is equivalent to a 50 mm lens). Conditions were perfect: fresh snow and bright sunlight. In the photo, you can make out short sections of the wall but Chiao reported that he was unable to see it with the naked eye.

Not that this disparages the near-miracle that is the human eye. While other animals have sharper vision than us (birds of prey can see about eight times as far as we can) and are more sensitive in darkness (frogs can see individual photons), our eyes are pretty much optimized for our well-being. It's hard to see how the ability to make out the Great Wall from space adds anything to the long-term survival of our species.

Incidentally, the Great Wall stands out quite clearly in the radar images taken from the Space Shuttle Endeavour. That's because, instead of recording reflected colors like a photograph, radar is sensitive to roughness, and the top of the wall is smooth compared to its surroundings.

So next time you're playing Trivial Pursuit and the question is, "Can you see the Great Wall of China from Space?" Just say no.

Barry Evans (barryevans9@yahoo.com) still wonders if you dig a hole deep enough, will you come out in China?