It Ain’t Easy Being Green (Or Is It?) 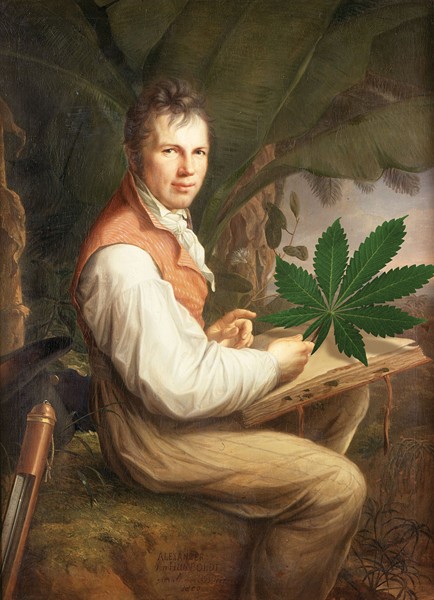 I imagine it freaks out the Chamber of Commerce and Visitors Bureau folks -- it certainly goes against their plan to "rebrand" Humboldt -- but 4/20 weekend is becoming an ever bigger deal locally. There's even a chamber-esque business alliance banded together for something it calls Humboldt Green Week (the second annual) combining Friday's unofficial pot-smoker holiday with Earth Day to celebrate the greenness of it all. Northcoast Horticultural Supply (NHS) is central, alongside businesses like Humboldt Wholesale and Foxfarm, food producers including Cypress Grove, Los Bagels and Humboldt Grassfed Beef, a handful of clothing companies, Humboldt Glassblowers, Lost Coast Communications, Humboldt Waste Management Authority and some of our major music promotion/production houses.

As HGW organizers put it: "Humboldt Green Week celebrates Humboldt culture. ... Our goal is to build a festival that puts Humboldt County on the map as an event destination, where we can connect with our neighbors through our devotion to the environment and our passion for art and live music."

So while the local police are calling in reinforcements to fend off invading hordes of herb lovers, the green crowd is throwing parties and welcoming them with open arms.

Humboldt Green Week is already under way: the Passion Presents Yonder Mountain Stringband show at the Arcata Theatre Lounge on Wednesday, April 18 is part of it. Passion also has a Thursday HGW show at the ATL, the headbanging (female) Led-Zep tribute Zepparella, with local Talking Heads tribute Naïve Melodies opening.

Of course Friday, April 20, is 4/20 and every club in town has something going on. We'll start with the official HGW shows: Melvin Seals and JGB are at the ATL "continuing the musical legacy of the Jerry Garcia Band," which makes this sort of a tribute, except for the fact that Melvin was the organ player for JGB. At any rate, you can expect G-Dead material for the tie-dye crowd. Of course reggae and 4/20 go together: The Jambalaya has Brooklyn-bred, Bay Area-based Rastaman Rocker T dropping rhymes over one-drop beats laid down by his irie friends from Jah Warrior Shelter High Fidelity sound system. The Red Lion has 420 Funk Mob (basically Parliament/Funkadelic without George Clinton) with local funksters Bump Foundation opening. Bassheads will be at the Nocturnum Friday for the World Famous "4.20 Two-Stage-Bass-tacular-Celebration," an evening of bottom-heavy electronica with EPROM, B. Bravo & The Starship Connection, Clicks & Whistles and Zanapod on the Surefire Stage; Sugarpill, +verb, Chris B. and PsyFi manning the Headtron Stage.

Circus of the Elements Fire Fusion 4/20 at the Mateel brings together fire artists, musicians, dancers, etc. on three stages for an all-day (noon-1 a.m.) fire-fueled event. On the music side: Jake Brake (a Rooster McC spin-off), Jenifer Breeze Band‚ No Good Redwood Ramblers‚ St. John and the Sinners‚ Mighty Redwood Ambassadors, Green Machine, Animal Eyes and Kindred Spirits. The Circus of the Elements fire arts show with SambAmore comes after dark (outside) followed by Blue Angel Burlesque‚ Bada Bling Burlesque and Aerial Dance Circus (inside) and a dance party with DJ Knutz and Hemptress Haiku.

Sewell Gallery has a Friday soul/folk show with Berel Alexander and friends, including the ladies of Vidagua. BTW, if you got an email from Berel asking you to send money to Scotland, it came from some hacker, so don't.

The Ocean Grove has an all-local 4/20 triple bill with Gunsafe, Splinter Cell and The Bandage. Down the road in Trinidad that night Cher-Ae Heights Casino has the "notorious" Vince Neil, former Mötley Crüe frontman, whose latest record doubled as the soundtrack for his autobiography: Tattoos & Tequila: To Hell and Back with One of Rock's Most Notorious Frontmen.

Blues diva Sista Monica plays for the first time at the Riverwood Friday. (Bluesoholic alert: Tommy Castro and The Painkillers are at Riverwood May 7. Tickets on sale April 18. Act quickly or miss out.)

Not really related to 4/20, but also on Friday:

The Country Pretenders do their "deep country" thing at the Arcata Playhouse Saturday night with Marc Jeffares from The Trouble opening. (The Trouble plays 4/20 at Mad River Brewery).

April 20 is also the next Missing Links Soul Night at Humboldt Brews; I believe the first time they've done it on a Friday. It also happens to be the day before Saturday's Record Store Day, so it should be a vinyl-tastic weekend for Matt ‘n' Adam.

Speaking of vinyl: DJ Red spins old school hip hop Saturday at the Jambalaya with help from DJ Zephyr (aka Bandon of The Works) and Fade (aka Trask from Stars). Red figures, "Rap music reached its zenith in '92." He promises "gems from that era."

Thursday at the Jambalaya, local string-slingers Absynth Quintet open for Colorado's Grant Farm, with national flatpicking champ Tyler Grant out front. Apparently AQ and GF are friends due to a connection involving the Emmitt-Nershi Band, a banjo and a trip to Minnesota -- so says AQ's Ryan Roberts.

HSU's Sustainable Living, Arts, and Music Festival (aka SLAMfest) seems to have downsized a bit with CCAT taking over a lot of it. They'll have Earth Day-ish activities all day on campus Saturday with a show at the Kate Buchanan in the evening with a bunch of world music, DJ Spaceman Spliff, Soul a Mente and Liquid Kaktus.

Also on Saturday (afternoon into the evening) in the E&O Bowl parking lot, a Humboldt Fog Dogs biker benefit BBQ for a friend with kidney trouble with Jimi Jeff and The Gypsy Band followed by Sacto biker faves The Fryed Brothers.

Other Saturday fundraisers: River Night! at Portuguese Hall, with The Bret Harte Breakers, Steel Standing, Small Axe Ensemble and DJ Max Michael with proceeds going to the Boys and Girls Club's Summer LEAP program. Dance Ink Day is a four-hour dance marathon at Redwood Raks with a slew of dancers raising funds for the Ink People.

"Sisters & Sirens" at Humboldt Brews is a Sisters of Perpetual Indulgence thing featuring the "Riot Folk" tour with cellist Bonfire Madigan, Evan Greer and Adhamh Roland, plus The Grass Band and DJs for dancing.

Back to Green Week: Saturday they have a McKinleyville Skatepark benefit, an all-day, all-ages party at Miller Business Park in McK with skate ramps, music, beer, etc. That night local conscious hip hop crew Area Sound celebrates the release of an eponymous CD with a HGW show at the Red Fox with special guests Berel Alexander, ?Luscious Ladies and Never Die, backed by ?B Swizlo's Hip Hop Lounge.

Sunday, Earth Day, HGW joins up with the Surfriders and Baykeeper for a beach cleanup on the North Jetty. Silver Hammer plays Beatles tunes that afternoon for a "Family Fun Fest" at Six Rivers, and there's Deep Groove's Sundaze at the Jam with Motion Potion.

Tuesday there's a greenish art show at Merryman's Beach House (by Moonstone Beach) with a "silent disco" soundtrack by Random Rab. Green things roll over to next weekend too, ending with a Saturday/Sunday Humboldt Garden Expo at the Blue Lake Casino. More on that next week.

New Horizons continues Tuesday with a CenterArts concert in the Van Duzer by the always-amazing Kronos Quartet performing works by Syrian composer Omar Souleyman and Laurie Anderson among others. Wednesday, it's back to Fulkerson Hall where the Redwood Jazz Alliance presents Rez Abbasi's Invocation Quintet, led by Pakistani guitarist Abbasi, who mixes Indian and Qawwali music with American jazz as part of a jazz globalization movement.

On another horizon: Max Brotman and Willoughby Arevalo, the analog dub/dance-noise duo aka Kunchry Bwoys, are on a West Coast tour that includes an all-ages Placebo show Wednesday evening at the Ink Annex with Tabloid, DJ Knutz and (maybe) The Janky Mallets. Dub onward bwoys!