It Ain't Over 'Til It's Over 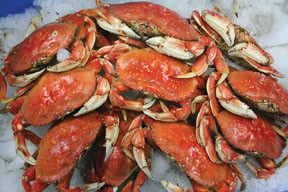 Sure, the season's past its peak. You've already satisfied that exquisite anticipation that begins to grow after Thanksgiving of savoring the first tasty morsel of succulent crab meat, but there's more to come according to local fisherman Jeff Angelo. And lucky for us, living in Humboldt County we are in the mother lode, the middle of Dungeness crab central.

Being a crab fisherman is more than a vocation -- it's a way of life, and the North Coast is a good place to be if it's in your blood. Far before the advent of our modern fishing fleet, from the Crescent City area on down the coast to Shelter Cove, the Tolowa, Yurok, Wiyot, Mattole and Sinkyone tribes traditionally harvested crab. In 1848, a year before the Gold Rush, a commercial fishery began when Italian immigrants in San Francisco brought crab to market. As many enterprises sprang up around the rush, their business increased as rapidly as the search for gold. Landings in Humboldt County are recorded as far back as 1889, with 86,400 pounds of crab caught that year.

Fast-forward to 2010, fishing out of Eureka, Angelo, captain of the Chief Joseph, says he plans to "scratch it out" for weeks to come, which is good news for us. On one of his rare sunny afternoons off I went to the docks on Woodley Island to talk to Angelo about crabbing here in Humboldt. He was fixing a broken bilge pump that day and waiting for a diver to come and cut fishing line that was twisted up in the prop. These glitches -- along with rough weather -- are the only things that keep Jeff and his crew on land these waning days of winter.

Born in Brentwood, Angelo began fishing in 1986 after a stint in the Army. He started in Bodega Bay on the Becky, working with his brother, who still bears a tattoo of that boat's name on his arm.

"I was living on the boat and the boat came up here," Angelo explains. He then fished for legendary Eureka skipper Griff Savage from 1996-2005, taking over the worthy Chief Joseph when Savage passed away.

It's not an easy way to make a living, that's for sure, as I can testify from personal experience since my husband Scot, the son of a fisherman, is a member of Angelo's crew. There are the good seasons, the bad seasons and the nonexistent seasons. So far, this has been a pretty good year in Eureka, a port with the added challenge of having to pass through the entrance of Humboldt Bay. "We can't get out of here when the bar is breaking across the entrance. We have to go with the tide," says Angelo. "At times constant breakers are coming across the jetties, white rolling breakers. You can't go through some stuff. You're rolling too violently to be safe."

These days Angelo and his crew wait for the good weather, as the Chief Joseph continues to be catching a few. Scot has faith in Angelo, often exclaiming, "Cap is a good fisherman. He knows where the crab are," although I am told to keep it quiet. It's supposed to be a secret.

Angelo let me in on the definitive way to cook live crab. His wife Pam is certain the secret is seawater. Yes, he actually boils the crab on the boat in seawater and brings it home for dinner. If you don't happen to have any seawater handy, add a handful of salt, or better yet, a cupful of rock salt per gallon of water ("It brings out the sweetness of the crab," says Angelo). We sub Kosher salt, bring the salty water to a full boil, then add the whole live crabs, making sure they are submerged, bring the pot to a boil again and cook for 20 more minutes. While some suggest chopping the crab in half and pulling the back off before cooking, Angelo warns, "That is hard for the average person. I don't back them. I think there is more flavor if you cook them whole."

Crabbing is one of few things that Angelo has never burned out on. "We eat crab all the time," he tells me. And so do we. We enjoy fresh-cooked cracked crab with Brio or Co-op bakery sourdough. Sometimes I'll mix it up by using Los Bagels corn rye -- its wonderful bite complements the sweetness of the crab the same way as traditional sourdough.

Champagne is lovely with crab -- if you want to stay local try Briceland Vineyards Brut. White wine is good too -- a great local choice is Sauvignon Blanc from Moonstone Crossing or Fieldbrook Winery. Any of our fine local microbrews are good too -- in particular Lost Coast's Great White and Mad River's Steelhead Pale Ale seem to compliment crab really well.

Here are few simple recipes using the delectable crab meat that is still readily available as we approach spring. (The crab dip is a crowd pleaser. The guys at the dock -- the crabbers themselves -- ask for it every year.)

Cook 30 minutes, until hot and bubbly.

Serve with sourdough rounds or on a bed of lettuce with Brio croutons.

Or make your own croutons:

Sauté in a frying pan over low heat.

Dip the tortillas in the saucy pan to soften them.

Roll up 2 spoonfuls of crab in each tortilla.

Place rolled enchiladas in a casserole dish side by side.

Covered with foil and bake for around 30 minutes.

Remove foil and cook for 5 more minutes until cheese is bubbly.

Slice a baguette or loaf of Brio or Co-op sourdough in half lengthwise.

Scoop out some of the middle of each half.

Spread with a touch of garlic butter.

Fill one side with fresh crab meat, the other half with thinly sliced Loleta Cheddar cheese.

Put the halves back together and coat the outside of the loaf with olive oil.

Put on a baking sheet and bake at 350 until the cheese has melted.