It's a Mad, Mad World Out There

Dell'Arte's Around the World in 80 Days 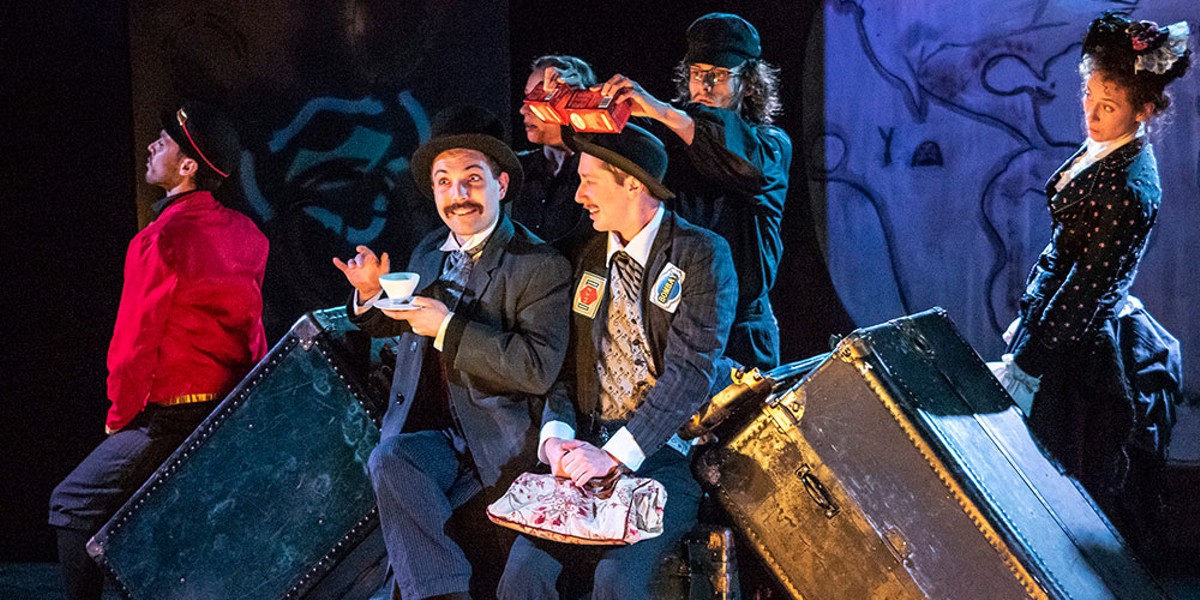 Steamships and railroads ushered in an era of mad adventuring in the 19th century, so it's no surprise that Phileas Fogg, a gentleman of means, decides to circumnavigate the globe. The difference is that Fogg, a member of London's progressive Reform Club, has been challenged by the club's president to complete his journey in no more than 80 days or be banished from the club forever.

You may think you know the rest of the story but this is the Dell'Arte Holiday Show version of Jules Verne's Around the World in 80 Days. And Dell'Artians do things a little differently.

Equipped with little more than £20,000 cash in a bag, an obsession with timekeeping and the firm belief that "an Englishman never backs down from a wager," Fogg (a delightfully Poirot-esque Jordan Rosin) meticulously plots out his itinerary. To support him in his endeavor, he hires the appropriately named Jean Passepartout (an acrobatic tour-de-force from Jesse March), whose primary talent is the ability to make a perfect cup of tea at the drop of a hat. The pair adopts — or is adopted by, it's never quite clear who's in charge of whom — the young Aouda (a worldly, wise Cleo DeOrio) who always knows the right way to go. But at every turn, they must avoid Miss Priscilla Fix (Kathryn Cesarz, channeling a manic Mary Poppins) who has been charged by her employers back at the Reform Club to prevent Fogg from completing his journey at all costs.

A multi-talented traveling ensemble (Evan Grande, Idit Kischinovsky, Alfredo Romero, and Melanie Schauwecker) morphs into trains, boats, even monkeys and elephants, complete with sound effects, and adds local color at every stage of the journey. While all four skillfully change costumes, characters and nationalities at a breathtaking pace, a few cameo performances stand out. Schauwecker is a wonderfully imperious president of the Reform Club. Kischinovsky is an impressive height- and language-challenged sasquatch (of course our travelers pass through Humboldt County). Romero excels as a bureaucratic Indian policeman and Grande's jungle monsters are masterpieces of creepy exotica.

Around the World in 80 Days is a madcap hour of fun that invites audience participation in true panto fashion. The journey is seamlessly stitched together by producing artistic director Michael Fields, assisted by Kaitlyn Samuel Rosin. Sound design and original music are by Brian Post and the cast, with atmospheric lighting design by Michael Foster, technical direction by James Hildebrandt and scenographic design by Lynnie M. Horrigan.