It's Not The Cheese 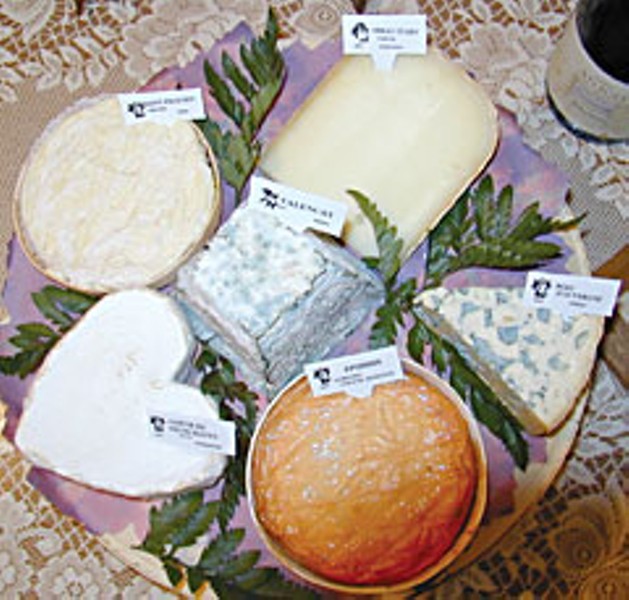 A pox on all your damned pasteurized cheeses!

There, I've said it! I am now the enemy of American cheesemakers, and you will doubtless hear from them in response to this column. Well, after all, they are colleagues and friends. But just as significantly, they profit from the U.S. Food and Drug Administration's delusion that no cheese is fit for consumption unless the milk has been pasteurized or the cheese has aged for at least 60 days.

Pasteurization is a process which facilitates the transportation and storage of dairy foods, and it is no coincidence that its adoption by the U.S. a century ago came at the same time that small farms began to be replaced by agribusiness.

On its face, regulation sounds pretty good — the FDA is, after all, looking out for our health, right? Here's what their own website says:

Got Milk? Make Sure It's Pasteurized!

Pasteurization, since its adoption in the early 1900s, has been credited with dramatically reducing illness and death caused by contaminated milk. But today, some people are passing up pasteurized milk for what they claim is tastier and healthier "raw milk."

Drinking raw (untreated) milk or eating raw milk products is "like playing Russian roulette with your health," says John Sheehan, director of the Food and Drug Administration's Division of Dairy and Egg Safety. "We see a number of cases of foodborne illness every year related to the consumption of raw milk."

More than 300 people in the United States got sick from drinking raw milk or eating cheese made from raw milk in 2001, and nearly 200 became ill from these products in 2002, according to the Centers for Disease Control and Prevention.

Raw milk may harbor a host of disease-causing organisms (pathogens), such as the bacteria campylobacter, escherichia, listeria, salmonella, yersinia, and brucella. Common symptoms of foodborne illness from many of these types of bacteria include diarrhea, stomach cramps, fever, headache, vomiting and exhaustion.

Most healthy people recover from foodborne illness within a short period of time, but others may have symptoms that are chronic, severe or life-threatening.

Is there any truth to this?

Yes. Babies or very young children who have not yet acquired a fully-developed immune system, very old people, or others whose immune system is weakened, may be susceptible to otherwise harmless bacteria. There is a bacterium that can cause fetal development problems during pregnancy. And "dirty" milk from Mexico is often made into queso fresco, which has caused tuberculosis in some Hispanics living in New York. But no normal, healthy, adult human has in the past 50 years died from eating French cheese, which is made with raw milk.

There is no online documentation available. But consider that the FDA is the same regulatory agency that has allowed literally tons of contaminated food into the country (from such proven corrupt sources as China, which it is unable to monitor). The same FDA has endorsed questionable pharmaceutical products whose efficacy and safety are supported only by studies financed by the drug companies themselves. The same FDA has recently strong-armed new rules that allow it to regulate the sale of herbal dietary supplements, but it has no authority over, nor interest in, alcohol or tobacco products.

Do you trust the FDA? I don't. Its hypocrisy — conflating raw-milk cheese with "bio-terrorism," for example — is exposed online in articles such as Julia Watson's "Don't Cut The Cheese," published by The National Interest and "Would You Like Cheese With That?" by Rebecca Ascher-Walsh in Fortune.

The fact is, industrial agriculture, global economics and "free trade" have a lot more to do with what is or is not inspected. Inconsistency is the only constant — industrial food manufacturers may be able to import contaminated soybean products from China, but a U.S. citizen can't buy a fresh Tomme de Savoie or Mimolette or Comté — legendary French cheeses, not approved because they are not aged long enough. (The reason we get Roquefort is that it happens to be aged three months.)

So are those wondrous young cheeses really rife with bacteria? You bet they are. Bacteria — and molds — are part of the cheesemaking process, and each of some 300-plus French cheesemakers has isolated and cultivated the particular strains that contribute to the specialness of their cheese. In most instances, they have thrived for decades in a particular cave or cheese shed. In fact, it is documented (The New Yorker, Aug. 23, 2004) that the native, beneficial bacteria are so potent, they actually attack and destroy alien strains. We do not have such a tradition, and we are the worse for it.

There are two Marin County cheesemakers who attempt to duplicate some of the subtle cheeses of France, following the FDA code — pasteurized milk exclusively. We loyally buy their cheeses (available at The Co-op), but they pale in comparison with true Camembert or Tomme de Savoie. "Mild" is too generous a term. Yet they are priced at over $25/lb, a measure of how skewed the market is for nascent cheese enthusiasts (by comparison, "Teleme," a soft, slightly tangy commercial cheese from Sonoma Cheese Factory, can be found on special at Murphy's Market in Sunnybrae for $5. No, not as good, but not that far off, either).

Naturally, California cheesemakers are not about to complain about French cheese being banned from American markets.

But perhaps "banned" is too strong a word. Restaurants and upscale stores in the Bay Area offer a variety of imports, and the affluent gourmet has no problem finding a young Morbier. If you live outside that charmed circle, $200 can deliver a selection of heavenly cheeses via FedEx from France. You simply have to do the research, and buy on faith. (Warning: there is one online French company — www.fromage.com — which cynically ships cheeses that have turned sour. Nothing unhealthy there, just unpleasant.) But money talks, and it buys real cheese.

A less expensive alternative is a small store in San Francisco that shall go unnamed — thank you, Lee Wakefield — which will ship an interesting selection of cheeses for $100. Yes, a lot of money. But French cheeses are so much better than nearly all domestic pasteurized ones that if you really love cheese, it's worth your while. (A notable exception is Cypress Grove, in Arcata, which at its best equals or surpasses French goat's-milk cheeses. That company's opinions were not solicited for this column.)

This has been the case for years. So why am I ranting now?

There is a threat of pasteurization enveloping all of Europe, as market share and product uniformity begin to press EU cheesemakers into conforming to U.S. standards. It is not hard to estimate the impact this will have — not just economically, for France, but culinarily, for the world. Already two of the three major Camembert dairies have switched to pasteurized milk in the interests of globalized marketing (though they disingenuously claim to have done so because of the risk of very young children becoming sick after eating raw-milk cheese).

To quote from Anne Topham, a Wisconsin cheesemaker who visited France in 2004 (source: The Babcock International Institute for Dairy Research at The University of Wisconsin):

Here in the US, we have been taught to fear raw, unpasteurized milk. The French, on the other hand, revere and reassure the milk as it arrives. The milk holds the "terroir" — the specific characteristics of Place. It carries the flavors of the herbs and pasture grasses.

The milk also contains the flora, the bacteria, and is specific to the animals from each farm. Mme. Couturier, in the Loire, asked me if I had to pasteurize my milk. When I replied yes, for cheeses like hers, she quickly and definitely said, "If you have to pasteurize [sic], then the milk is dead.

Someone once asked me where my cheese begins. "In the barn," I replied — meaning it starts with the animals and not in the cheeserie. The French would say it starts outside the barn, in the pasture or "prairie" as they call it.

Of course, the ripening, the final cheese product depends on the skill of the affineur in watching over and tending the cheese after it is made. But the ripening really begins before the cheese is made. And bacteria is an inseparable part of that process.

Bureaucratic enmity for raw milk is not limited to the Feds. California has its own decades-long controversy, one side of which may be read online in "The Vendetta Against Alta Dena Dairy." But that's another story.

This story, today's story, is that the U.S. is an international Godzilla, destroying a legacy of European tradition that extends hundreds of years. So that not only will you and I never taste real cheese, but that we are economically intimidating the rest of the world as well. And the tragic irony is that, based on the hyper-hygienic fear of all bacteria, it is all a huge, power-consumed, bureaucratic myth.