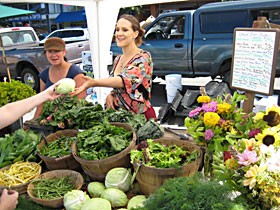 Whereas*, Humboldt County is renowned for its local dairies, grass-fed beef and fresh fruits and vegetables, and recognized as an emerging center for local family-owned farms in the United States; and*

Whereas*, family farmers are a cornerstone of our communities — trusted providers of nutritious food and stewards of our precious natural resources; and* ...

(Well, whereas too many more things to list here — basically that we locals support and have grown to count on the area's family farmers who are "enhancing the quality of life for everyone..." )

Now, Therefore Let It Be Resolved that the County Board of Supervisors proclaims September 2007 "Local Food Month" in Humboldt County, and urges all members of the community to join in a month of celebrating local agriculture and recognizing the farmers who provide our food ..."

That proclamation, "respectfully submitted" by the Community Alliance with Family Farmers, proclaimed by the Supes last week and set for reiteration this week by the Arcata City Council, sets the stage for a series of events in the coming weeks, some put on by the CAFF, some by other like-minded community groups.

Now I have to admit, I'd never heard of the CAFF before recently. I knew an organization called the Friends of the Humboldt County Farmers' Market ran a farm tour last fall (see "Talk of the Table," Oct. 5, 2006) and knew they put out the first Farm to Table calendar, but I hadn't heard that they'd thrown in their lot with a statewide advocacy group.

CAFF got its start in 1983 as the California Association of Family Farmers, running parallel to something called the California Agrarian Action Project that formed in the late '70s in Yolo County when farmworkers started losing jobs to giant industrial farms, and in particular due to the coming of the mechanical tomato harvester. (Should we mention that using a machine to pick tomatoes meant redesigning the fruit to be tougher? And never mind if it didn't taste like much.) CAAP ended up filing a lawsuit against UC Davis for using our tax dollars to profit agribusiness at the expense of small farmers. The two organizations worked together on issues including pesticide rules and water rights until 1993, when they merged to become Community Alliance with Family Farmers.

You might remember Patrick from her days running the Wildflower Café, a vegetarian restaurant she started in Northtown Arcata in 1987. She sold the restaurant in 1998 and left town, earning an MBA and bouncing around the U.S. doing food-related things before returning to Humboldt to work for CAFF earlier this year. Her first mission: implementing a Headwaters grant aimed at jumpstarting an institutional sales program. She says, "It's been fun working with these farmers, some of them people I was buying from in the '80s. Seeing where they've taken things since then, it's very impressive."

The plan is to develop connections between local farms and institutional food buyers — charter schools and the HSU food services, for example. "Humboldt State is now buying almost a third of their produce from local farmers," she noted. "They have been very receptive to the program. People are ready for this. The students are able to choose local foods, and they do."

Patrick works as a broker or, as she puts it, "a matchmaker."

"The farmers don't have time to do their own marketing; they're too busy in the fields or at the farmers' market," she explained. So her job is to determine what the college needs and make sure growers will be able to produce an adequate supply, or in the case of the half-dozen small schools she deals with, that the school will order enough to make it worthwhile. "The next step is to get them to make commitments for next year so the farmers can put in additional crops, to get beyond just selling at the Farmers' Market."

Another active project is building on a Farm to Schools program originally started under the auspices of Food for People, with funding from the California Nutrition Network. CAFF has been arranging for elementary students to visit local farms and/or the Farmers' Market. "It's all about teaching them where their food comes from, what grows here," said Patrick. "And we're starting to network with the Northcoast Environmental Center on school gardens to increase our educational outreach."

Like the state organization, the local CAFF works in concert with the North Coast Growers Association (the Farmers' Market folks) advocating for family farmers on a state and national level.

And last but not least, there's the ongoing mission to inform the general public of the importance and general coolness of local foods and family farms. That's where Local Foods Month comes in and it's a busy month.

The first event on the calendar of events is very political. Members of Democracy Unlimited lead a "food justice" workshop Saturday, Sept. 8, from 1-4 p.m., at Redwood Roots Farm in Bayside. The discussion titled, "The Revolution Will Not Be Microwaved," investigates "the power dynamics of industrial agriculture and the poisoned system that supplies most U.S. people with food. (The good news is, the solutions are delicious!)" Call DUHC at 269-0985 for further details.

The next day, Sunday, Sept. 9, sees the official release party for The NCGA/CAFF "Farm to Table 2008 Calendar," a lovely piece of work illustrated with watercolors by Alan Sanborn. That event takes place starting at 4 p.m. at Avalon Restaurant (a local foods sort of place) with a farm-fresh appetizer array supplied by Avalon, including local cheeses and produce. Entrance is $12, which includes a calendar. (The calendars retail for $12, so the party is basically free.) Beverley Wolfe of Avalon invites those still hungry after the party to stick around for a prix fixe all local dinner, the last of the restaurant's "Sunday Summer Supper" series.

A couple of Local Foods events fall into the "locavore" category — locavore being a new word coined to describe those who strive to eat food grown only in their own "foodshed." (Check out www.locavores.com or www.eatlocalchallenge.com to see what's going on elsewhere.) Foodshed is yet another new word, one that seems to have a loose definition. The local Peak Oil group (which seeks to reduce our reliance on petrochemicals) hosts its second annual 250-Mile Diet Potluck, on Wednesday, Sept. 19, at the Bayside Grange, starting at 6:30 p.m., with all dishes at least moderately local. The similar Southern Humboldt Economic Localization group follows stricter guidelines. It's throwing a 100-Mile Diet Potluck on Wednesday, Sept. 26, at 6 p.m. at the Tooby Community Park Farm in Garberville (followed by SHEL's quarterly meeting). Call 923-2636 for information about the potluck or SHEL.

The eastern part of the county gets in on the act Sunday, Sept. 23, with another Taste of Willow Creek event (from 11 a.m.-4 p.m.), once again pairing the region's growing collection of wineries with local farmers and artists and including two post-tasting dinner options. Check www.studio299.tripod.com for further details.

The grand finale of all this local food activity is the CAFF Taste of Place Gourmet Garden Dinner at Bayside's Redwood Roots Farm on Sunday, Sept. 30, from 4-8 p.m. This one is loosely modeled on a series of events called "Outstanding in the Field," hosted by Santa Cruz-based Chef Jim Denevan, who takes upscale dining right to the farm for an alfresco, family-style dinner.

CAFF is working in association with Chef Jon Hoeschen of the American Culinary Federation Chapter of the Redwoods (and WildPlatters Caf©). The menu will depend both on what's freshest and what Hoeschen and Patrick can drum up, but the plan is to include barbecued Humboldt Bay oysters on the half shell, Henry's Olives tapenade with Brio bread, a mixed greens salad from Redwood Roots with Cypress Grove chevre, and several main entr©e options: wild salmon, grass-fed beef tri-tip or grilled portabello mushrooms, with herbed polenta, fresh berries for dessert and, yes, local wines paired with the various courses.

Tickets for the Taste of Place dinner are $50 apiece or $85 a pair up until Sept. 15; $65 each or two for $100 after. Buy your tickets or pick up a list of all events above at the CAFF booth at the Saturday Farmers' Market in Arcata. Contact CAFF at 444-3255 for further details.

While they're not part of CAFF's Local Foods Month, we should mention a couple of other like-minded events this weekend: The Clarke Historical Museum has its 7th annual Salmon Barbecue on Sunday, Sept. 9, from 4-7 p.m. on the street in front to the museum (240 E St., Eureka), with wild salmon fillets (about as local as you can get) cooked on sticks in the style of the region's tribes, plus traditional Native American dancing and crafts. That's $18 a head; 443-1947 for information.

And just to make your choices more complicated, at almost exactly the same time as the salmon feast and the CAFF calendar party, there's the Slow Food dinner mentioned in this space two weeks ago running Sunday from 3-6 p.m. at Café Brio on the Arcata Plaza. Call 826-1224 or 443-2364 for ticket information.