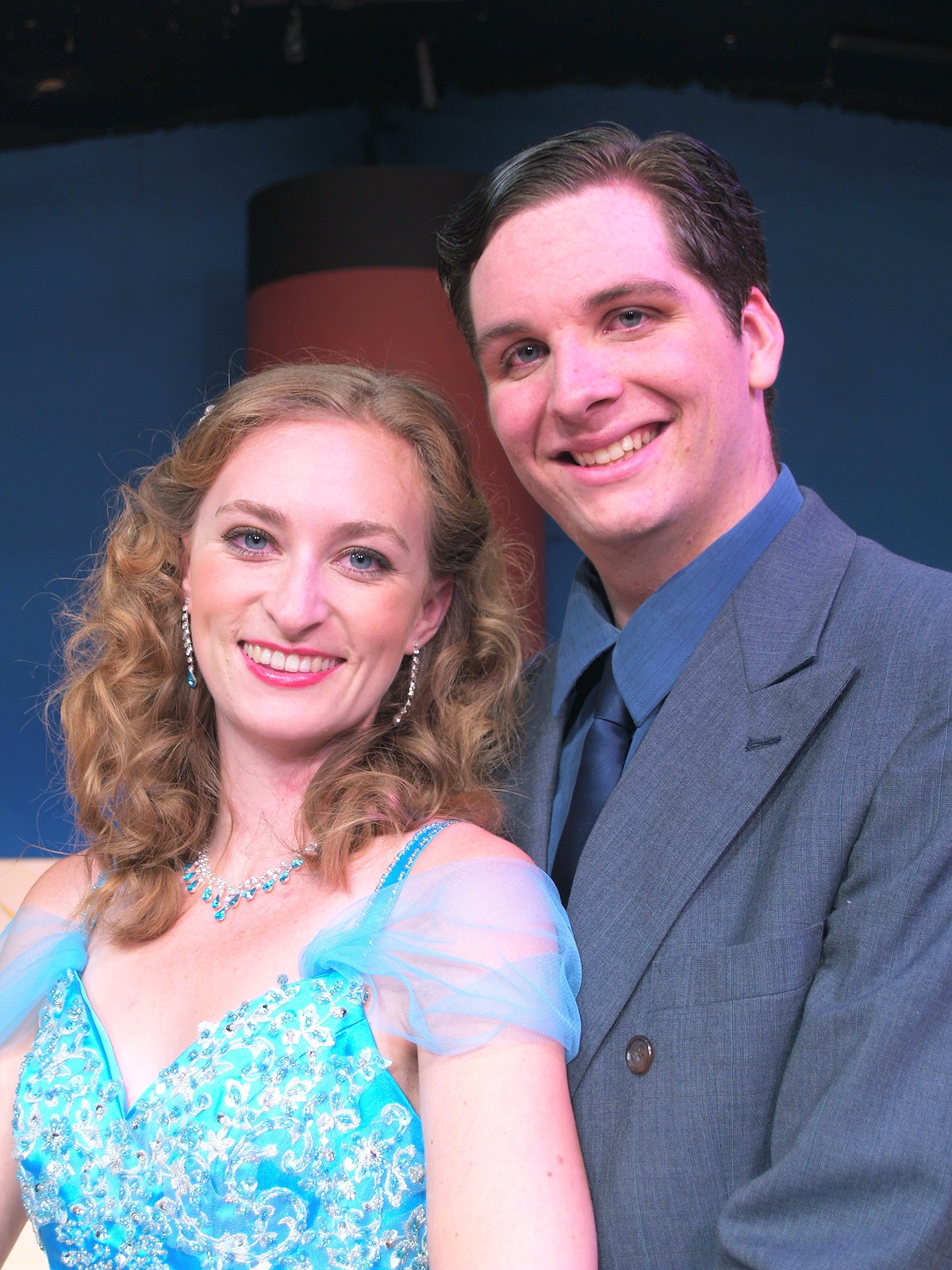 In the Cole Porter musical comedy Anything Goes, now on stage at the North Coast Repertory Theatre in Eureka, Billy Crocker (played by Erik Standifird) is in love with young socialite Hope Harcourt (Keili Simmons Marble). But he's just the young assistant to a Wall Street patrician (Howard Lang), and she is engaged to a rich Brit, Sir Evelyn Oakleigh (Clayton Cook), because her mother (Toodie SueAnn Boll) craves financial security.

They're all sailing on an ocean liner to Europe except Billy, until he helps escaping gangster Moonface Martin (David Simms), and Moonface slips him the ticket meant for Snake Eyes Johnson, an even more important gangster. So they're all on the same boat, and it's 1934 -- five years after the Wall Street crash. Maritime mayhem ensues.

Also along for the ride is nightclub singer Reno Sweeney (Molly Severdia) and her vamping companions, Virtue (Ashley Adams) and Chastity (Kelly Gordon). From the second Molly Severdia takes the stage, the production comes alive. She has that 1930s sophistication and eagerness for what comes next. She's confident as the character and as an actor, with a lively interest in every onstage moment. It's the star part -- originally written for then-26-year-old Ethel Merman -- so it helps that she also has the voice to make the show's most famous songs soar. And when they include "You're the Top," "I Get A Kick Out of You" and the title tune, you've got your money's worth right there.

But there's more. Keili Simmons Marble is incandescent as Hope Hartwell and shares that quality of being visibly alive to each stage moment. She also triumphs as the show's choreographer. There are a few well-executed large ensemble dances -- the tap-dancing "Anything Goes" would stop the show except it's at the end of the first act, when the show stops anyway. But her attention to smaller movements in smaller groups (including some Busby Berkeley reminders) also helps advance the show in the best way -- with pleasant surprises. She is an excellent dancer herself, and the few opportunities she has to move suggest what more might have been.

Anything Goes has been revised and revived several times in its 78 years, with Cole Porter songs cannibalized from other shows. The NCRT show seems based on the 1987 and 2011 versions. The music, the wit of the lyrics and the script are obvious reasons it's lasted, but there's also the script's structure and the opportunities it provides the cast. Often in such comedies, the mirth is in elaborating the stereotypical characters established at the beginning. But this show's silly, mildly satirical and mostly logical plot is also fed by a succession of small character surprises and reversals.

So Brandy Rose as the sweetly loose gang moll Erma takes it up a notch in her big song in the second act, giving ultimate expression to her character. Clayton Cook's big song (also a high point) reveals a surprising side to the established Sir Evelyn that changes the story's direction. (Brandy Rose also reveals comedic power. Anders Carlson nails his comic moments in the relatively small part of the ship's captain. Those two paired in a screwball comedy might be something to see.)

Lauren Wieland directed with wit and efficiency, and probably more. Calder Johnson designed the engagingly bright and useful set and lighting. Jenneveve Hood's costume designs are great to look at and they express the times, but most impressively, she designed to flatter each individual.

Within the limitations of community theatre and the NCRT facilities, this is a fine production of one of the best musical comedies ever. More than that, it is alive and joyous. There are many memorable moments in this show -- both from Cole Porter and from this cast.

Coming Up: Ferndale Repertory Theatre opens the popular musical Annie on the Friday after Thanksgiving (Nov.23). Directed by Kate Haley, it features Craig Benson, Andrea Zvaleko and the orphan Annies: Ariel Vergen and Marina Benson. 1-800-838-3006. www.ferndalerep.org.  Also beginning Black Friday, the Dell'Arte holiday show, The Fish in My Head, kicks off at the Carlo for two nights (7:30 p.m. start) before it hits the road. 707-668-5663, ext. 20. www.dellarte.com.