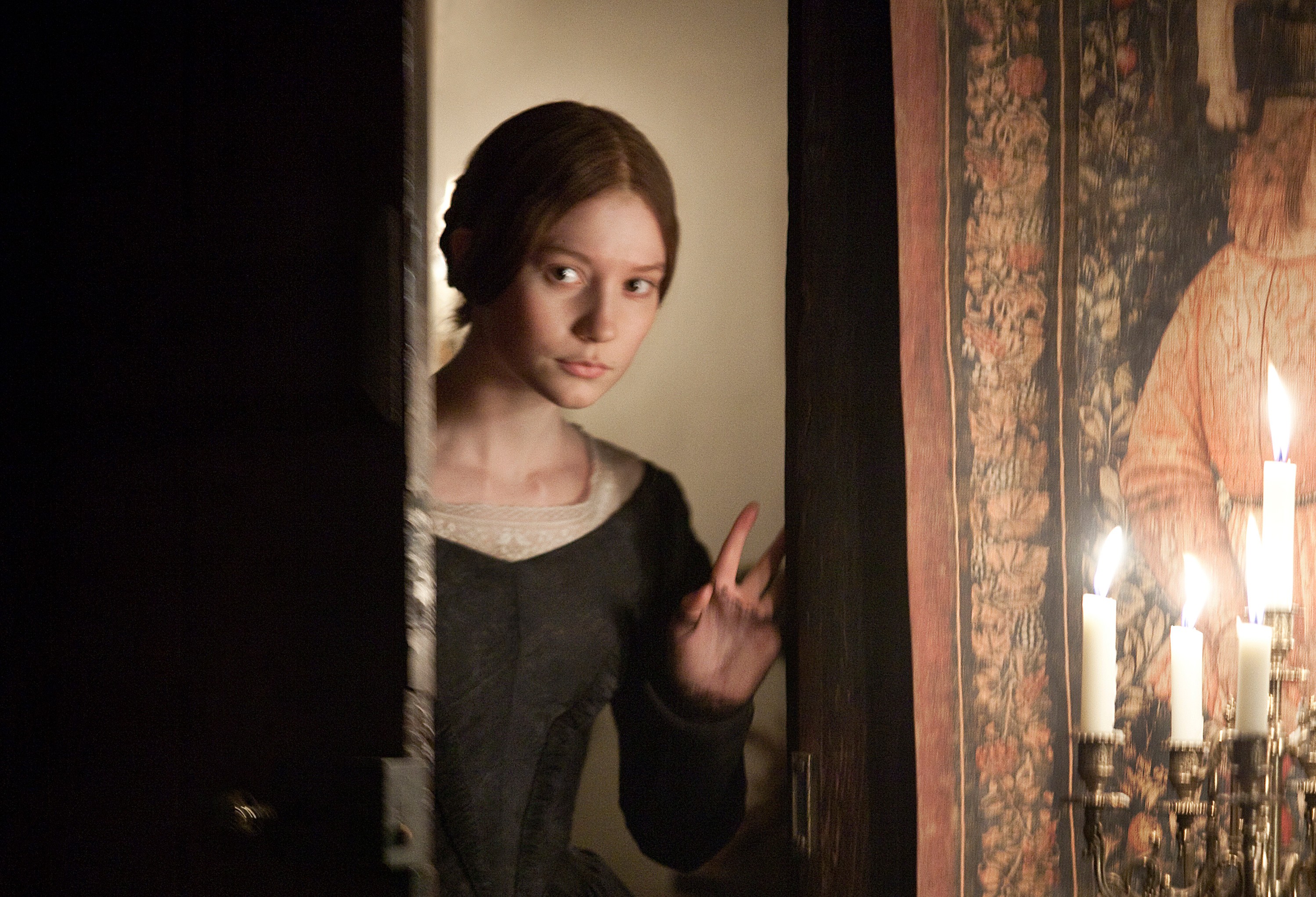 JANE EYRE. Back in college, when I first read novels by Emily and Charlotte Brontë, I thoroughly enjoyed Jane Eyre but passionately embraced Wuthering Heights, which opened my eyes to what seemed like an all-encompassing romanticism. As I've gotten older, if not more mature, the darker side of the soul now holds sway over me and Jane Eyre is closer to the sort of material I seek out.

The novel inspired the influential 1979 feminist study of the 19th century novel by Sandra Gilbert and Susan Gubar titled The Madwoman in the Attic: The Woman Writer and the Nineteenth-Century Literary Imagination. It examines the virgin/whore dichotomy of female characters in novels by women resulting from the dominant male attitude that classified women as either pure and obedient or rebellious and therefore mad.

Indeed, it is the darker aspects of the novel that this film adaptation of Jane Eyre so wonderfully captures. Screenwriter Moira Buffini expertly recreates both the spirit and substance of the novel in this filmic translation without twisting the material into something else. In particular, both the critique of the social structure and the Gothic aspects of the novel are preserved. Director Cary Fukunaga (Sin Nombre) contributes some very clean direction with appropriately beautiful, stark images from cinematographer Adriano Marianelli.

Additionally, the casting of Mia Wasikowska (Alice in Wonderland; The Kids Are All Right) as Jane is absolutely inspired, particularly for the qualities of the story that this adaptation emphasizes. Equally good is Michael Fassbinder (Inglourious Basterds; Fish Tank), who creates a lean, cynical and intellectual character with Rochester, whose secrets are revealed with great subtlety.

The story is well known. After a very bleak, Dickensian upbringing where she suffers at the hands of an aunt and a very nasty cousin and experiences oppression at a boarding school, Jane enters into the ambiguous world of Edward Rochester, who employs her as a governess. In many ways, this is a dark coming-of-age story with a Gothic twist, except that Jane always seems more mature than her chronological age.

Despite all the misfortunes she faces, she remains steadfast in her principles. In this regard, Jane is the pure version of the female character. At the same time, though, she is not an obedient woman so, in a way, she embodies some of both sides of the dichotomy noted by Gilbert and Gubar. It is in this regard that Wasikowska particularly shines, embodying both physically and verbally the complex nature that Jane possesses. I cannot imagine after this film that I will ever see any other image when I think of the character.

This is also a love story, however twisted it may seem at times. The final scene of the film, with its stark yet lovely background where Jane and Rochester finally meet again following their personal rupture and the burning of Thornfield Hall, perfectly sums up the spirit of this adaptation. At the same time, it is somehow very romantic. Even the "madwoman" is more fleshed out here than in other versions of this story that I have seen.

I am in love with Jane Eyre all over again. It's a version for people who have been around the block more than just a few times. Rated PG-13. 120m. At the Minor.

WATER FOR ELEPHANTS. Based on the popular novel by Sara Gruen, Water for Elephants is about a traveling circus in the early 1930s during some of the darkest days of the Depression. While I have not read the novel, from descriptions it strikes me as a historical coming-of-age story with a significant component of the "woman in danger" genre. What the film does best is its recreation of the era and the feel of a traveling circus with the usual complement of offbeat characters and show business atmosphere, although that whole aspect of the film seems a bit sugarcoated.

The plot is centered on Jacob (Robert Pattinson) who, on the verge of taking his final exam to become a veterinarian, gets news that both his parents have been killed. After losing their house in a foreclosure, the devastated Jacob drops out of school and hits the road where he encounters a traveling circus. Eventually hired as a vet, Jacob learns some of the facts of life, manhood and love, and the fact that some performing elephants understand Polish rather than English.

The story is told as a flashback. We initially encounter Jacob as a man in his 90s who wanders away from a nursing home to where a circus is being dismantled and tells his story to its manager, Charlie.

Besides Rosie the elephant and Jacob, the other two major characters are the show's star performer, Marlena (Reese Witherspoon), and her abusive husband August (the very good Christoph Waltz), owner of the circus. I would say the story becomes a love triangle, but there's that elephant in the room.

Even though there is little surprise in the story, this is not a bad film. But perhaps due to my antipathy toward the wooden acting of Pattison, I had trouble believing in the romance and it seemed to me that Witherspoon needed a harder edge. Perhaps the warmest performance here is that of Hal Holbrook as the older Jacob. Too bad it's so brief. Water for Elephants needs less saccharine and more substance. Rated PG-13. 122m. At the Broadway and Mill Creek.

PROM. Disney rom-com about teens getting ready for high school prom, among them Nova (Aimee Teegarden, Friday Night Lights) from the prom committee and bad boy Jesse (Thomas McDonell). 103m. Rated PG for mild language and a brief fight. Opening at the Broadway, Mill Creek and the Fortuna

HOODWINKED TOO! HOOD VS. EVIL. Sequel to the CGI-fairytale with inquisitive Red Riding Hood (voiced by Hayden Panettiere, replacing Anne Hathaway from original) joining forces with the (not bad) Wolf (Patrick Warburton) to look into the abduction of Hansel and Gretel (Bill Hader and Amy Poehler) by a wicked witch (Joan Cusack). 85m. Rated PG for some mild rude humor, language and action. Opening at the Broadway and Mill Creek in 2-D, at the Fortuna in 3-D.

ATLAS SHRUGGED. Based on right wing darling Ayn Rand's dystopian novel about a not-so-distant future where society is collapsing due to excessive government intervention. In part one of three, railroad empire heiress Dagny Taggart (Taylor Schilling) and genius inventor Hank Rearden (Grant Bowler) have a plan to fix things; it involves rebuilding a railroad. 103m. Rated PG-13 for some sexuality. Opening at the Broadway.

THE GENERAL.  Sunday May 1, at the Garberville Theater: another opportunity to see the classic Buster Keaton silent comedy, with a live soundtrack by Greg Moore and friends, and an opening set by the Garberville Town Band. Proceeds support the newly founded County Line Foundation.

THE CITY OF LOST CHILDREN. Dark surreal fairytale co-directed by Marc Caro and Jean-Pierre Jeunet (of Amélie fame) about a mad scientist who kidnaps children to steal their dreams, tracked by one over-sized big brother, One (Ron Perlman) and a clever orphan girl, Miette (Judith Vittet). Brilliant! Sunday at the Arcata Theatre Lounge.

IT'S KIND OF A FUNNY STORY. Special free screening of the 2010 comedy based on a young adult novel by author Ned Vizzini, who will be at the ATL Monday night, at the behest of the HSU student group N.A.K.E.D. For Mental Health, to talk about the film and related mental health issues. Vizzini's semi-autobiographical story concerns 16-year-old Craig Gilner (Keir Gilchrist), who checks himself into a mental hospital after contemplating suicide. Placed in an adult ward, he befriends Bobby (Zach Galifianakis), who shows him the ropes, and later another teen patient Noelle (Emma Roberts). He ultimately learns that he's not so crazy after all. Vizzini will help kick off Mental Health Month, which will be proclaimed by the Board-o-Supes Tuesday. He'll also lead a writing workshop Monday, May 2, at 3 p.m. in HSU's Great Hall, and he'll sign books and give a keynote address on "How Not To Go Crazy in College" on Tuesday (2:30 p.m.) in Goodwin Forum.

HANNA. A young girl is trained by her father as the world's greatest assassin and then travels across Europe kicking ass. Rated PG-13. 111m. At the Broadway and Mill Creek.

HOP. The Easter Bunny's son travels to Hollywood in hopes of becoming a famous drummer. No, really. Rated PG. 95m. At the Broadway, Fortuna and Mill Creek.

RIO. A domesticated Macaw named Blu believes he is the last of his kind, until he hears there may be another Macaw in Rio de Janeiro. Vacation! Rated G. 99m. At the Broadway, Fortuna and Mill Creek.

SOUL SURFER. True story of teen surfer Bethany Hamilton who lost her arm to a shark. Rated PG. 106m. At the Broadway, Mill Creek and Fortuna.