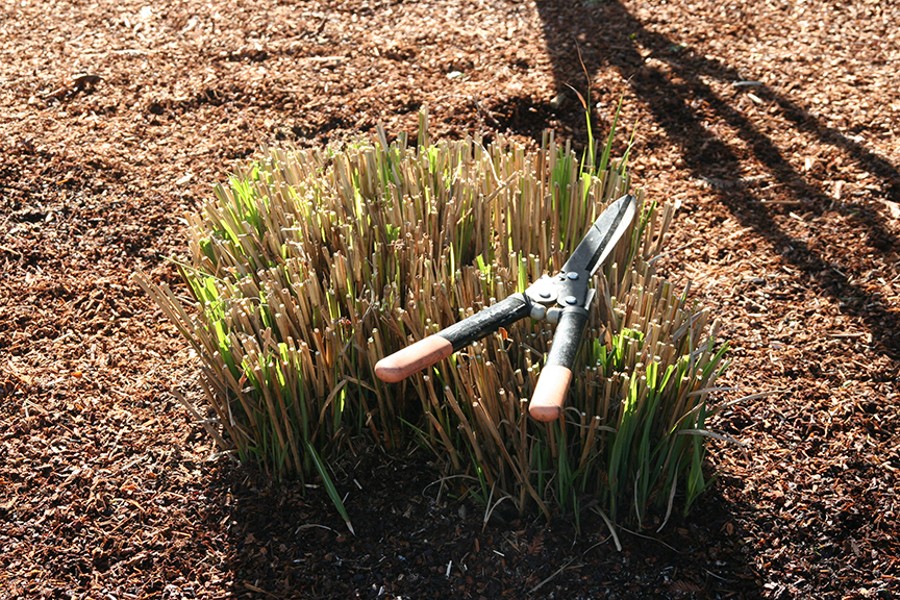 This is certainly the coldest winter I can remember since I've been in Humboldt County — so chilly that even plants I think of as being hardy are showing serious damage from frost. Though we have all of January's usual tasks (pruning, pruning and — oh yeah, pruning!), we should give our plants a little extra love through this cold spell so they'll make it through to spring. Here's what's on the agenda for January's garden.

Water your plants. I know — crazy, right? I'm sure your hose is stashed in the garage with the swimsuits and the Slip'N Slide, but it's time to dig that sucker out. We've been having an extraordinarily dry stretch, and lack of moisture can make the freezing temps all the more damaging to tender plants. While you're at it, pay special attention to anything planted under the eaves, since even if it does rain those plants will still be dry.

Don't prune frost-damaged plants. Though it's tempting to get rid of all of that yucky foliage, those shriveled leaves provide a protective layer against additional frost damage. If you can stand it, leave your plants be until late March.

Cut back dormant grasses. Though I love the winter interest ornamental grasses provide with their swaying beige stalks, at a certain point they begin to crumple and spread leafy bits all over the landscape. Once they start making a mess, use handheld or electric hedging shears to whack them to 3 to 10 inches tall, lower for small grasses and higher for the big ones. Maiden grass (Miscanthus), fountain grass (Pennisetum), Japanese forest grass (Hakonechloa) and feather reed grass (Calamagrostis) are the most common varieties which are dormant at this time of year.

Prune the old foliage off Lenten rose. There are two schools of thought for how to prune Lenten rose (Helleborus orientalis), which is just beginning to unfurl its flowers. Lenten rose sends up a number of bare flower stalks right now, then follows it up with a flush of new leaves in March. Some people appreciate the extra greenery the leaves provide through January and February, but those old leaves can also harbor pests and disease. If the leaves look damaged in any way, cut them at the base and let those bare stems emerge as the star of the show. They will look innocent and fragile, like woodland bulbs. If your leaves are perfectly healthy, you can let them go another couple of months, but do try to remove them before the new leaves come out, because otherwise it is hard to disentangle the old from the new.

Prune hybrid tea and other roses. Rose bushes benefit from pruning right now, even if they still have foliage and blooms. Though one could talk about the finer points of rose pruning for some time, the basics are pretty simple. Whack the whole thing to about 18 inches tall, and make your cuts just above buds that seem to be facing outwards, away from the center of the plant. If your rose still has leaves, you can identify those outward-facing buds because the leaf will be growing in an outward direction — cut just above where the leaf emerges. Once you've brought it down, take out any stems skinnier than a pencil and remove any dead wood (nick the side of a stem with your pruners and look for green underneath to tell whether a branch is dead or not).

Prune climbing roses. Climbing roses are even easier to prune than regular ones. Just prune two thirds of the length off of any stems that flowered (you'll see the dead flowerheads), and two thirds off of any of those wild side shoots which are sticking out from the main mass of the plant. If your Cecile Brunner rose has gotten way out of hand, you may prune it back to a framework of woody branches, but be warned: if you prune your rose to a woody framework, it probably won't flower for you again until next year.

Prune groundcover roses. If you have any landscape roses such as those in the Flower Carpet, Drift or Knockout lines, you may be despairing of how to prune the tangled mess they've become. Luckily, this is one of those places where perfection is unnecessary: use your hedging shears to cut them to about 2 feet around, then go in and remove any dark brown dead wood as well as a few of the very spindliest stems which are obviously too weak to support a cluster of flowers.

Prune fruit trees. Though the specific advice on pruning to promote better fruiting varies from tree to tree, there are a few basic rules that apply to all types of tree. Just remember the two C's and three D's of pruning: Remove branches that are Crossing or Crowded; Dead, Damaged or Diseased. Then, remove any suckers and water sprouts. Suckers come up from the base and form a thicket around the trunk, while water sprouts grow perfectly straight and upright off side branches. If you'd like a simple guide, pick up a copy of How to Prune Fruit Trees by R. Sanford Martin. This inexpensive book has line drawings and straightforward explanations which make pruning each type of fruit tree a snap.

Apply your second dormant spray. If you've had pest problems on fruit trees or roses, now's the time to apply your second dose of dormant spray. This is an organic way of preventing insect eggs and fungal spores from overwintering in the crevices of bark. Just use a dormant oil spray mixed with a copper-based fungicide and make sure you coat every surface of your tree with the mixture.

Purchase bare root fruit trees. Bare root fruit trees as well as other deciduous trees and shrubs are available now at the nursery. This year, I'm tempted by a multi-grafted cherry, a Brown Turkey fig, and a Warren pear tree (previous years' faves have included the Frost peach — the only peach that bears reliably on the coast — Honeycrisp apple and Shiro plum). Looking at local availability lists, I'm also taken with the idea of a tree-shaped version of our native flowering currant (Ribes sanguineum), and am looking forward to hearing flavor reports on the Cornelian cherry dogwood (Cornus mas), an unusual fruit which is said to perform well here.

Rake up camellia petals. If you've seen any of those old camellias in Eureka with big ruffly blooms that turn brown right away and fall off the plant, you're familiar with the effects of camellia petal blight. This fungal disease is most common in rainy climates like ours, though if this dry spell continues, perhaps we'll have a good bloom year. In any case, the fungus which causes petal blight can linger from year to year, so it's best to rake up any fallen camellia petals right away, and top dress with a layer of mulch once your camellia is done blooming.

Prune red- and yellow-twig dogwoods. These winter interest shrubs are known for having brightly colored stems in fiery colors of red, orange or yellow. However, the new stems are the flashy ones; after 3-5 years, the bark becomes a dull brown. To keep that winter fire alive, just do some selective pruning: Remove one third of the oldest branches all the way at the base. The older stems are thicker and have less color than the newer branches. This type of annual pruning stimulates plenty of vivid new growth, which keeps your shrub looking good from year to year. An added benefit of pruning? You can bring the stems indoors for a long-lasting display in a vase — the tips of the old stems will still have enough color to put on a lovely show.

Genevieve Schmidt is a landscape designer and owns a fine landscape maintenance company in Arcata. She blogs over at www.NorthCoastGardening.com.