Jason Statham Is Not Gay 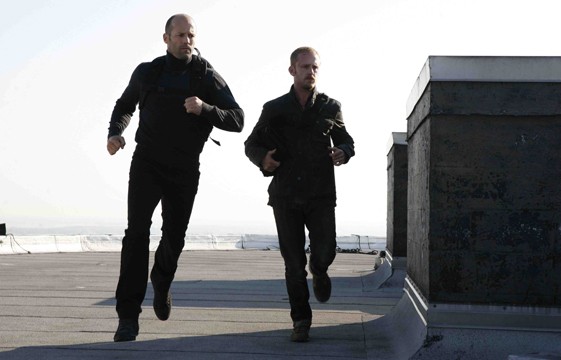 SANCTUM. A group of hot-shot spelunkers gets more than they bargained for when they explore "the mother of all caves." Inspired by the near-death experience of co-screenwriter Andrew Wight, who found himself trapped in an underwater cave. Shot in 3-D using the Fusion Camera System developed by James Cameron for Avatar. 103m. Rated R for language, some violence and disturbing images. Opening Friday in 3-D at the Broadway and the Fortuna, in 2-D at Mill Creek.

BLUE VALENTINE. Indie drama directed by Derek Cianfrance that's kind of the opposite of a rom-com: Ryan Gosling and Michelle Williams are a couple shown at various points in a troubled relationship. Williams is up for a Best Actress Oscar for her work in the film. The band Grizzly Bear supplied the score. 120m. Rated R for strong graphic sexual content, language and a beating. Opening Friday at the Minor.

First Thursday Film Night this week at Morris Graves Museum features Bhutto, a fast-moving documentary by Duane Baughman and Johnny O'Hara about Benazir Bhutto, the Pakistani prime minister who was assassinated during a political campaign in 2007.

Meanwhile, same night at the Arcata Theatre Lounge, Ocean Conservancy, Humboldt Surfrider and Humboldt Baykeeper present yet another Ocean Night. This month's enviro documentary is The Hudson Riverkeepers, looking at the three-decade-long battle to clean up of the Hudson River. Robert F. Kennedy Jr. shows up; he's the Riverkeepers' lawyer. Sports Illustrated writer Bob Boyle is another player; he founded the Hudson River Fisherman's Association and took a river clean-up lawsuit all the way to the Supreme Court, establishing an important precedent for environmental law. RFK Jr.'s dad, Sen. Robert Kennedy, is also shown talking with Walter Cronkite in The Majestic Polluted Hudson, a CBS documentary from 1965. The second feature, 180 South, is a surf/adventure doc about a journey to Patagonia. It follows Jeff Johnson and Chris Malloy as they retrace the route of a group of surfer/climbers, including Yvon Chouinard and Doug Tompkins, who traveled from SoCal to the tip of South America in 1968. Chouinard and Tompkins were inspired by that trip to start up the outdoor gear companies Patagonia and The North Face.

Friday the ATL has Kill Bill Volume 2, the bloody conclusion of writer-director Quentin Tarantino's tale of The Bride (Uma Thurman) and her quest for revenge against her former boss, Bill (David Carradine). Saturday it's auteur Wes Anderson's stylized dry comedy homage to Jacques Cousteau, The Life Aquatic with Steve Zissou, with Bill Murray as Zissou, an obsessed oceanographer out for revenge against a shark that ate someone from his crew.

Temple Beth El continues its "identity, diversity and inclusion" film series Saturday with Deborah Dickson's doc Ruthie and Connie: Every Room in the House, about a pair of working-class Jewish mothers from Brooklyn who broke new ground in the ’50s when they fell in love and moved in together, then ended up suing the New York City Board of Education to get domestic partner benefits, paving the way for the marriage equality fight that's still being fought today.

Monday at the Arcata Library, Humboldt Health Care for All presents Sick Around the World, a PBS Frontline documentary comparing health care delivery in the UK, Japan, Taiwan, Germany and Switzerland with our own dysfunctional system.

THE MECHANIC. Jason Statham films come with a sort of guarantee. His character will be a man of consummate action with a steely gaze that varies from manly determination to grim determination. Any hint of a smile would be a major violation of the pact his characters have with the target audience and any amusement purely internal, an unexpressed satisfaction that he has bested those out to thwart his goals. Killing people is simply a job that must be handled professionally and with detachment, rather like fitting a cap in a dentist's office. Just to forestall any sense of ambiguity about the character's sexuality, there is at least one scene where he has sex with a woman. Once that's out of the way, he can proceed to action with mechanical precision. And finally, of course, Statham's films always have the requisite mayhem, the true payoff that the viewer seeks.

The Mechanic, a remake of the 1972 Charles Bronson film, should not disappoint fans. In this iteration of the Statham character, he is professional assassin Arthur Bishop, clearly an occupation that pays extremely well, given his lavish digs. But things get a little dicey early on when Bishop's relationship with colleague Harry McKenna (Donald Sutherland, playing Donald Sutherland in a wheelchair) becomes a professional assignment.

The situation becomes even more complex when Bishop ends up playing a sort of father figure for Harry's son Steve, played with unsubtle surly intensity by Ben Foster (Pandorum), a relationship made more problematic for the solitary Bishop because of what Steve doesn't know about how his father died.

The film actually begins rather slowly in regard to violence: In the first hour there are only three killings and one savage beating, but the viewer should not despair as the last half of the film redeems itself.

For this viewer, it is the character of Steve McKenna that holds the most interest. I wondered, for example, about his excessive fondling of his gun barrels. But even more fascinating was the scene where he's given his first independent assignment, assassinating a rival hit man who happens to be physically imposing and gay with a weakness for a certain breed of small lap dogs and young guys. Despite explicit warnings from Bishop that Steve should kill the guy with an injection at the bar where they hook up, Steve goes home with the target and there ensues a very physical fight with a lot of body contact that ends when Steve penetrates his target's body with several implements including a screwdriver. The homoerotic aspects of the scene in regard to Steve's character are not dispelled when he has wham-bam 10-second sex in an alley with a woman, particularly when his main emotion during the act is disgust.

But, surely I'm over-reading here. After all, this is a guy action film isn't it? Oh, wait ... Rated R for strong brutal violence throughout, language, some sexual content and nudity. 92m. At the Broadway, Mill Creek and Fortuna.

THE RITE. Like Nicolas Cage, Anthony Hopkins has a tendency to perform parodies of himself in bad films, so I was prepared for some cloned version of a Hopkins character in The Rite. Happily, except perhaps for a hint of Hannibal Lecter toward the end, this does not prove to be the case here. Unhappily, The Rite still isn't a good film.

Based on the book The Rite: The Making of a Modern Exorcist by Matt Baglio, the film centers on Michael Kovak (Colin O'Donoghue, Tudors TV series) who, as the story begins, is working for his father's mortuary business. Michael is restless, though, and decides to enter a seminary. Jumping ahead four years, Michael is graduating from the seminary but has deep doubts about his faith and decides to write a letter of resignation to mentor Father Matthew (Toby Jones) rather than take his final vows. Father Matthew, however, convinces Michael to go to Rome to study exorcism, a growing practice in the Roman Catholic Church, as possession seems to be reaching epidemic proportions.

Remaining deeply skeptical, Michael is sent to head exorcism honcho Father Lucas Trevant (Hopkins) whose purpose is to convince Michael that demonic possession is real. He also befriends Angeline (Alice Braga), appropriately named, a journalist who is working on a story about exorcism and who is a skeptic as well. But his experiences with Lucas performing exorcisms just add to his doubts and he becomes convinced Lucas is a fake.

While the film has the requisite exorcism scenes, the story is actually about how Michael attains true faith and becomes a priest/exorcist himself. In fact, the exorcism scenes are tame by the standards of the genre, and the film is more interested in the path to faith than special effects. But while this theme is potentially interesting, the film often loses its way. The exorcisms seem repetitive and uninventive, causing the story to bog down much of the time.

I'm not sure who the audience for this film might be. Fans of exorcism movies are probably going to be disappointed in the relatively muted possession scenes, and the coming-to-faith aspects of the narrative are somewhat superficial and underdeveloped. While O'Donoghue is fairly solid, he doesn't find many shadings to his character. Hopkins is reliably Hopkins. In one respect, the film is similar to The Mechanic: Everyone looks very grim all the time. I guess this is how one achieves faith. Rated PG-13 for disturbing thematic material, violence, frightening images, and language including sexual references. 112m. At the Broadway, Mill Creek and Fortuna.

THE DILEMMA. Vince Vaughn sees his friend's wife with another man and wants answers. Hilarity ensues. Rated PG-13. 117m. At the Broadway.

THE FIGHTER. Mark Wahlberg and Christian Bale put aside sibling rivalry so they can train for an historic title bout. Rated R. 116m. At the Broadway.

THE GREEN HORNET. Charlie says: "It is surely the worst superhero movie ever." Rated PG-13. 119m. At the Broadway, Fortuna and Mill Creek.

THE KING'S SPEECH. Based on the true story of the Queen of England's father and his remarkable friendship with a maverick Australian speech theripist. Colin Firth can taste that Oscar. Rated R. 119m. At the Broadway, the Minor and Mill Creek.

NO STRINGS ATTACHED. Let's have sex. Rated R. 108m. At the Broadway, Fortuna and Mill Creek.

TRUE GRIT. The Dude conjures The Duke in the Coen Brother's latest outing. You decide who's Grittiest. Rated PG-13. 110m. At the Broadway, Fortuna and Mill Creek.

YOGI BEAR. Mr. Ranger is not going to like this. And neither will you. Rated PG. 83m. At the Broadway.