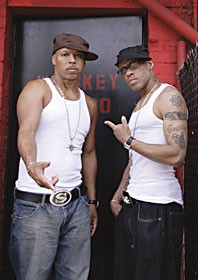 He was half of the duo Gang Starr, but the smooth rapper known as Guru was never a gangsta type, not in his style and definitely not in the socially conscious content of his lyrics. At the end of the ’80s, Gang Starr — Guru and producer/partner DJ Premier — pioneered the use of jazz samples in hip hop. When Guru went solo in 1993 with Jazzmatazz Vol. 1 , “an experimental fusion of jazz and hip hop,” he gave the new genre a name. It stuck.

Fourteen years and many albums later, he now has the word “jazzmatazz” tattooed on his arm and he’s up to Jazzmatazz Vol. 4. , a disc subtitled “Hip Hop Jazz Messenger Back to the Future.”

“Everybody knows that lyrically I’m that dude, I’m the guru of this,” says the self-possessed Guru calling from Denver, where he’s touring with his new hip hop partner in rhyme, Solar , aka “The Superproducer.” “I’m continuing my tradition but taking it to a whole ’nother level,” Guru continues. “The roots started with getting the actual jazz cats who everybody was sampling, getting them to jam on some hip hop, then bringing in world-class vocalists to create a new genre. As it has evolved it has hip hop and jazz on the face, but also encompasses elements of R&B and soul — even reggae, funk and rock ’n’ roll on the new one.”

As Guru was working on developing his jazzy subgenre, hip hop went mainstream. “What we see is that commercialism has taken over where art used to exist,” says Solar. “What you’re seeing now [in chart-topping hip hop] are not really true artists, what they are is corporate pitchmen. They’re not even there to sell records; they’re there to sell other products. Madison Avenue realized they could use hip hop music and concepts to sell products. It was only a matter of time before they corrupted the whole hip hop record industry, making it a marketing tool.”

Guru and Solar seem resigned to the fact that their 7 Grand label probably won’t produce platinum-selling CDs. “We’ll move a fraction,” says Solar, “but we’re happy with that because we’re content to be artists and not corporate pitchmen. I’ll be straight: We’re not driving Lamborghinis or Rolls Royces.”

Guru adds: “The thing I get out of it is the satisfaction of having creative control. I’m a free man now. Solar’s the CEO of 7 Grand and I’m the President. And we’re proud of the stellar cast we put together to rock with us for the album. We have jazz cats like Bob James and Ronnie Laws, up-and-comers like Slum Village and Blackalicious. We have Common, of course, and on and on.”

Also on the new disc: Damien “Jr. Gong” Marley (who is also coming to Humboldt soon for Reggae). Using Damien was Solar’s idea. “We wanted to add some reggae,” Guru notes, “Solar was like, ‘Damien is it.’”

“Me and Guru spent a lot of time in Jamaica, so it was a no-brainer,” says Solar. “I was a big fan of ‘Jamrock,’ and a huge fan of Bob Marley, and the apple didn’t fall far from the tree with Jr. Gong. I was amazed at what he came up with for us. He and his brother Stephen [ Marley ] have a great integrity to their music and their stage show. Working with them was an honor.”

Of course, they are not touring with all the stars on the record. They’re on the road with The 7 Grand Band , described by Solar as “an international ensemble of some of the best musicians on the Planet Earth at this given moment.” Guru notes: “We did almost two months with them in Europe, then went straight from Prague to Cleveland. Now we’re in Denver, then it’s on to Seattle.” And then on down the West Coast, where the Jazzmatazz tour stops Friday, July 27, for a show at Indigo Nightclub with locals Opti-Pop , Kush from Dirty Rats, the breakdancing Humboldt Rockers and DJ Itchie Fingaz.

How about four widely varying choices for a Thursday night?

Also on Thursday, a Long Beach band, Delta Nove (pronounced no-vay), offering “a world funk experience for the mind, body and soul,” at the Boiler Room. The following night they’re back home opening for Lee “Scratch” Perry at the House of Blues.

Remember a few weeks back I mentioned that the old timey murder ballad band The Pine Box Boys was about to hit the road opening for Hank Williams III and Assjack ? Turns out that tour is coming to Garberville Thursday, an all-ages thing at Southern Humboldt Community Park (off Sprowel Creek Rd.) Doors at 5 p.m. Show starts at 7 p.m. Not sure where advance tickets are sold, but they’re out there.

Thursday at the Accident Gallery, a wild-ass show with locals Trash and Roll pumping out rock from their latest, Tripped Gypsy , plus Thirty Three and 1/3, a new band from Arcata that I know nothing about, and Brooklyn drums/noise combo, Aa . Michelle Cable of Panache sent me the Aa CD/DVD package, BiG A little a , a trippy collection of rhythm jams by a band that’s sort of like a backwoods drum circle relocated to an urban setting, with crazy wailing vocalists. It might not sound like it, but trust me, they’re very cool.

DJ Nick Dean has been spinning discs at the Pearl Lounge for a while now; his run ends Friday with “ Party Like a Rockstar ,” a dress-up (“bring your stunna shades”) going-away gig shared with the mysterious Mixmaster Crushington (whose identity I figured out instantly).

The flow of musicians from Portland just won’t stop. Shelly Short, who plays Friday at Jambalaya, is from there. When I called her Monday she was barreling down I-5 towards L.A., her stand-up bass player driving. Cell phone interviews don’t always work, what with reception drop-outs, but I learned that she’s part of the up-and-coming Portland alt. folk/pop scene that includes M. Ward, The Decembrists and the like. Her album, Captain Wildhorse (rides the heart of tomorrow ), is full of dark, original songs sung in a sweet high voice. Worth checking out. Also on the bill at the Jam, Arthur Dodge , leader of an Kansas rock ’n’ roll band called The Horsefeathers, who tells us, “Yes, that’s it. A rock ‘n’ roll band ... Unless Arthur Dodge is playing without the band. Then he is just a rock n’ roll dude.” (He’s here solo.)

Across the Plaza at Mazzotti’s Friday, Ponche! does its AfroCuban salsa thing for dancers or just plain listeners.

Attending the alt. newspaper conference up in Portland, everywhere we turned someone was offering samples of Willamette Valley wine, and it wasn’t half bad. In fact, some of it’s damn good. See for yourself Saturday, July 28, at the Pearl when Geolink Wine offers a tasting of Oregon Pinots. SoHum/NoHum jazzers Humboldt Time provide the soundtrack with special guest vocalist Sophia Zidel .

Expect something completely different Sunday night at the Pearl as Night Wounds hits town with some nasty sounding neo-no wave noise on its “ I Can’t Feel My Face ” tour. Formerly based in L.A., the band now calls Portland home, as does N.W. saxophonist Ryan Carlise , a former local who was part of the infamous Daytime Minutes. The tour also includes Sacto punks Sexy Prison and Midnite Snake , a psyche-trash band out of Pittsburg, Penn.

Free reggae? Stop by the Arcata Plaza for Saturday’s Farmers’ Market, where Massagana gets irie. You can also catch them the following weekend at that big music festival on a certain bend along the Eel. More on that one next week. Peace.