And its newest American Dry Gin 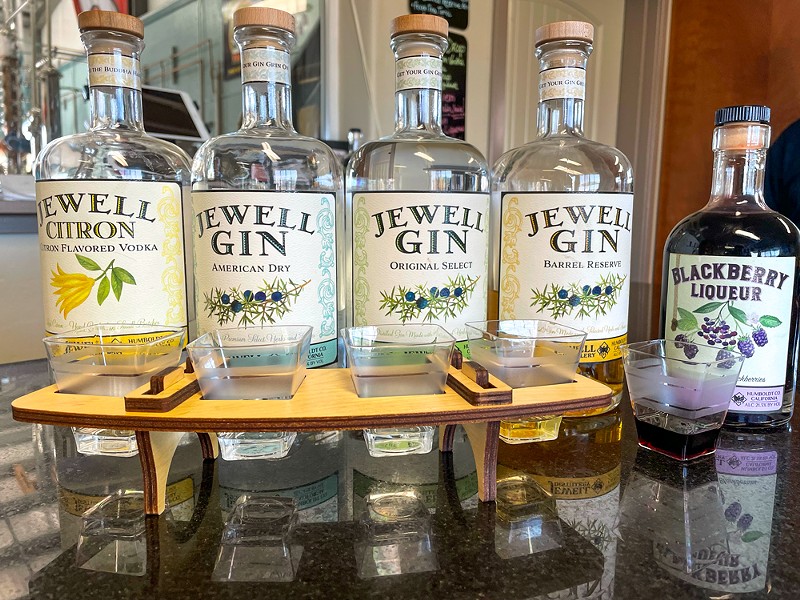 Photo by Erin Young The tasting lineup at Jewell Distillery

Here is a hill I'm willing to die on: Gin is underrated. I'm not sure what it is about this gorgeous, finessed, stand-alone booze that has folks convinced it only belongs in the roaring '20s or that they would prefer a vodka martini, but I'm here to vehemently tell you that these people are wrong.

Alcohol was born from the need to make contaminated water drinkable, resulting in the beginning of beer and then wine as far back as the Fertile Crescent during the Neolithic period. It was after this discovery that people discovered specific ingredients could provide medicinal qualities in addition to the basic hydration alcohol offered. One of those ingredients was juniper, a coniferous tree in the cypress family, which was added to wine as a medicinal ingredient in order to aid general chest ailments. From that platform, the Dutch began producing genever, (meaning "juniper berries") which was a malt wine-based beverage with a healthy amount of juniper berries to mask the otherwise revolting flavor of the old-school version of this beverage. By the 1700s, it became known as gin, the apocryphal reason being that the British were generally too drunk to pronounce the word properly and so reduced it to a drunken, English mumble that stuck in the marketing.

The spirit became a cultural staple, finding its way onto ships with the British Royal Navy whose sailors brought quinine along to help prevent malaria. That eventually became Schweppes' "Indian Tonic Water," to be mixed with their London dry gin and limes for the fruit's anti-scurvy properties. (Hence the term "limey" for English sailors. The English are really taking a beating here.)

Luckily, over the course of history, we have continued to fine-tune this wonderful beverage and it now is a deliciously elegant spirit that has been enjoyed by Queen Elizabeth II and Snoop Dogg alike. And even luckier for us, Humboldt County is blessed with some excellent local gin distillers, including Humboldt Craft Spirits and Alchemy Distillery, both of which produce many excellent spirits. And, of course, Jewell Distillery, which makes gin its primary focus.

Barbara and Michael Jewell began distilling for fun. One year, a friend of theirs who has a grove of fruit trees in Willow Creek had more fruit than they knew what to do with. They offered the surplus to the Jewells, who thought it might be fun to try their hand at distillation. The Jewells admit that first batch wasn't great, but they kept learning and ultimately, as Michael said, "did what everyone said not to do and made a hobby a business. ... We decided early on that we would just make a product that we liked," Michael said, "so if it all went belly up, at least we'd have good booze."

When I joined them at their tasting room on a ridiculously gorgeous day in Blue Lake, I got to see this business model firsthand. I was first greeted by a big, very happy German shepherd named Lo Bo, then by the Jewells, who welcomed me as though into their own home. We sat and chatted for the better part of an afternoon about their distillery, their products and life in general until it seemed we'd become fast friends. (I get the impression just about everyone would leave feeling the same way.)

Jewell Distillery celebrated its grand opening in 2017, originally producing a moonshine and a pear eau de vie, a clear, fruit liqueur. When they decided to create a gin, the Jewells wanted to make one they themselves liked to drink. With that, they carefully chose the 13 herbs, two different junipers (after tasting juniper from eight countries) and two citruses to create their Original Gin.

One of the things I find fascinating about gin is how drastically it varies between producers as well as styles, depending on the variation of the traditional spices, fruit and variety of juniper. Jewell Distillery's Original Gin is smooth and rich, with clear notes of star anise and licorice root, which they confirmed are a part of their secret spice blend, along with pomelo and mandarin zest. All these are vapor infused (a process that creates a more complex flavor profile than the more common maceration technique) and the spring water used in distillation and then to cut the final product provides a quality, clarified foundation.

After this flagship product, the Jewells went on to create a citrus vodka flavored with Buddha hand for a soft note of real citrus flavoring. There's a barrel-aged gin with beautiful flavors of vanilla, caramel and candied lemon, that's aged in rye whiskey barrels from Humboldt Craft Spirits' Redwood Rye. And they've distilled a blackberry liqueur from local berries — an eau de vie with added blackberry concentrate so it tastes like blackberry pie in a glass, no joke.

Although I fell in love with each one of these products, the star of the tasting for me was the newest release: the American Dry Gin. Also distilled and cut with the Jewell's spring water, this gin touts gorgeous aromas of lime, chamomile, rose and Szechuan peppercorns. It has a lighter mouth-feel and lower proof than the Original Gin, which makes it incredibly refreshing with its touch of citrus and slight floral and spice notes. Along with their other products, the American Dry Gin is available on restaurant back-bars, on shelves and at the tasting room. (Call ahead for availability and COVID restrictions.)

So if you don't fancy yourself a gin-drinker, I urge you to give it another shot (pun is absolutely intended). I mean, it's so versatile: gin martinis, G&Ts, gin and juice, gin fizzes, Tom Collins, Aviations, French 75s — there are so many opportunities for greatness here. Being that I am currently sipping on Jewell Distillery's new American Dry gin with just a splash of soda water and squeeze of fresh lime, I can attest this would be a great place to start.

Erin Young (she/her) is a wine educator, consultant and Wine & Spirit Education Trust student. You can find out about her classes at the Wine Cellar via her Instagram @winewithyoung.