Slow down and look around. Humboldt County is a coastal treasure trove of historic buildings and cultural landscapes. Our architecture sheds light on the history of the redwood timber industry and the people who immigrated and traveled the routes of the earliest indigenous tribes, shaping the county into what you see today.

Here are a handful of significant historic buildings — just scratching the surface, really — to tease you into exploring the other special buildings within their neighborhoods that embody local craftsmanship.

Ferndale to Blue Lake is a pretty large net to cast, yet if you have time to wander, you will no doubt find more gems than you even imagined. Maybe you'll get hooked on historic preservation.

Starting in Ferndale at one of the eloquent churches, the Old Steeple, as it's known now, was originally built as a Methodist Church in 1871 on the corner of then dirt roads Bluff and Berding streets. This was only 19 years after the Shaw family built homes at the foot of Wildcat Hill, where Ferndale would be founded.

In 1901, renovations gave the building its current look. In 1964 the Ferndale Methodist Church combined with the Methodist Church in Fortuna and the building ceased hosting weekly religious services. Though it didn't quite make it 100 years as a church, now it's the wonderful Ferndale Music Company and The Old Steeple concert venue. (Somehow the noise of music and people hasn't stopped a family of owls from nesting in the steeple.) Keep an eye out for the upcoming reinstallation of the massive restored stained glass windows and learn more about this gem at www.ferndalemusiccompany.com.

You've likely already seen the great green Carson Mansion in Eureka (and if you haven't, get over to 143 M St. immediately). So shift focus to the recent and spectacular restoration of William Carson's commercial building by the same architects, the Newsom brothers, Samuel and Joseph. Constructed to house the famous Ingomar Theater (which was closed for theatrical productions within a quarter of a century of its 1892 completion), the street-level storefronts have been restored back to original design, and two stories of offices on the Third and F streets remain original to the building. Notice the outside corner with its round turret hanging over the sidewalk. Well, this was only reconstructed in 2015, after being removed 55 years earlier. Stand and admire an amazing example of an award-winning old-growth redwood exterior restored back to its glory. The Northern California Indian Development Council, which owns the building and operates the gift shop in the corner storefront, gifted the community with this now beautiful anchor to the Historic Old Town District.

Next is not a single building, but a street lined with them, just uptown on Hillsdale Street, between C and E streets. This fabulous small street has one of the finer collections of Victorian Era and post-era jewels. Eyebrow windows, oriel bays, turned columns, fanciful over-the-top Queen Anne decorative trim, colorful paint schemes and wildly beautiful leaded and stained glass windows are some of the hundreds of details to admire. The house above puts a contemporary spin on traditional style.

Right across C Street, just toward the south, is the famous and wonderful owner-restored Historic Cottrell House (1228 C St.), another spectacular Queen Anne residence listed on the National Register of Historic Places.

As you continue heading north, pull off at Arcata's Samoa Boulevard exit, head east and around the round-about, exiting north up Union Street to the corner of Seventh Street. The Historic Phillips House (71 Seventh St.) is on the knoll overlooking Arcata and the bay. Also on the National Register of Historic Places, this is one of the oldest surviving buildings in the county, dating back to about 1854. Historic Sites Society of Arcata volunteers have preserved the atmosphere of this "typical historic farmhouse" as a living museum. Arcata's best example of Greek Revival architecture, the house displays the daily life of an Arcata resident between 1854 and 1932, with free tours available from 2 to 4 pm every Sunday. Look way down toward the ocean, along the northern shore of the bay, and you'll see giant dairy and hay barns that continue to tell the stories of agriculture a century old. Learn more at www.arcatahistory.org. 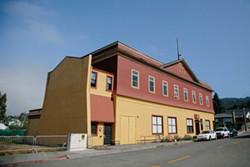 For the last hop and a skip, make your way to the sunshine capital of Humboldt, beautiful Blue Lake, located northeast of Arcata. Take State Route 299 east about 6 miles and follow the roads into the heart of the old town business district.

The huge, red Historic Odd Fellow's Hall looms large in the center of town. It replaced the original 1891 structure that was built only 20 years earlier and engulfed by the great fire that destroyed most of the commercial center of Blue Lake.

In 1974, Odd Fellows Hall became home to Dell'Arte International School of Physical Theater. It's a busy place during the year, with students from a dozen different countries coming to Blue Lake to study and perform until the following summer. There are nearly three-dozen theater shows and close to a hundred performances planned throughout the year, including during the Mad River Festival in July. Visit www.dellarte.com and the 90-Day Calendar in this issue to see what you can catch while you're in town.