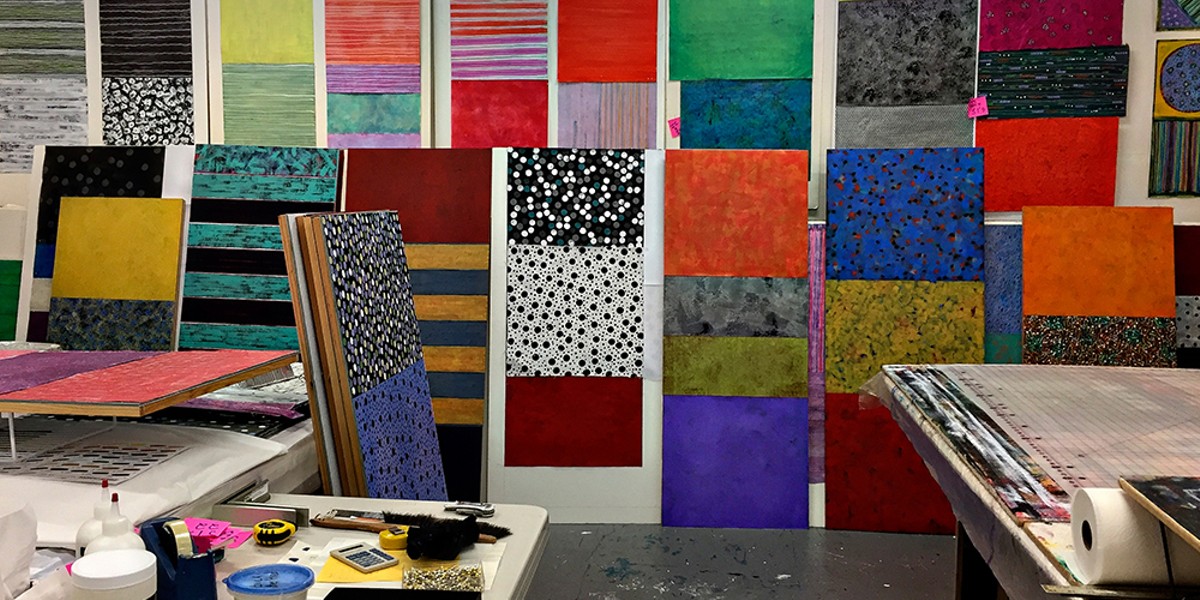 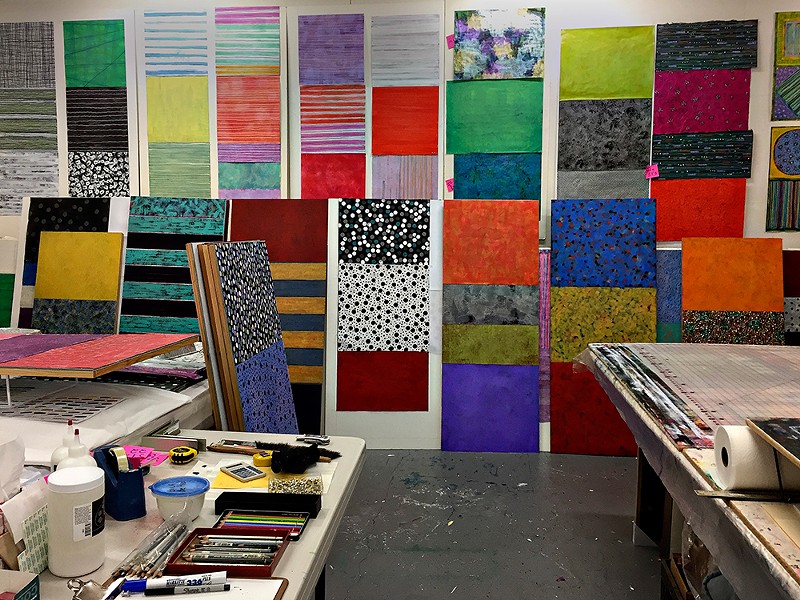 Approaching Joan Gold's installation of paintings at Black Faun Gallery is like walking into an animated conversation. The walls seem to dissolve into vibrating pattern. Fifty-eight tall, modular paintings on paper feature superimposed registers framing all-over fields of explosive, dancing pattern. Short, rounded, color-laden brushstrokes gyrate in formation like synchronized swimmers. Brushstrokes are layered, so what initially looks like a monochrome panel becomes an exercise in translucence and depth.

"They're meant to be an entire installation — meant to bounce off each other," the artist said. "I never think of them alone, although I usually sell them like that. I think of them as little families."

As families, the works strive toward balance. Each patterned surface presents the outcome of a sustained, unpremeditated creative act. "That's the first phase of the operation," Gold explained. "I paint on paper with no objective, except a feeling. Totally sensual and brainless. Pure pleasure. Then I get into the positioning and repositioning. This is the kind of thing I do for fun. I keep moving things around until they become paintings."

For some artists, abstraction becomes a language to communicate obsession; in Gold's paintings, balance and proportion rule. Much of the pleasure to be had in viewing these works — in addition to the purely retinal one caused by the dazzling play of so many patterns on the eye — is derived from the ingenious three-part compositions, which reconcile wildly different hues through adroit manipulations of value and proportion. Unexpectedly, some pairings are meltingly harmonious. Gossamer brushstrokes in lichen gray stand out against slate. Lemon yellow washes across brick red.

Gold grew up in Brooklyn and went to art school in New York in the 1950s, which she remembers as a heady time. The city was the world's art capital and the boldface names of Abstract Expressionism still drank downtown. She has spent much of her life in the semi-tropics, near the ocean, painting — first in Caracas, Venezuela, where she traveled solo as a student on a U.S. State Department fellowship and ended up living for 24 years, and later in Eureka. Her sun-drenched color often seems to reflect affinity for light and heat.

Fields of color in Gold's paintings are sometimes overlaid with a whitewash to heighten their optical value, then juxtaposed with zones of a deeply saturated complementary hue. It's a classic West Coast colorist's move, calling to mind works like Richard Diebenkorn's Bay Area landscapes, David Hockney's poolside views of Los Angeles and Jennifer Bartlett's tesserae abstractions.

"My painting is about joy," Gold said. She recalls having a "tendency toward optimism" since early childhood, when seeing photos of Holocaust victims for the first time sparked a recuperative desire to make a place where destructive impulses could get no purchase. "It's hard to put it into words. But it's a question of balance — making life right." Indeed, to contemplate these paintings as a group is to be immersed in an experience of shimmering, reverberating visual complexity, unshaded by negative vibes.

A recently awarded grant from the Pollock-Krasner Foundation will make it possible for Gold to visit the Art Institute of Chicago, the Rothko Chapel in Houston and Ellsworth Kelly's recently unveiled "temple for light" in Austin, Texas, next year. In a statement for this exhibition, the artist wrote: "I am edging towards my 85th birthday and am well aware that this is the last chapter." At the same time, she says, she's on the cusp of a breakthrough.

When she went to art school in the '50s, Gold remembered, "we were all very interested in contemporary art ... we never learned about the Old Masters." Touring the Prado in Madrid a few years back triggered a need to revisit the Baroque. "When I applied for the grant I said, 'I want to study the Old Masters.' Specifically, I want to study the dark areas of their paintings. Because I'm moving toward darker color now." The new paintings Gold is working on involve pattern fields with darker base tonalities — charcoal grays, forest greens — while the matrices of brushmarks dancing on top of them are often vivid primaries like red or blue, used at or near full saturation.

"Rembrandt and Caravaggio knew stuff we'll never know about the technical aspects of painting," she said. "But it surprised me to see them make such use of what I would consider a gimmick. They'd have light bathing a figure and they'd set the figure against a dark, dark background — I can't call it black really, because I think they mixed brown and blue to get those colors. And then they would put a warm glaze on top that makes the colors beneath it glow. But the contrast was the gimmick. It created so much drama. I saw it and I said ... I want to use that gimmick! It works and it's beautiful." An impish smile crossed the artist's face as she contemplated painting into her eighth decade. "I'm not above that. I want beautiful and I want to please myself."

Gold thinks her work will evolve in the direction of greater simplicity. "One day, now some years past, I thought, what do I want to see when I walk into my own exhibition 10 or 20 years from now? And what I saw was monochrome. A blue panel, a green panel, a gray panel. Reduction. I haven't done that yet but I am moving in that direction. Or trying to. When I have a brush in my hands, I tend to complicate things." She laughed, then turned reflective.

"The nice thing is: trying to be reductive but failing." Gold continued, "Not reaching the goal ... and yet through making that effort, the discipline or energy of the effort somehow enters the work. For me it's about painting as a part of life: a joyous quest that is continuously renewed," she mused. "I love paint. I love the process, I want the process. I want to keep working."

Joan Gold's exhibition "Gratitude" will be on view at Black Faun Gallery in Old Town Eureka between Nov. 3 and Nov. 24. An artist talk with Joan Gold will be held Nov. 10 at 4 p.m.