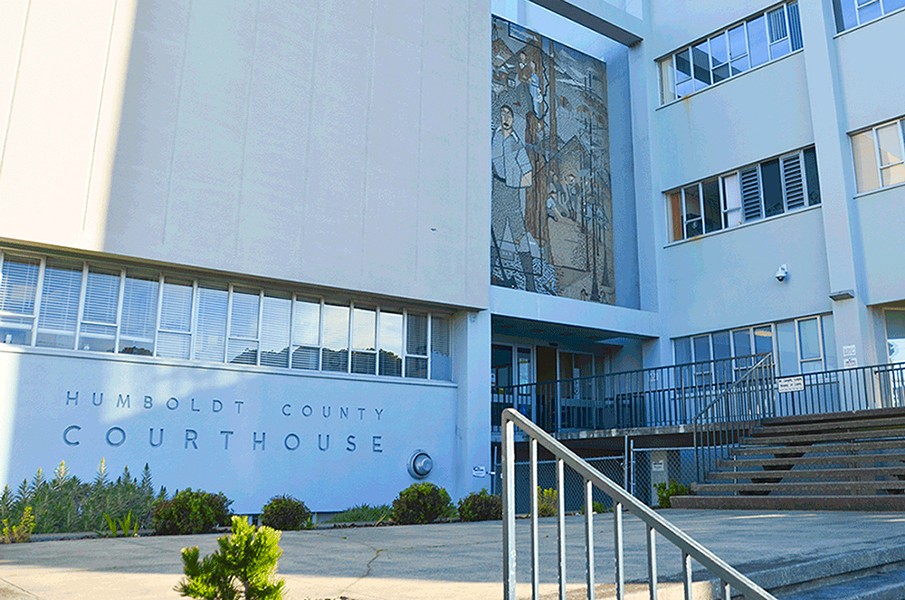 A Humboldt County Superior Court judge has issued a temporary restraining order that severely restricts Councilmember Brett Watson's access to City Hall and prohibits him from contacting or being within 100 yards of four city officials, their workplaces and vehicles, with the exception of Arcata City Council meetings.

A hearing on the order is scheduled for Nov. 4.

The action comes five months after the release of a scathing outside investigation that found Watson sexually harassed a city employee and abused his power as a councilmember.

In response, the then Arcata City Council passed a series of measures at a May 17 meeting aimed at protecting city staff while limiting Watson's access to secured portions of City Hall — which included all councilmembers relinquishing their personal key codes — and directed the city to look into obtaining a workplace violence restraining order. Watson cast the sole dissenting votes on the actions.

Watson has repeatedly denied any wrongdoing and defiantly rejected calls to step down, saying at the May 17 meeting there was "absolutely zero chance" he would resign and claiming he was a victim of harassment at the hands of city staff. He is running for reelection.

In the workplace violence restraining order filing — which is requested by an employer rather than an individual — the city states it has tried to "negotiate communication protocols" with Watson since May in an attempt to protect staff and avoid court interference but his "erratic and escalating behavior" in recent months prompted the decision to move forward.

That escalating behavior, according to the city's filing, included Watson repeatedly attempting to gain unauthorized access to locked portions of City Hall, and in at least one case using a security code belonging to a staff member and making physical contact with an employee who tried to block him from entering.

"Respondent gaining access into the secured office area despite not being issued a code for said access, being asked to leave politely, and having been prohibited from interacting with city staff regarding non-city business was alarming and frightening to the city employees who witnessed it," the filing states.

In the temporary order signed Oct. 7, Judge Timothy Canning checked the box finding there was a "credible threat of violence or stalking" but specified that Watson may continue to attend City Council meetings in person, writing that the "court is reluctant to ban an elected official from attending city council meetings without further briefings and hearing."

Watson may also communicate with the four city officials covered by the order during city council meetings "with respect to his official duties as a councilmember," Canning wrote. The judge further directed the city to "provide methods" for Watson to obtain the information he needs to fulfill his official duties.

At the Nov. 4 hearing, which occurs just four days before the election, both the city and Watson can present information and witnesses. Watson can also file a written response to the city's filing.

In the meantime, Watson is required to sell, store with a licensed gun dealer or turn over to law enforcement any firearms in his "immediate possession or control" within 24-hours of being served with the temporary restraining order.

The judge's order is the latest development in a situation that has unfolded intermittently since allegations against Watson first surfaced publicly at an Oct. 20, 2021, special Arcata City Council meeting, when his fellow councilmembers removed him from his second term as mayor and cast a vote of no confidence in his ability to serve as an elected representative, citing unspecified "alleged behaviors" that had recently come to their attention.

Watson, who did not attend that meeting, announced within days that he was entering treatment "to focus on depression and personal issues." He returned to the dais in late November.

An investigation into the allegations was launched shortly afterward, culminating in the May release of a 28-page report by Danville-based law firm Kramer Workplace Investigations, which found "a preponderance of evidence" sustained allegations that Watson engaged in "unprofessional and inappropriate conduct," and "abuse of his power as a city councilmember."

The report also included hundreds of additional pages of support documents, including emails and text messages between Watson and the employee, as well as contemporaneous notes she took to document their interactions.

According to the findings, Watson used his position to make undue demands for the individual's time and attention over the course of more than two years, repeatedly crossing over the line of a professional-subordinate relationship by talking to her about his mental health and marriage problems, and at one point sharing he had romantic feelings for her.

It also found Watson retaliated against the unnamed employee — criticizing her work and threatening to put her job performance up for review — when she deflected his romantic interest and tried to set boundaries on their interactions.

Watson was not interviewed, according to the report, despite repeated unsuccessful scheduling attempts with a succession of three attorneys who each represented him briefly over the course of two months.

He, however, has stated that he was denied due process and the investigator failed to make proper accommodation for a medical condition and his anxiety.

Watson also recently released an alternate report that he personally commissioned with Santa Rosa-based Baker Street Investigations that included interviews with character witnesses, including a former landlord and fellow Rotary member, but none of the principals involved in the Kramer investigation, including city staff and the employee. Baker Street reported finding bias with the Kramer investigation and offered a series of alternative "hypotheses" on the situation.

Pursuing a temporary restraining order was first put forward as an option at the May 17 meeting by employment attorney Thomas O'Connell, who was assigned to represent the city by its risk insurance pool in the wake of the Kramer findings.

As an elected official, Watson cannot be fired, reassigned or placed on administrative leave, as might be done in a similar situation involving an employee, which the city noted when the investigation was initiated.

At the time, O'Connell estimated the process to obtain a temporary restraining order would cost between $7,500 and $15,000. The cost of seeking a permanent order, a staff report said, depends on "numerous circumstances," including whether Watson opposes the request and whether he continues to serve on the council, but the total was estimated to fall between $40,000 to $80,000.

The city paid $15,000 to Kramer Workplace Investigations for its report.

Kimberly Wear (she/her) is the digital editor at the Journal. Reach her at (707) 442-1400, extension 323, or kim@northcoastjournal.com. Follow her on Twitter @kimberly_wear.