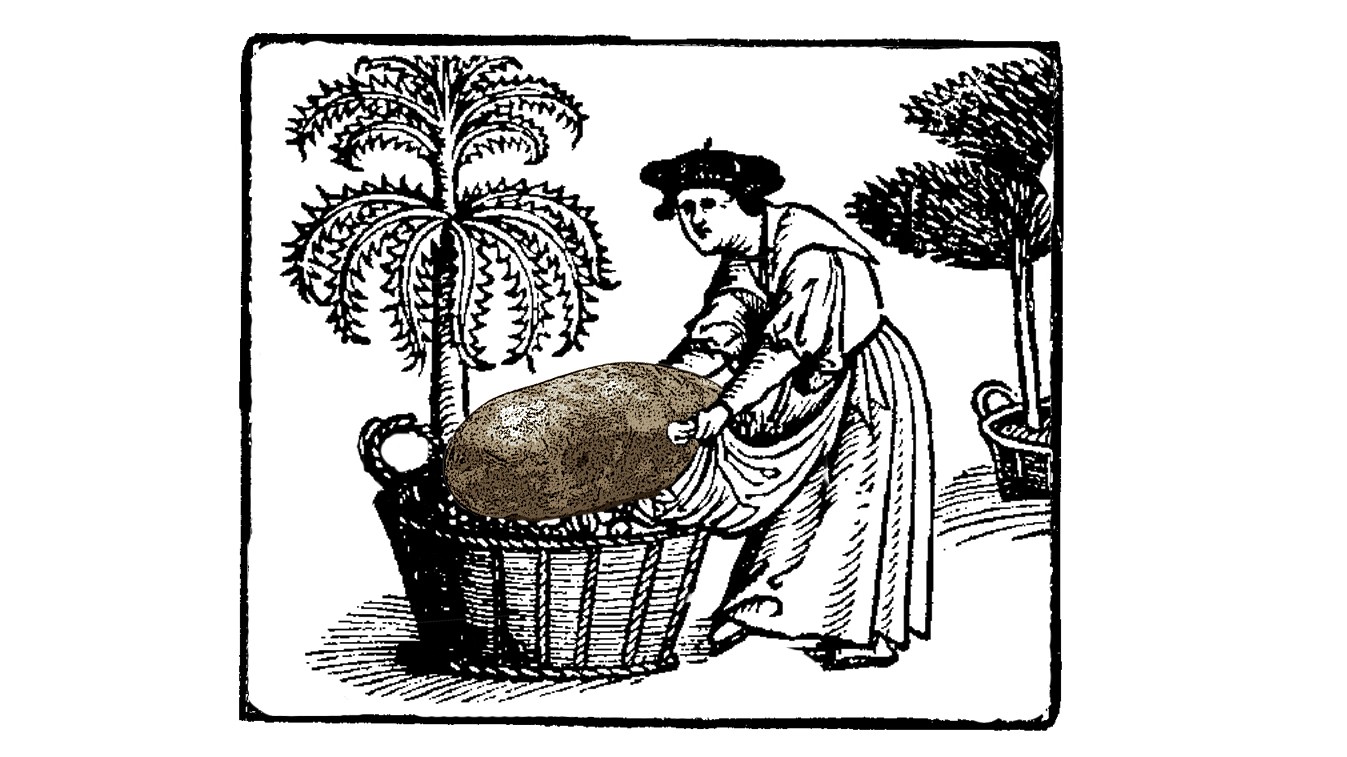 July 15: It is a new tradition among garden bloggers to photograph the garden in bloom on the 15th of every month and post the photographs online. In honor of Garden Blogger's Bloom Day, try this trick: Stand on a ladder and look down on the garden to take your photograph.

Speaking of 1951, Esquire's Handbook for Hosts offers the following menu advice for bachelor hosts: "Snipe are served whole as these tiny birds make but a single helping."

Believe it or not, July is the month to plant Brussels sprouts. Give them lots of compost and speak to them sternly regarding your expectations for Thanksgiving. And if you've never soaked a pickled Brussels sprout in a Martini -- well.

Some people believe that root crops should be planted only during the dark phase of the moon. It is not necessary to plant them in the dark, only when the moon is dark.

July 20: You absolutely must whack back your flowering plants. Be stern about it; they respond to a firm hand. Fill the house with vases of flowers in bloom or half-bloom, and toss the spent flowers and assorted other overgrowth on the compost pile. Do it now and you'll see them bounce back and bloom again in fall. A good long drink of water after you cut them back will help; a dose of kelp meal and fish emulsion is even better.

July is National Blueberry Month, as well it should be.

Canadian scientists are developing a paper strip that can be dipped in a beverage to test for pesticide residue. Imagine how much fun this will be at dinner parties.

If you buy a bunch of cilantro or parsley at the farmers' market, don't pick the leaves off one by one. Wash the bunch, take it firmly in hand, and shave off one side with a sharp knife. You'll get a nice pile of leaves with very few stems. Chop away, and put the rest of the bunch in a glass of water as if it's a bouquet of flowers.

July 22: Only one more month of Alaska/Horizon flights to Portland and Seattle remain before we must travel there by dirigible.

A dirigible is distinguished from an aerostat primarily by its steering mechanism.

Elsewhere in Esquire's Handbook for Hosts, we are advised to spray DDT generously in and around the barbecue area for our guest's comfort and peace of mind. We're also advised to keep extra cigarettes on hand, arranged decoratively in shot glasses placed around the room. Hot water is also essential, but it doesn't explain why.

Body lice are nearly blind, although this has never been a problem for them.

Dear Alaska Airlines: Couldn't the Santa Rosa flight to Portland stop off in Arcata and pick up a few people? We promise to be quick. We'll line up in an orderly fashion and hop right on board without any of the usual dithering over whether our carry-ons will fit in the micro-compartments overhead. And once aloft, we won't even bother you about the free microbrew we've come to expect on your short but friendly flights.

All right, we might like a free beer if there's time before we land. Again: we'll make it quick.

According to the authors of Five Acres and Independence, a farmer must spend part of every day going over "at least part of your premises in a leisurely, scrutinizingly, thoughtful way, and the whole of it at least once a week" in order to "reap the harvest of a quiet eye and fill the granary of your mind" with habits and characteristics of the plants animals, soil and weather common to the farm. Such contemplative daily activity is one of the small pleasures of farm life, "for it gives the thinking observer mastery over his business, brings him en rapport with his environment and in tune with The Infinite."

Those who had the foresight to plant potatoes in March are harvesting them about now.

July 30: System Administrator Appreciation Day. Think of all the days your computer didn't crash. Think of all the times your network denied admittance to a nefarious hacker. These brave men and women dive right into the tubes and tunnels that make up the interwebs, keeping them polished and well-oiled, giving not a thought to their own safety. Give them a cold Red Bull and a pat on the back.

The practice of pruning tomato suckers has gone out of vogue. The risk of introducing disease by way of the open wound is too great. Let them sprawl; if you must cut them back, slice away an entire branch at once from the main stem. Just don't pick at it.

July 31: Experts recommend digging up bearded irises, carefully cutting the rhizomes apart with a sharp, sterile knife, and replanting them at a reasonable distance from one another, but in fact, irises respond favorably to any sort of violent attack. Just grab the ones you can reach and pull. Whatever is left behind will thrive. Put the extras out on the curb and they'll be gone by morning.

Write to amystewart@northcoastjournal.com with your own observations and prognostications. Preference given to the obscure and inane.