An afternoon at the trap and skeet range 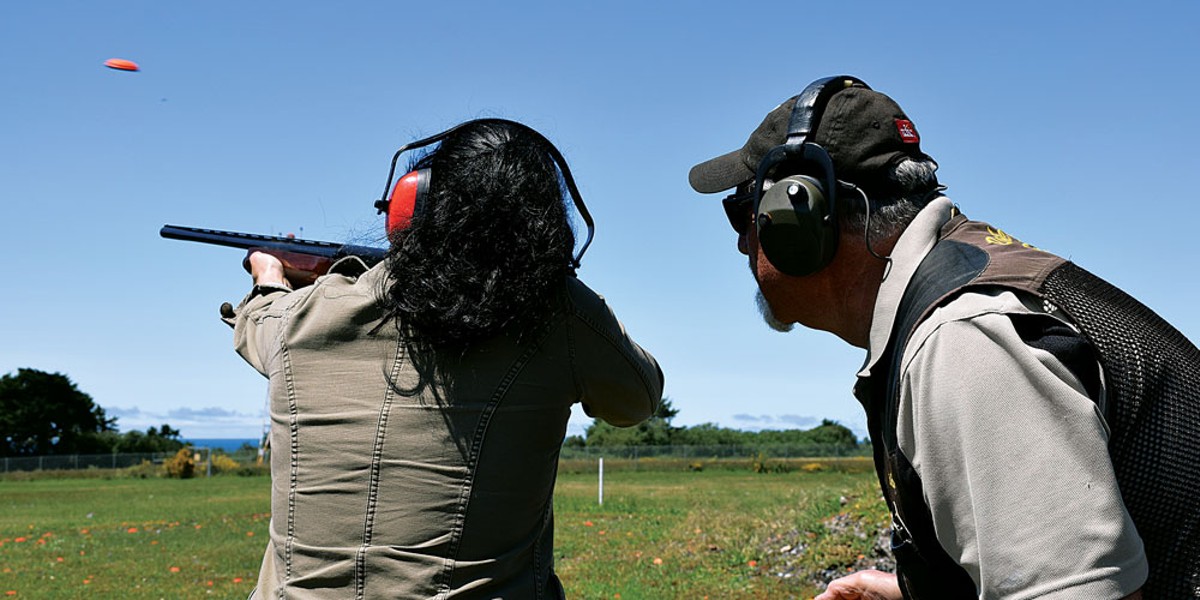 The sun is shining as I tuck my Subaru into the row of jumbo pick-up trucks inhabiting the parking lot of the Humboldt Trap and Skeet Range. A distant slice of ocean reclines beyond the airport runway, and the noisy crack of shots fired smacks against the mountains that hem McKinleyville to the coast.

Staffed by a small army of friendly volunteers, the clubhouse buzzes with small talk and the smell of a home-cooked lunch. Bill Lowe is cashier for the day, and welcomes me and my shooting partner with no-nonsense hospitality. Lowe describes the four games offered at the club: skeet, trap, bunker trap and sporting clay. He arranges an assortment of shotgun shells on the counter, explaining the differences between 12-, 20-, 28- and 410-gauge shells. Novices are welcome, and members seem happy to tutor even the most unskilled shooters.

Lowe hands us a loaner gun — a 20-gauge Browning Automatic Gold SL — along with hearing protection and an irresistible pair of magenta safety glasses. We head outside with volunteer range master Ron Ruchong (who may or may not be your dentist). A club member for 43 years, Ruchong accompanies us and is a huge help. In keeping with the club's commitment to gun safety, our lesson begins with basic gun handling and range etiquette before the fundamentals of skeet shooting — target shooting using machine-launched clay discs.

As he hands over the gun, Ruchong explains, "Shooting a shotgun is not a precise endeavor. It's not like a pistol or handgun where you're sitting and aiming at a target. It's not at all like that." He continues, "It's fluid. Like throwing a baseball. Like passing a basketball. It's more of a sweeping and pointing endeavor. The only guidance you have is instinct." I can't help but get a Karate Kid vibe.

"Pull!" I shout. Squeak! Thwack! And I miss another one.

"That's a good effort!" Ruchong maintains his positive outlook, "Don't think too much. Let's try one more." he encourages, "There's a lot of good things you're doing here. We just have to get you hitting the target." And we're laughing.

As the next neon orange biodegradable target sails across the bright blue sky, I determinedly squint along the barrel of the gun. My shoulder burns from the recoil. I think of my 7-year-old bucktoothed self, who blew it target shooting in a North Carolina Girl Scout camp in 1976.

Ruchong suggests thinking about it like this: "When you have a hose in the garden and you look at something and you spray it that's kind of what you're doing here. You just go to it and spray it. That's kind of the Zen of it."

I heft the shotgun up once more and position the weight with all of the Zen-like resolve I can muster. Holding steady, despite the adrenalin zinging through my chest, I eyeball the trajectory of the clay and, blam! I blow that sucker to smithereens. Triumphant, I begin to comprehend what all the fuss is about.

Meanwhile, a commercial airplane whirs slowly into view at the neighboring airport. Ruchong explains that even though the runway is well beyond the shot fall zone, shooters are expected to cease firing when a plane appears. There's no official communication with the airport regarding plane activity, he says. "It's just common sense."

At the end of our session, we're welcomed back into the clubhouse to an enthusiastic chorus, "How'd you do? Hope you had a little bit of fun!" To be honest, we kind of sucked at it, hitting three targets out of a possible 50. Thank goodness they're such a nice bunch of people, reminding us reassuringly, "We're more than willing to help anytime you need it."

Lowe says the nonprofit club, founded in 1952, has about 200 members, many volunteering as maintenance and ground workers, range officers, board members, cooks and cashiers.

Some members compete in national tournaments but it's mostly social. About 20 percent of the shooters are women and kids are welcome if they're not too small. "We've had some little guys who can't hardly pick up a gun. We discourage that," explains Lowe. The general consensus is that kids should be at least 10 to 12 years old. "They've gotta be big enough to handle a gun."

The club, which rests on land leased from the county of Humboldt, is open on Wednesdays and Sundays from 9 a.m. to 2:30 p.m. If the weather is truly foul, the range might be closed. On pleasant summer evenings, they're sometimes open from 5:30 p.m. to dusk, but you'll want to call first. If you're hungry, the club offers up homemade lunch (think beef stew, cornbread, salad and cake) for $5 (or $6 if it's fancy).

The cost for a shooting session is $6 for non-members and $4 for members, adding $.50 if you're playing five-stand or bunker. Safety gear and loaner guns are available without a supplemental charge, and the clubhouse sells shotgun shells. Annual family memberships (spouse and children under 18) run $35, student and associate memberships are $20. For more information, call 839-3788 or visit www.humboldttrapskeet.org.