Keep an Eye on the Sky 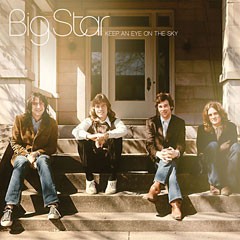 The term, “Memphis Curse,” was bantered around quite a bit amongst musician friends when I resided there for three years in the 1990s. It meant that as soon as a Memphis band reached a plateau, as a unit, it inevitably would soon fall apart, disintegrate. The story of Big Star was often used as an example. After receiving glowing praise from the rock press in 1972 for their debut, #1 Record, label problems ensued, including a lack of distribution, coupled with the band’s own internal self-destruction, fueled by alcohol, pills and a string of bad luck. Yet, Big Star was gifted in articulating their short career musically, releasing three distinct records before the band's demise in 1975. At the time all of Big Star's members were barely in their mid-20s.

Big Star was formed by four high school-aged friends/acquaintances who met through a Memphis upstart recording studio, Ardent, run by an energetic, youthful team, John Fry and Terry Manning (later including producer/musician Jim Dickinson). The two principal leaders /songwriters of the original band were Alex Chilton, whose pop hits with The Box Tops (including 1967’s “The Letter”) were achieved at the age of 15, and Chris Bell, who often used his apprenticeship at Ardent as a way to test out his own material. When bassist Andy Hummel and drummer Jody Stephens joined Chilton and Bell, Big Star, named after a Memphis-wide grocery chain, became official. In 1972, Bell had turned in a copy of #1 Record as a project for a college “Music Appreciation”-type class. However, Bell would abruptly leave the band after the record’s commercial failure.

Keep an Eye on the Sky, Rhino’s 4-CD box set, dignifies Big Star’s brief yet highly creative legacy. The band’s influences — an odd mixture of ‘60s Beach Boys/Byrds/British Invasion/Beatles-influenced pop strained through a Southern, albeit Memphis, filter — spread wide, affecting a slew of subsequent bands and singer/songwriters, igniting, initially in the 1980s, a resurgent interest and admiration of the band.

Each record, #1 Record, Radio City (1974) and 3rd/Sisters Lovers (1975), is presented in its original listing (occasionally the album mixes are replaced with alternate mixes), book-ended by demos, often vibrant and raw, made during each recording period. The fourth disc contains a high-quality 1973 live performance at Lafayette’s Music Room in Memphis, documenting Big Star, as a trio, hitting their stride as a live act.

Keep an Eye on the Sky is an intelligent, thoughtful packaging of the band’s creative process, even at its brilliantly chaotic musical end, while providing excellent alternate mixes and rare live material. Well-written and researched liner notes by music historian/author/filmmaker Robert Gordon, among others, and photographs by William Eggleston (along with other archival photos) provide a nearly exhaustive amount of material on a band whose credit, over the retrospect of time, is finally due.