Keeper of the Flame

Del McCoury, plus festival excess and music from Outside 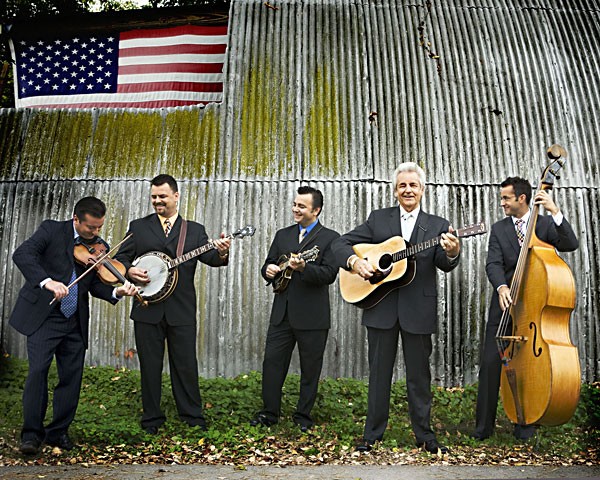 Bluegrass legend Del McCoury was at his home in Hendersonville, Tenn. "About a 15-minute drive out of downtown Nashville, out in the country," as he put it. Speaking of his life in music, he spun a long winding tale about growing up on a farm up in York County, Penn., and hearing Bill Monroe and others play regularly on radio broadcast from the Grand Ole Opry. He and his older brother eventually started a band. What kind? It's not hard to guess.

Of course today, any band with a banjo or a mandolin might be called a bluegrass band, but for McCoury it's pretty specific. "You know, I've been with this music a long time, and I worked for Bill Monroe back in ’63. I was his lead singer and guitar player -- that's a long story because before I went with him I was a banjo player ... But as to my idea of bluegrass music, well, Bill, he created it ... I think he had a certain thing in mind. I think he was looking for a sound."

Monroe found the high lonesome sound he was looking for, but it wasn't called bluegrass, at least not at first. "I think more than anything they called it 'hillbilly music,'" said McCoury. "Most of the artists that played on the Opry at that time, they called it hillbilly music. And you know, Bill Monroe didn't name his music bluegrass. Deejays and people like that characterized it that way, and by the time I went to work for him in 1963, it was well established that his music was 'bluegrass.'

"I grew up on his stuff. When he wanted me to sing with him, I believed I could do it, but I wondered if I could play with him. I'd heard his timing was really great and I worried about my own. The bands I'd been with before, their timing wasn't always that great. But it turned out that was the easiest thing, playing timing with Bill Monroe. It felt so good. And he was just playing on top of the beat, that's all he was doing."

With Monroe long gone, McCoury and his band have become keepers of the bluegrass flame. "I'll tell you, the first time I heard this music, it was banjo, fiddle, mandolin, guitar and bass. And I never changed that," said Del, "it's exactly those instruments that I have in my band. In other words I stick to the traditional sound, but at the same time, I've recorded songs that people would say are not traditional bluegrass songs. But then Bill Monroe did the same thing."

If you have even a passing interest in bluegrass, you'll want to catch the Del McCoury Band with Del's sons, Ronnie and Rob, when they come to town Sunday, Aug. 30, for the extremely eclectic Organic Planet Festival. Check our calendar section for complete O-Planet details. For more of the Del McCoury interview see the North Coast Journal Blogthing.

Sunday's OP-fest is part of a plethora of weekend music choices, including a couple of other festivals. Due to a combination of factors -- Labor Day weekend, HSU back in session, etc. -- promoters are bringing far too much music to town for our small market to absorb. As a result, one fest, the "Live on the County Line" alt. country show featuring Dwight Yoakam, was cancelled due to poor advance sales.

As noted a couple of weeks ago, the massive Outside Lands Music and Arts Festival is bringing numerous mega-acts to Golden Gate Park this weekend and some bands playing there are coming here.

The alt. whatever duo known as Ween plays Sunday at Outside Lands, but first Dean and Gene Ween hit the Eureka Theater for a Saturday show that sold out almost instantly. Are you one of the hordes of Ween fans who lagged and missed out, well, there's a single ticket on Craigslist for $100, or you can take your chance at the Ween lottery Saturday night at the Red Fox. The Steve Watts Band is playing a pre-show gig there and your $5 admission buys you a chance to win one of 10 Ween tix in a drawing.

Or you could skip Ween to go hear guitarist Doug Martsch and his indie rock band, Built to Spill. They're at OLMAF Friday night, then on Saturday they rock the parking lot below HSU's Gist Hall with San Fran's aim low kid opening. After he's done playing guitar, Martsch heads for the Jambalaya to spin some records. Bandon Taylor from The Works (aka DJ Zephyr) will warm things up with an eclectic rock mix starting around 10, then it's the local band Summers In Kuwait followed by Martsch on the turntables into the wee hours.

African reggae star Alpha Blondy was supposed to play OLMAF, and the Mateel, but he cancelled his West Coast tour. On the other hand, St. Croix reggae star Midnite plays OLMAF Friday, then hits Nocturnum Saturday with Woven Roots opening. The EastHum band is also part of the reggae-centric line-up for the first ever Humboldt Music and Arts Summit Saturday and Sunday out Willow Creek way. (More about that one in our Calendar.)

And speaking of Nocturnum, Orgone, a nine-piece neo-old school funk band out of S.F., returns Friday for another night of rump-shaking.

Elsewhere Friday, Joanne Rand and The Rhythm of the Open Hearts play Mosgo's after solo guitar sets by Todd Krider and Mike Fecete.

Add to the list of competing festivals the Sixth Annual Hops in Humboldt Saturday in Fortuna's Rohner Park with beaucoup beer plus music by five bands: UKEsperience (at noon), Kulica (1:15), Ishi Dube (2:30) and The Malone (3:45), with a closing set (starting at 5) by Moonshine Bandits, a white trash hip hop outfit from Los Baños that embraces what they call the "shiner lifestyle." (They invite fans to submit photos for "Shiner of the Month.")

The Bandits are actually in Humboldt for three days: They play Friday at Mazzotti's with Lower Class Alcoholics, Sunny Ledfurd and WTCC (White Trash Country Club). Then after Saturday's Hops gig, it's down to the Mateel for a Sunday show with outlaw country legend David Allan Coe. DAC is an unreformed reform school grad, who's been on the country music fringe for decades writing sharp, funny songs for himself and others, including the Johnny Paycheck hit, "Take this Job and Shove It."

Also at the Mateel (and Outside related), a Tuesday, Sept. 1, show by the legendary ’60s Brazilian psychedelic tropicalia band Os Mutantes. Original guitarist Sérgio Dias resurrected the band in 2006 and they've been touring the world since. One-man-jamband Scott Huckabay opens with his loopy psychedelia.

Sunday, World Famous joins forces with Deep Groove Society for a night of live electronica at the Jambalaya with Dhruva and Haj from Sub Swara.s

Between CenterArts and AS Presents the HSU campus is jumping: Sunday, guitarist Chris Isaac croons in the Van Duzer. Tuesday at the JVD it's alt. folk-rock by The Avett Brothers (fresh from OLMAF) with Sallie Ford and the Sound Outside; meanwhile, Brooklyn-based indie pop duo Matt and Kim are over in The Depot with dance pop cutie Amanda Blank opening. Then Wednesday at the Depot, American/Kenyan Afropop band Extra Golden (yet another OLAMF-er) shares a bill with ultra-cool alt. alt. band Gang Gang Dance.

Coming up next Thursday, Sept. 3, the launch of a new season by keepers-of-the-jazz-flame Redwood Jazz Alliance. They're starting big with a performance at the Arcata Theatre Lounge by eclectic New York-based trumpet player Dave Douglas and his band, Brass Ecstasy. More on that show next week.