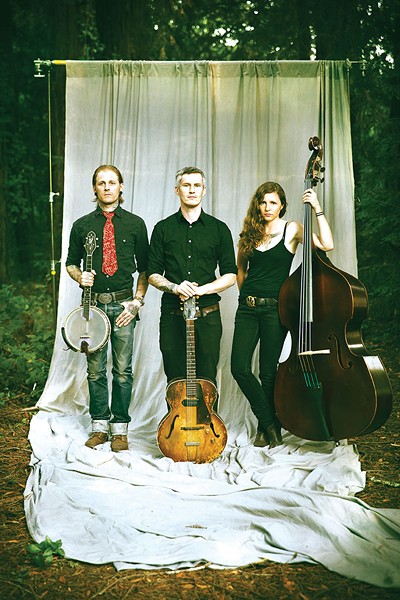 Photo courtesy of the artist The Devil Makes Three.

What separates good art from bad art? What is an underlying characteristic of art that lasts through the ages? What is it that makes a painting worthy to hang indefinitely at a museum? What is it that ensures a song will be played on the radio for decades as opposed to dying a quiet death after a few weeks? What compels a writer to begin a piece with rhetorical questions? I can't claim to have a definitive answer to any of these, but I believe a good answer to the first four would have something to do with authenticity.

There is something about being authentic, or true, or real, that we desire as humans and art lovers. Something about the artist injecting an element of their nature, or of the broader human condition into their art — if done well — warrants our constant revisiting and contemplation of said art. All art is in some way derivative of art that preceded it. We all stand on the shoulders of someone, the old saying goes, but those who create something mostly unique have a better chance of standing out in the crowd. Imitation may earn short term accolades — and isn't entirely useless — but is hardly the recipe to survive a generation.

So it was with a certain amount of delight that I read a quote from Pete Bernhard of The Devil Makes Three (DM3) fame. Guitarist Bernhard says, "The lyrical content isn't about hard-rock miners or ... the things Woody Guthrie would have written about. I don't like the idea of becoming a historical re-enactment." Although broadly categorized by some as "punkish bluegrass," the trio isn't content recycling tried and true themes of bluegrass or old-time/old-timey music. If a banjo is occasionally involved, must one sing constantly of Appalachia or moonshiners? Must a band sing about tilling the earth, jugs of contraband whiskey, or wear plaid, just because they don't have a drummer? Of course not, but you'd be forgiven for thinking this is a secret kept from many artists. Perhaps it can be argued that the creation of authentic lyrical content — and not just becoming a historical re-enactment — is what sets DM3 apart from many other "bluegrassy" trios. Head to HSU's West Gym on Sunday to find out.

The Blue Lake Casino and Hotel hosts local funk masters The Getdown. It's a free show, but pace yourself, as you can begin to get down around 9 p.m. and it won't let up until close to 1 a.m.

For some live electronic music, head over to Humboldt Brews for an album release party with The Human Experience, the brainchild of David Block. Prepare yourself for some mind expanding "prismatic" beats and rhythms. Joining this human experience will be BOA performing with Kalishakti and also on board for the night is 9 Theory. $18 cover charge for this party, and a 10 p.m. start time.

Last weekend, I had the pleasure of bumping into two members of Wild Otis at a wedding (not theirs). We discussed various bands and models of electric basses, but more importantly, their show at the Mad River Brewery. They'll be performing under the big tent at 6 p.m. and they'll be doing it for free.

You cookers, bakers and wannabe chefs know that cooking in an old kitchen can be no fun. New and updated appliances and gear can be the difference between a culinary flow or an Epicurean disaster. Okay, I don't really know what I'm talking about here, but the good folks at the Bayside Grange are holding a benefit for their Kitchen Fund. Helping them raise some monies are Kenny Ray & The Mighty Rovers, who will provide you opportunities to tap your toes to some "roots country, honky-tonk, and big band swing." Your tastebuds will be delighted when dinner is served at 6:30 p.m., with music starting an hour after that. $8 will be your contribution to the Kitchen Fund.

Redwood Curtain Brewery host the LaPatina Band at 8 p.m. The LaPatinas will dole out stories and songs that'll hit you where you most need it. Since it's a free show, feel free to leave a tip or beer for the band, just don't mention the Packers' recent elimination to frontman Jeff DeMark.

Also free are multi-generational classic rockers Doug Fir and the 2x4s who will be jamming your favorites at the Bear River Casino and Hotel.

At the famous Logger Bar in Blue Lake, local psychedelic-desert-space rockers Opossum Sun Trail will join interstellar-dirge rockers Strix Vega at 9 p.m. for a free show. (Full disclosure, SV's bass player pretends to be a keyboardist much like he pretends to be a writer.)

You'd be forgiven to think that this would be a sleepy Sunday in our neck of the woods, but it's jam-packed with options. An early show at the Lighthouse Grill in Trinidad has JD Jeffries with Jim Bowen starting around 5 p.m. for free.

As mentioned above, The Devil Makes Three will be at HSU's West Gym with Parker Millsap (a "Leo DiCaprio look-alike," from what I hear) opening. Both have opened for The Old Crow Medicine Show, so that must mean something. $25 will get HSU students into this show, for alumni and everyone else, $33 with an 8 p.m. showtime.

On the road supporting the new album Space is Still the Place, Austin indie-rockers The Bright Light Social Hour are making a stop in Arcata before heading up to Eugene. With some pop hooks, blues-rock and psychedelic weavings, expect to dance to upbeat offerings, and sway and tilt when the band stretches and spaces out at Humboldt Brews. Welcome these road warriors with $10 at 9 p.m.

Lots of new albums are being supported by touring bands up here in Humboldt, and that's a great thing. Courtney of The Lost Luvs tells me that "Seattle all-lady supergroup" Childbirth will be at The Shanty in Eureka supporting its album Women's Rights. Featuring members of Tacocat, Ponytime and Chastity Belt, Childbirth is getting some great help from "one woman mystical pop punker" Lisa Prank and aforementioned local femme fatales, The Lost Luvs. 9 p.m., cover charge TBA.

Recently I've found myself checking out videos of bass player par excellence, Jaco Pastorius. Either an influence to many bass players, or a reminder that we're not really that good on the four strings, Jaco's work with Weather Report blew a lot of minds. Some of those minds, I'm guessing, belong to Kung Fu, who mention the Report as an influence alongside the Headhunters and the Mahavishnu Orchestra. Blending that with some contemporary EDM (electronic dance music), this is guaranteed to be a funky groovin' night. Rounding out the bill are local rockers Free Rain starting off the show at 9 p.m. $15 will make you a musical witness at Humboldt Brews.

Andy Powell is a congenital music lover and hosts The Night Show on KWPT 100.3 FM weeknights at 6 p.m. He tries not to let his musical taste dictate his fashion.