As the county animal shelter fills up, some good dogs might have to be put down 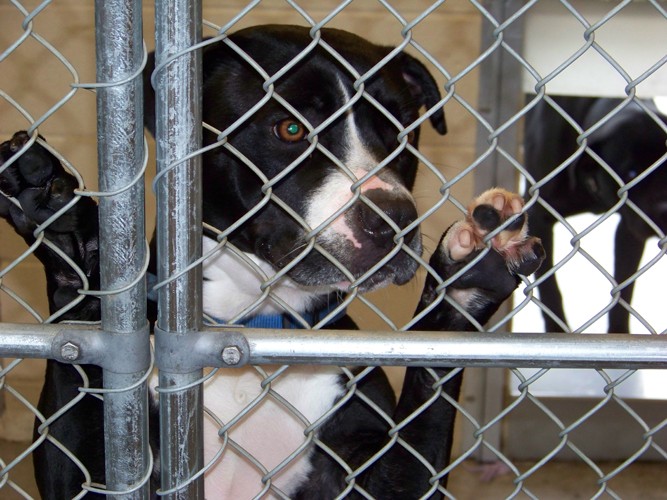 Strolling past the kennels holding adoptable dogs inside the Humboldt County Animal Shelter is an overwhelming experience. No, not the stink. It doesn't stink; they keep things shipshape here. But the beseeching, barking, eye-begging, eager-leaping, snout-pressing, pathetic cuteness of it all -- that floors you.

Here's Anna, a bluetick coonhound, boring her sad-eyed guilt into you. And Rex, her kennel mate, a German shorthaired pointer patiently waiting for his orders. Lola, a black pit bull mix, lunging upright to drape puppy-like paws against the kennel cage, tilt her head and charm you. Pink-lipped Buster, a stubby caramel-colored pit, doing the same then licking his cage for good measure. White-muzzled Daisy, a golden Lab: all woof-woof-woof-woof-lemmeouttahere. And, oh, Timber, whose cage has a sign on it that says, "Longest dog resident!," who quietly watches you go by, but, later, goes into a frenzy of high leaps inside his cage, his head almost hitting the top of it.

Makes even an asthmatic want to break down and adopt every one of them, open a dog ranch, go broke on trainers and kibbles and medical bills. And it becomes unbearable to think that any one of these best friends might have to be put to sleep simply for lack of space at the shelter.

But that could happen, soon. For the first time since it opened six years ago, the Humboldt County Animal Shelter might have to start killing off perfectly good, adoptable dogs. The kennels are full, many dogs are doubled up in the narrow spaces -- one kennel has three dogs in it -- and more dogs keep coming in. (Cats, for the record, are doing fine for space; the numbers coming in have actually dropped compared to last year.)

The shelter's program coordinator, Brent Ferguson, and his staff are doing everything they can to find more pleasant solutions to the overcrowding, such as owner reclamation, adoption or transfer to a rescue group -- measures they have employed, with great success, for years. And while, as of Nov. 30, more dogs were returned to their owners this year compared with the same time period last year, far more dogs have come in than last year. Meanwhile, adoptions are down and the many local and regional rescue groups, which facilitate adoptions or find foster homes for unwanted animals, are overwhelmed. And when you're out of space, you're out of space.

"We have an extremely low euthanasia rate," said Ferguson last Friday in his office at the county animal shelter, by the airport in McKinleyville. "On dogs, it's less than 5 percent. So, just over 95 percent of the dogs that enter this shelter every year leave here alive, which is an extraordinary number. But it's going to get worse, because our numbers are not dropping in the winter. They're actually increasing. And so, with that, our euthanasia's going to have to go up."

The county shelter is the only one designated to take in strays in Humboldt, and by law it can't refuse a stray. It has 52 dog kennels, intended to hold one dog apiece. As of this Tuesday, there were 61 dogs crammed into the kennels, 46 of them available for adoption -- that is, they had passed temperament and health tests and were good to go to a good home. (The remaining dogs were either in the dog hospital; scheduled to be taken in by a rescue group and given temperament or health rehabilitation to make them adoptable; or too sick and feeble, or too aggressive, for rehabilitation, and destined to be put to sleep).

Normally this time of year, said Ferguson, the number of dogs in custody is much lower. Fewer dogs are breeding, and dogs tend to hunker down out of the wet and cold weather so they're not roaming around as much. "In the spring, as usual, we started getting all the dogs with the puppies," he said. "And then, unfortunately, it just never slowed down."

Ferguson blames the economy, in large part. He said he's dealt with a lot of people this year who've gone through foreclosure and lost their home, and who can't take their pets with them to their new apartment. So they're just dumping them. Meanwhile, other people whose dogs have run off and been picked up by the county are finding it difficult to spring them from jail, even if they want to. It costs $45 to get your dog out if it's the first time it's been impounded in a one-year period (the fee goes up for repeat impounds). Plus there's a $35 fine if your dog isn't spayed or neutered. And there's a $14 a day boarding fee.

"And so people have to make a choice: Feed the family or get the dog out," Ferguson said.

Ferguson said if the dog kennels fill up to capacity, he'll confer with his sergeant about how to begin the euthanization. But he said he'll first push even harder to adopt out the adoptable dogs and get the rest into a rescue group. One volunteer rescue group, Redwood Rescue Pals, has placed 1,200 dogs from the shelter into foster care and often adoption in the past six years -- dogs who otherwise might have had to be euthanized. Jean Durbin, one of the group's volunteers, said they're doing their best to keep up with the dog influx.

She said Humboldt's got a serious problem, though, caused by a lot of irresponsible people. Ferguson, back at the shelter office, put out this plea:

"Keep your dogs home," he said. "Get identification on them. And spay and neuter, please. And we're also begging the public to please be kind to us. If they find an animal with identification on, give us a chance to locate the owner rather than have the dog come here. Hang onto the dog, if they can, because if the dog comes here, we're obligated by law to charge impound fees. If they pick it up from the person who found it, there's no fee. So that helps the dog owner, and it also helps us because of space."

And if you want to adopt a dog (or cat, of course), or maybe find your lost pet, the shelter's actually having its sixth annual open house this Friday from 10 a.m. to 4 p.m. Or, you can go during business hours -- they're not the most convenient, but here they are: 10-4 Monday, Wednesday and Friday; 10-7 Tuesday and Thursday. The shelter is closed Saturday, Sunday and holidays.