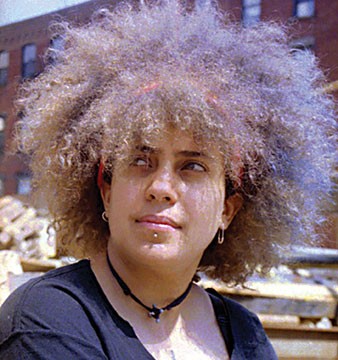 House shows often make a virtue out of necessity, providing a place for touring bands that sometimes can't find another venue, and providing a more intimate musical experience. The erasure of the segregation between audience and performer is a central tenet of the punk DIY ethic as well.

So what happens when someone who's nurtured in this collegial hothouse atmosphere blows up big? Last week, Kimya Dawson played an under-the-radar show in Arcata that proves that some successful artists actually can, in that overused phrase, keep it real. Because of the Top-10 success of the Juno soundtrack (on which her songs are prominently featured) it wouldn't be surprising if Dawson only played in bigger commercial venues. She came to Arcata to play again after playing such places as New York's Webster Hall, and appearing on TV shows like The View and Sesame Street. She's still true to her DIY roots though, and likes to play house shows.

The show was a word-of-mouth affair, and when a local radio station initially announced the show, the folks who put it on decided to put out a fake cancellation to discourage fair weather fans. Eighty tickets were actually sold on the day of the show, but you had to be in on the underground grapevine to know about it.

This worked out well, because even with a limit of 80 people, the place was jam-packed. Dawson's long-time tour mate Matty Pop Chart opened up with a spirited, if ragged, lo-fi set. He sang, played guitar and drums. His most memorable tune was a tribute to fellow one-man-band artist, cult rockabilly singer Hazel Adkins.

What came next was an unexpected treat. French band L'Orchidee D'Hawai offered an unpredictable mix of surf, Eastern European song and '60s pop. They were energetic and skilled, as virtuosic and tight as Matty Pop Chart was raw and loose. The drummer later told me he was happy to play house shows in America because when they try to do such things in France they usually get shut down by the cops, which was a surprise to me.

Kimya Dawson then came out to play with her husband Angelo Spencer, and she had the audience under her spell from the start, cracking jokes. Unlike some of the other artists on the K Records roster, Dawson's songs are sometimes childlike, but never childish. Not possessed of the greatest singing voice, her songs get across on the strength of her humor, honesty and soulfulness. She ranged from tunes from an upcoming children's record (her young son Panda was sleeping in another part of the house) to self-deprecating songs about hipsters. She sang about darker matters too. Her song "12/26," inspired by the tsunami of 2004, could just as easily be about Katrina, or any other natural disaster and government neglect — she honed in on the telling detail that made it all the more affecting.

Who knows if she'll be able to play such shows much longer, but a show like this in someone's living room is an experience that similar shows at bars, clubs or theaters will never compare to.