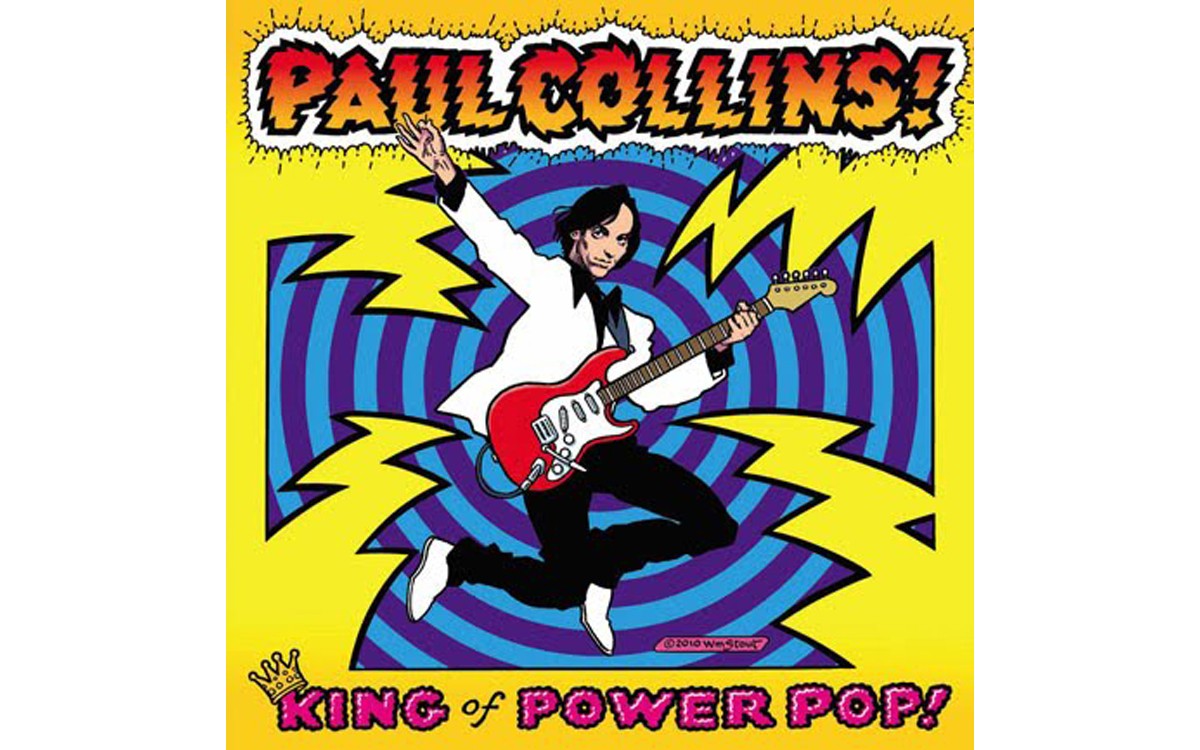 Rooted in a mixture of 1960s bubblegum, garage and UK Mersey Beat, power pop's influence casts an eccentric wide net, from The Ramones (Johnny Ramone used to describe his band's music as "sick bubblegum") to Wilco. However, by and large, the musical genre doesn't sustain longevity for a band's identity. Even The Beatles, who refined the power pop boilerplate, eventually moved away from the jangly Rickenbacher riffs and catchy melodic hooks. In spite of this, there's a continuum of power pop songs by a long string of bands and songwriters comprising a hefty legacy of tunes brimming with infectious rhythms and sing-along melodies (usually on the themes of lust, heartbreak, teenage isolation, crummy jobs, authority figures, and rock 'n' roll as salvation). Thus, the chapter on this genre, which blossomed in the ’70s, never really closes, especially with the addition of Paul Collins' new release, King of Power Pop!

After toiling on the road in the mid-’70s with San Francisco-based power pop trio The Nerves, bandmates Collins and Peter Case briefly collaborated as the appropriately-named The Breakaways. This soon led to Case fronting The Plimsouls and Collins forming The Beat (also known as Paul Collins' Beat). While The Plimsouls edged toward a more expansive, heavier sound (thanks to the unsung riffage of guitarist Eddie Munoz), The Beat maintained a stripped-down, straight-ahead approach, exemplified by their minor hit, "Rock N Roll Girl," from their 1979 debut gem. Eclipsed by the sheen and hype of The Knack, bands such as The Beat, The Plimsouls and Detroit-based The Romantics were ignored by the mainstream media, supporting themselves by touring, word-of-mouth, underground ’zines (such as Trouser Press and Bomp!) and scattered radio stations.

Collins has continued The Beat over the years with different formations, including working with young Atlanta power pop upstarts Gentleman Jesse & His Men, while also exploring Americana and alt.-country stylings on a modest number of solo releases. With assistance from Detroit musician and producer Jim Diamond, King of Power Pop! finds Collins comfortably back in form, in the thick of his power pop roots. Accompanied by Austin singer/songwriter Eric Blakely on lead guitar, Detroit stalwart Dave Shettler on drums, and Diamond on bass, Collins proves that he still has the chops, executing deft hooks with his distinctive flourish of energy. "C'mon Let's Go," a slice of Marshall Crenshaw pop pie, features Detroit punk-pop pioneer Nikki Corvette on backing vocals, while The Romantics' Wally Lamb contributes a sizzling harmonica-riff that propels "Do You Wanna Love Me?" The revival of The Nerves' "Many Roads to Follow" adds a cool Phil Spector timpani backbeat to the folk-rooted original, co-written with Case. A sterling version of The Flamin' Groovies' "You Tore Me Down" closes a satisfying pop record perfectly fitted for the waning signs of summer.