A winter wonderland worth the trip 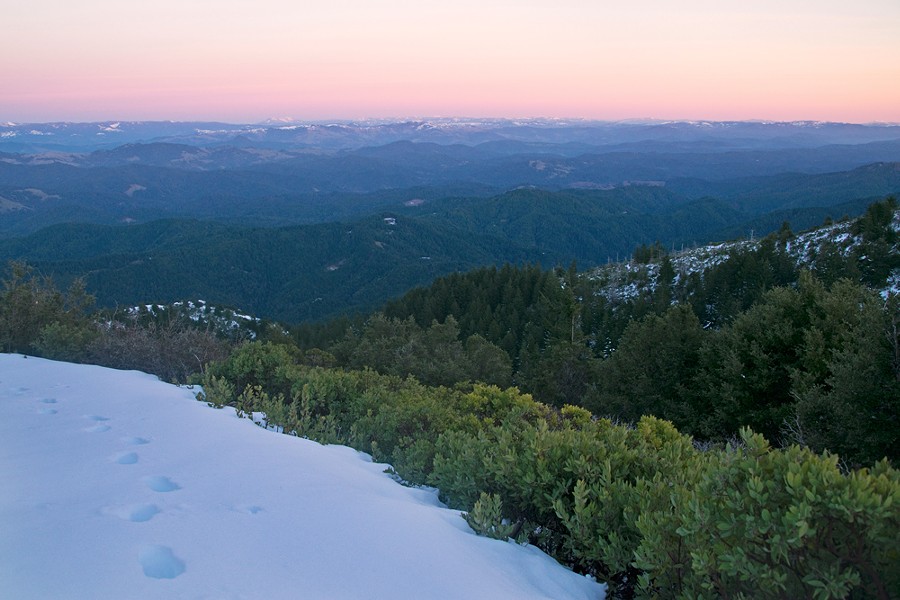 Photo by Sean Jansen Sunset views coming back down the trail on King Peak. 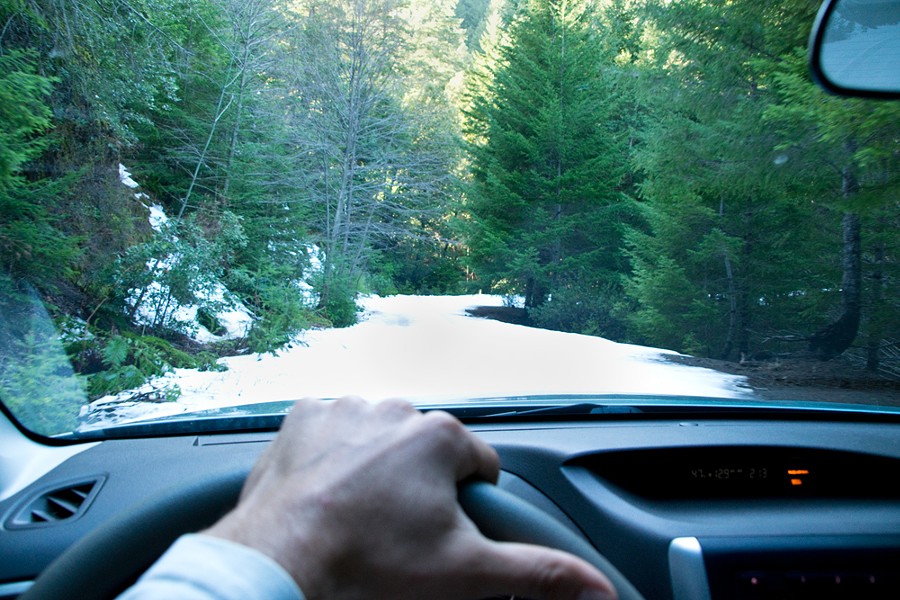 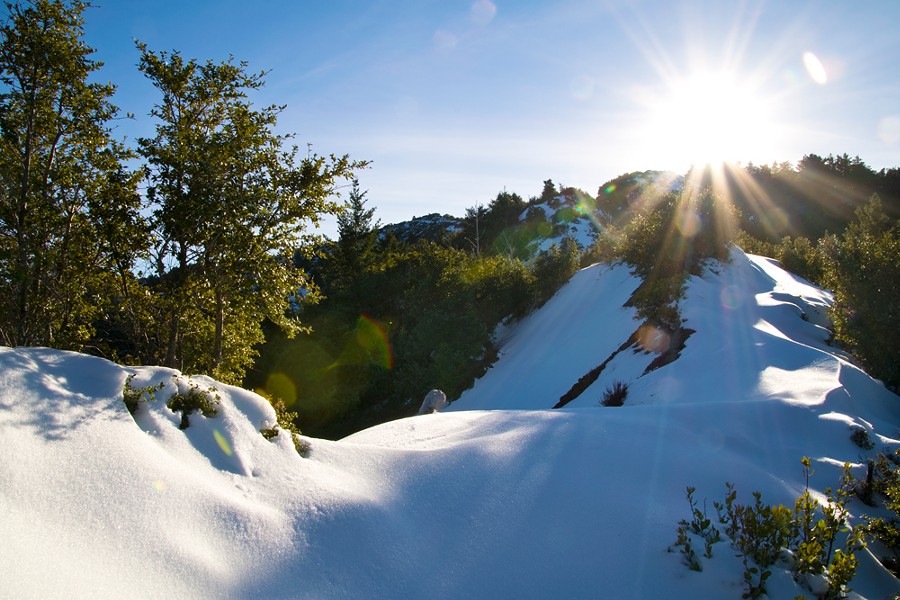 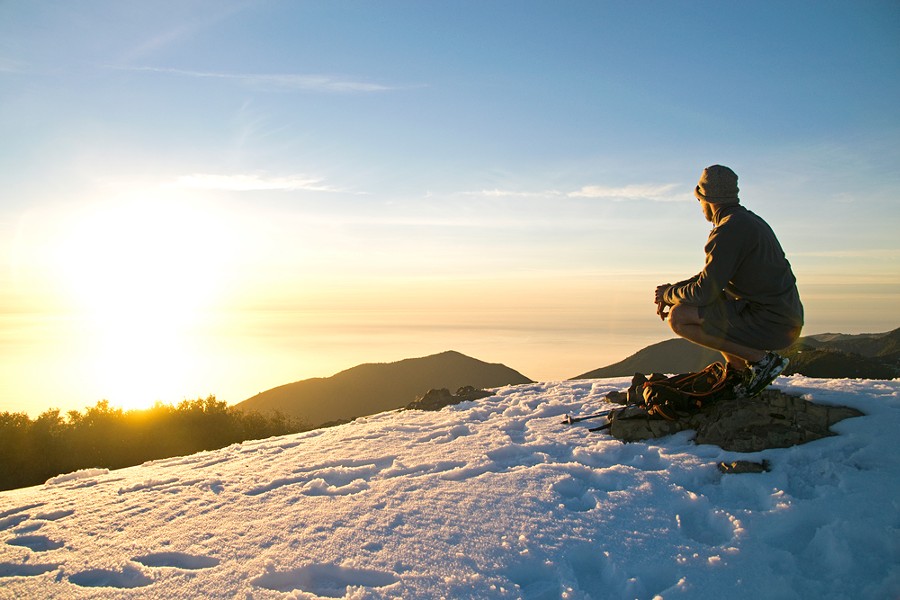 Photo by Sean Jansen Top of the mountain on King Range.

Heading south on U.S. Highway 101, I came around a bend of highway meandering along the Eel River where it slithers its way around one avenue of Redwoods after the next. After being engulfed in the tall canopy of the trees, a clearing suddenly showed fresh snow topping the mountain ridges above 3,000 feet. My goal was hiking King Peak in the Kings Range, at over 4,000 feet elevation it was looking like a real adventure.

Getting off the highway at Redway and driving toward Shelter Cove, the dirt road aptly named King Peak Road bounced its way along the spine of the Kings Range. The view was peaceful and beautiful as it twisted around ridges and trees high above the sea, affording glimpses of the majestic Pacific. Eventually, the road began to deteriorate and narrow, throwing curveballs like downed trees, deep rutted out holes and snow. Pausing to get out and survey the road up ahead, I wasn't sure of the predicament I was about to get myself into.

I pulled out the map to get a grasp of where I was. I had a little more than 2 miles to get to the trailhead but sticking to second gear with the snow getting thicker on the road and hiding each pothole I needed to avoid, doubt tempted me to turn around. But I figured I'd come this far, so I kept on, getting out of my car and surveying the road now and then to avoid getting stuck. There was no cell service and I was deep into the King's Range at this point. The only help would be from Shelter Cover or Honeydew, two sparsely populated communities several hours walk away. With the crunch of snow beneath my tires, I came around one last bend where I was greeted with a trailhead sign. Relief and excitement shot through me — I had finally arrived at the trailhead to King's Peak. Fourteen miles from the turnoff through a snow laden dirt road with washed out creeks, a downed tree and potholes that threatened to swallow my Subaru (an ill-advised vehicle choice for undertaking the King Peak Road), but I had made it within an hour or so before sunset.

From the snow on the road, it was clear nobody had been around this parking area for a bit, so I quickly dropped all clothes and changed in the cool open air. With warm layers, my shoes laced, hiker poles in hand, and a small backpack loaded with water, more layers and a snack, I took off up Lightning Trailhead for a sunset summit bid.

As quick as the King Peak Road went from dirt to snow, so did the trailhead. I began my trek by avoiding the patches of snow on my uphill jaunt to the peak. But before long, my shoes were soaked as I post-holed one snow patch after the next. Before long, the entire trail was just a several-inch layer of snow. I was certain once I got above tree line, the wind would take care of most of the snow covering the trail, but there was no way to stay dry without ski boots on. Even so, the 3-mile round-trip hike was easily done with running shoes, following the faint outline of the trail the snow was seemingly trying to hide. Before long, the summit ridge was ahead and I couldn't help but sprint my way to the top with the sun slowly descending below the Pacific horizon.

On previous summit bids, when I let out a shout at the top, I could usually hear the echo of my voice. Believe it or not, the only sounds I heard were the gentle breeze and the crashing of the waves 4,087 feet below.

I'd packed my headlamp so I could enjoy the view and colors of the sun setting completely on King Peak. There at the top, I pondered where else in the world you could be so close to the ocean yet so high up at the same time. King Peak is a remarkable feat engineered by Mother Nature that's still evolving to this day via tectonic plate shifts. It's a special place that I hope more people check out, especially during the solitude of winter.

King Peak may be a short jaunt as a bird flies from Eureka but the drive takes time and care. Head south on U.S. Highway 101 for about an hour until you reach Redway. From there head west on Briceland Road for 18 miles until you reach King Peak Road. (You will know you're there because it has a magnificent view of the ocean and the road begins to head downhill swiftly after the turn.) On the dirt road, head north for 6.7 miles. The road comes to a T intersection. To the left is Saddle Mountain Road, so stay right and you'll pass Horse Mountain Campground. From there, head another 3 miles to yet another T and this time stay left. Go another 2.4 miles and you will meet up with Saddle Mountain Road. Stay right. Then, finally, another 4.3 miles and you reach the end. Like mentioned, the road is rough and I highly recommend a vehicle with higher clearance or at least four-wheel drive. The road will dead-end at the Lightning Trailhead where the sign should be visible for you to begin your hike.

Sean Jansen is a freelance writer and photographer in Humboldt. He prefers he/him pronouns.

Get Out King's Peak Redway Hiking