Kings Starting to Show on the Klamath 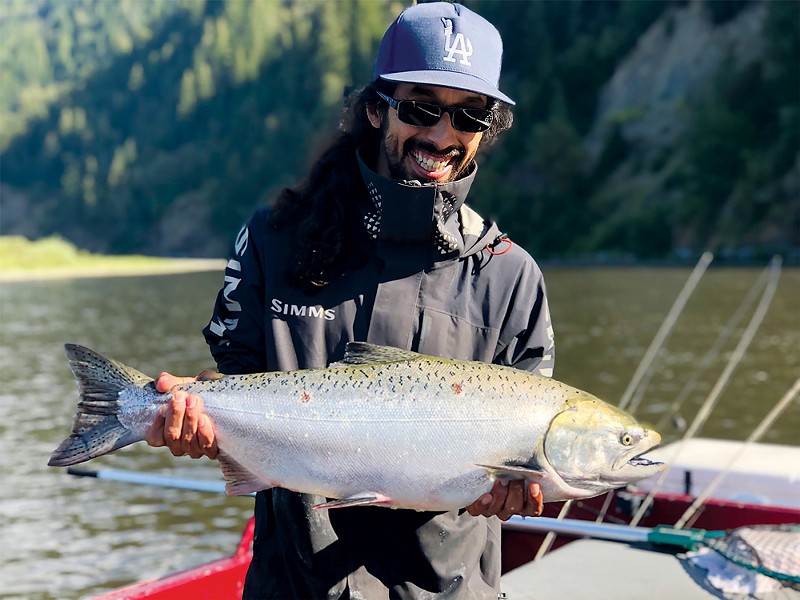 The fall-run of adult king salmon are now making their way through the lower Klamath in pretty decent numbers. Despite the water still being off-color, catch rates improved dramatically upriver of the U.S. Highway 101 bridge last week and over the weekend. Boats fishing from the Glen to Blue Creek are catching a mixed bag of adult kings, jacks and steelhead. With the water color being what it is, the boats drifting roe or soft beads are having a little tougher time while the bank anglers at the Glen tossing beads with long leaders are catching the majority of the quota to date. If the river clears, look for that trend to reverse. All the fish being caught are dime-bright and fresh out of the ocean.

According to Dan Troxel, an environmental scientist on the Klamath River Project, 226 adult salmon have been harvested from the State Route 96 bridge at Weitchpec to the Klamath mouth toward the quota of 1,060 for the week ending Aug. 26. Of those, 49 adults were caught at the spit area of the mouth. As of last Friday, 269 adults remained of the 318-adult sub-quota for the mouth.

Fall regulations for Chinook salmon fishing on the Trinity River will go into effect on Sept. 1 and run through Dec. 31, with a sport quota of 699 adults. The quota will be split almost evenly: 350 adults for the main stem Trinity downstream of the Old Lewiston Bridge to the State Route 299 West bridge at Cedar Flat, and 349 adults for the main stem Trinity downstream of the Denny Road bridge at Hawkins Bar to the confluence with the Klamath. The main stem downstream of the State Route 299 Bridge at Cedar Flat to the Denny Road Bridge in Hawkins Bar is closed to all fishing Sept. 1 through Dec. 31.

Last Friday, Aug. 26, the Bureau of Reclamation increased flows to the Trinity River as a preventative baseflow increase to improve hostile conditions in the lower Klamath River. Releases began to increase from 450 cubic feet per second and reached 1,050 later in the day. Klamath River flows will increase to 2,800 cubic feet per second at the Klamath Glen gauge and will remain at that level until approximately September 21st.

Stronger northerlies will return for the latter half of the week and into the weekend, with winds in the southern waters reaching around 20 knots by Friday. Out 10 nautical miles north of the cape, Friday's forecast is calling for north winds 5 to 10 knots and waves out of the west 5 feet at 11 seconds. Saturday is calling for north winds 5 to 10 knots and waves north 5 feet at five seconds. Sunday, winds will be out of the north 10 to 15 knots and waves northwest 5 feet at six seconds and west 3 feet at 14 seconds. These conditions can and will change by the weekend. For an up-to-date weather forecast, visit www.weather.gov/eureka or www.windy.com. You can also call the National Weather Service at 443-7062 or the office on Woodley Island at 443-6484.

The last chance of the year to fish for free arrives over the Labor Day holiday weekend. Free Fishing Day is offered by the California Department of Fish and Wildlife Saturday, Sept. 3. While no fishing license is required on free fishing days, all fishing regulations, such as bag and size limits, gear restrictions, report card requirements, fishing hours and stream closures remain in effect. Every angler must have an appropriate report card if they are fishing for steelhead or sturgeon anywhere in the state or salmon in the Smith and Klamath-Trinity river systems. For more information, visit wildlife.ca.gov/Licensing/Fishing/Free-Fishing-Days.

Sept. 5 is the last day of the recreational salmon season from the California/Oregon border to Point Arena, which includes Shelter Cove and Fort Bragg. For more information, visit the ocean salmon webpage at www.wildlife.ca.gov/oceansalmon or call the CDFW Ocean Salmon Regulations Hotline at 707-576-3429 or the National Marine Fisheries Service Ocean Salmon Regulations Hotline at 800-662-9825.

It was another epic day of albacore fishing all along the North Coast Tuesday. Boats fishing out of Fort Bragg found the fish at 30 miles and just about all of them put in over 20 big tuna. Some boats put in more, and there were also a handful of Dorado caught as well as a couple Bluefin. Those who chose to fish out of Eureka and not trailer to Crescent City also found plenty of tuna. They had to travel a little further to find the schools, roughly 45 miles, but it paid off. Scores ranged from 20 to 50 fish per boat, and all were a good grade. Several Eureka boats chose to trailer their boats to Crescent City, which really paid off. There they joined the local fleet and put a pretty good whipping on the tuna. Some boats made it only 20 miles out before they were on the fish while some chose to go a little further. Reportedly, the boats that went out 30 miles did really well with some boats pulling in close to 50 fish. Ocean conditions look like they may cooperate through Friday, so expect more of the same the next few days.

This past week was quiet out of Eureka due to rough ocean conditions, but that all changed Tuesday. Boats headed in all directions chasing rockfish, salmon and tuna. According to Tim Klassen of Reel Steel Sport Fishing, there's warm tuna water both north and south. "The water to the north is starting to break up a little, but the water to our south is looking good, and about 34 miles from the entrance. We'll have a good idea after Tuesday where the fish are. There hasn't been much effort on the salmon due to the conditions, but there were some caught last week on the 44-line." Sept. 5 is the last day of the recreational salmon season from the California/Oregon border to Point Arena.

With the tuna once again within reach, Tony Sepulveda of Shellback Sport Fishing was back on the hunt Tuesday. "We headed about 40 miles northwest of Trinidad and didn't hit warm water until just shy of the 125 line," said Sepulveda. "At about 40 miles, we found the fish fairly quickly. It wasn't wide-open, but just good enough where I felt like it would be foolish to leave. We picked away at em' steady until we called it at 2 p.m. with 32 big-grade albacore. Wednesday was more of the same for Sepulveda, except he found the fish closer. "We angled north and inside from Trinidad hoping to connect the dots between where the Eureka/Trinidad fleet fished yesterday and where the Crescent city boats did their work. Hit the break 28 miles from Trinidad and at 30 we were in 62-degree water. We were in fish immediately but mostly singles and doubles. Around 10 a.m. they came up big. Jumpers under birds and it was "you spot em, you got em" fishing capped off by a stop that saw nine hanging at once for six guys. We called it good at noon with 66, all a big grade."

"The salmon finally showed up last Tuesday," reports Jake Mitchell of Sea Hawk Sport Fishing. He said, "Fishing was pretty good all week, and the fish were a good grade. Most fish were in the 15-to-25-pound class. Since then, it's been an early morning bite and then it just shuts down. The best fishing has been right at the Coast Guard buoy. Rock fishing was pretty good last week, too, but the lingcod fishing slowed down. Tuesday was kind of slow for the Cove boats who went after tuna. Most had two to 12 fishing about 30 miles offshore. Scores were much better south near Fort Bragg."

As of Tuesday, the tuna water was sitting about 30 miles off Crescent City reports Britt Carson of Crescent City's Englund Marine. He said, "We've heard some good reports coming in Tuesday morning, sounded like the fishing was good. The rockfish bite is still excellent, but the salmon fishing hasn't been good at all. The California halibut bite remains slow."

Several boats were icing up Monday in preparation for tuna runs Tuesday and Wednesday reports Andy Martin of Brookings Fishing Charters. "The weather looks good, but the albacore appear to still be around 50 miles off of Brookings," said Martin. "Pacific halibut remains open in Oregon, and action has been good. The daily limit increases to two on Sept. 1. The rockfish limit, meanwhile, drops to four fish a day beginning Sept. 7, as Oregon is on the verge of reaching its black rockfish quota. A few early kings have been caught by anglers trolling herring and anchovies at the mouth of the Chetco."

According to Martin, the Rogue Bay is still producing big numbers of kings, with a mix of jacks and large adults. "Fish topping 30 pounds are being caught daily. Salmon fishing also has busted open on the Coos River in Coos Bay."