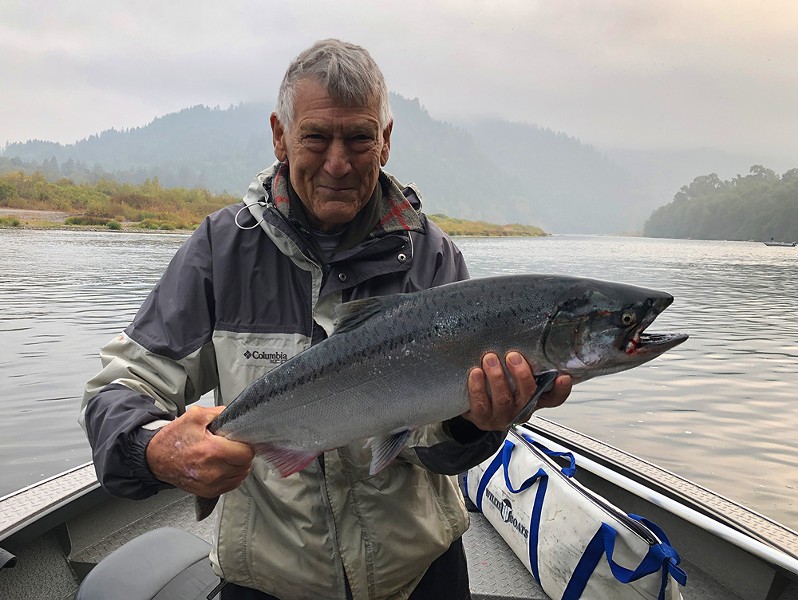 Photo courtesy of Kenny Priest Jim Zamlich of Cupertino holds a nice king salmon caught on a recent outing on the lower Klamath River. Salmon fishing on the Klamath this fall has been better than predicted and is still going strong.

Since just after Labor Day weekend, the Klamath River has been king salmon central. The river's been plugged with jacks (2-year old males), along with some hefty adults. The run started a little late this year, likely due to unusually high water temperatures. Smoke-filled skies, shielding the water from the bright sun, finally began cooling the water just enough and the salmon came pouring in. For the last three weeks, the fishing has been nothing short of spectacular. This number of fish in the river is good news, especially considering how dire the numbers of adult salmon predicted to return the last few years were. Following a complete salmon fishing closure in 2017, the Klamath and Trinity rivers have been teetering between collapse and rebuilding. In 2018, CDFW predicted 59,733 would return but only 31,838 adult fall-run salmon made it back. In 2019, a return of approximately 87,000 was predicted. Those predictions never materialized, and only 37,270 fall-run kings returned. The CDFW forecasted a modest 48,274 natural area spawning salmon would return this fall. In an average year, the Klamath basin would see close to 122,000 adult kings return.

So while it's easy to speculate this year's returns will be above forecasted numbers due to increased harvest rates, it's way too early to celebrate. We won't know the size of the run until sometime early next year but it sure feels good to see the river full of fish again. And the CDFW creel surveys are providing some solid proof. For the week ending Sept. 23, 1,162 jacks were harvested and another 656 were released. During the same week, 1,319 adult kings (larger than 23 inches) were released. The lower Klamath adult salmon quota was met Sept. 14, which is why the adults have to be released. You can still keep two jacks per angler. Anglers may still fish for adult Chinook salmon in other sections of the Klamath Basin, including the main stem of the Klamath River above Weitchpec and the entire Trinity River until their quotas are met. Keep track of the Klamath and Trinity river quotas by calling (800) 564-6479.

3) Establish an individual trap limit of 10 traps. The current 60-trap limit for commercial passenger fishing vessels targeting Dungeness crab will apply to those targeting any crab. The proposed regulation would allow an individual to service up to 10 additional traps if they possess written permission from the operator(s) of the additional traps.

4) Provide authority for the director of the CDFW to delay the fishery opener or close the season early in ocean waters of the state when the concentrations of humpback, blue whales or Pacific leatherback sea turtles exceed thresholds.

5) CCR would establish a program requiring those individuals who fish for crabs with recreational crab traps to purchase an annual validation for $2.25. 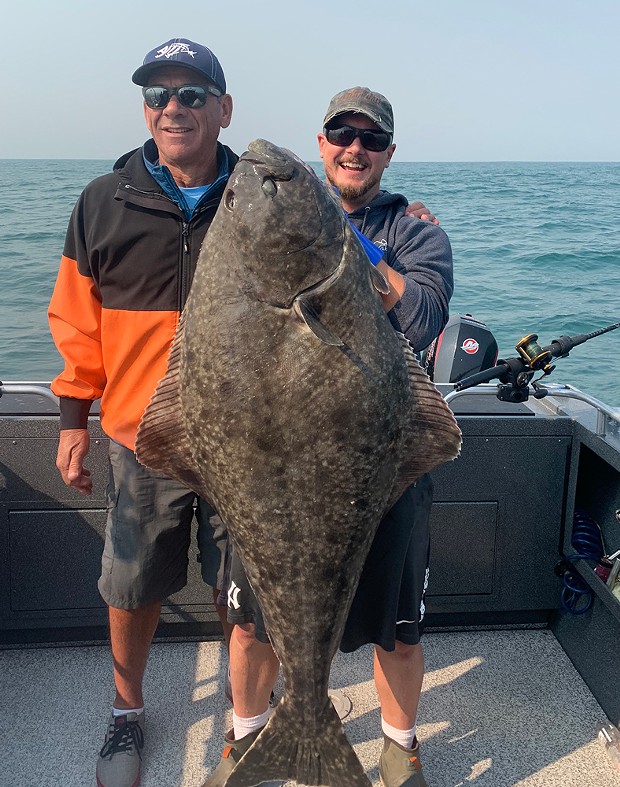 Boats were finally able to get offshore on Tuesday following last week's big swells. But things didn't go quite as planned according to Tim Klassen of Reel Steel Sport Fishing. "We ran south to the Cape based on a calm forecast," said Klassen. "When we got down there, the south wind was blowing 20 knots, which made it extremely uncomfortable. We fished for a little more than an hour before we called it. The fish weren't really in a biting mood either, but we managed to put a few on board. The forecast for Wednesday looks to be much better. The California halibut bite in the bay is still going and it seems like there's enough fish around to make a day of it. The anchovies have moved out but there's some perch and smelt around. The tides are favorable this week, which really helps. We bounced around to a few different spots on Monday and got a couple in each. We didn't find any large concentrations of fish but I'm sure they are there."

The warm tuna water is about 35 miles from the entrance, and there are a few boats that are going to take a look on Wednesday.

"We tried tuna one day last week and got blanked," said Jake Mitchell of Sea Hawk Sport Fishing. "The water and conditions were perfect, but the fish just didn't seem to be there. Between the dozen boats that ran from the Cove, there were only seven fish landed. The warm water is still there, sitting about 15 miles offshore. We did a couple of rockfish trips and it was decent. We got limits, but we really had to work for them. I mainly fished the Old Man. I didn't hear of anybody trying for salmon this week."

Halibut, albacore, lingcod, rockfish and crab are providing the best variety of the season out of Brookings right now according to Andy Martin of Brookings Fishing Charters. "Through last week, around 1,200 pounds remains on the Pacific halibut quota for Brookings and Gold Beach," said Martin. "Fish are consistently being caught in 200 to 250 feet of water straight out of the harbor. They are averaging 20 pounds, with fish close to 100 pounds. Lingcod fishing also is good as bigger fish move into shallow water."

North Coast rivers that are regulated by low flow closures, including the Eel, Mad, Mattole, Redwood Creek, Smith and Van Duzen rivers will begin angling restrictions Oct. 1 through Jan. 31, except for the Mad River, which went into effect Sept. 1. The Department of Fish and Game will make the information available to the public by a telephone recorded message updated, as necessary, no later than 1 p.m. each Monday, Wednesday and Friday as to whether any stream will be closed to fishing. The rivers can be opened up at any time. The low flow closure hotline for North Coast rivers is (707) 822-3164. NOTE: The main stem Eel from the South Fork to Cape Horn Dam and the Mattole River will be closed until Jan. 1, 2021

The main stem Eel River from the paved junction of Fulmor Road with the Eel River to the South Fork Eel River. Minimum flow: 350 cfs at the gauging station near Scotia.

Mattole River: The main stem of the Mattole River from the mouth to Honeydew Creek. Minimum flow: 320 cfs at the gauging station at Petrolia.

Redwood Creek: The main stem of Redwood Creek from the mouth to its confluence with Bond Creek. Minimum flow: 300 cfs at the gauging station near the U.S. Highway 101 bridge.

New regulations go into effect on the Chetco River starting Oct. 1 for Chinook salmon fishing. Anglers can only keep one adult Chinook salmon daily, whether hatchery or wild. Fishermen may not continue angling and must "rack their rod" after keeping an adult Chinook on any day during the period between Oct. 1 and Dec. 31. The limit is two adult wild Chinook salmon total during the period between Oct. 1 and Dec. 31. Fishermen can keep five jack salmon per day, wild or hatchery, unless they have kept an adult Chinook, in which case they must rack their rod. Angling is closed upstream of River Mile 2.2 until the arrival of fall rains and increased river flows.

Fishing got a little tougher this past week as the mouth has reportedly been sanding over. Boats are still catching several fish per day, both adults and jacks. There's more steelhead starting to show, as well as a few Coho. When and if the mouth opens up, we should see another push of fresh kings. As a reminder, the lower river quota has been met and salmon over 23 inches must be released. Your adult Chinook releases need to be recorded on your North Coast Salmon Report Card as normal, and please do not remove adult fish from the water when releasing. The bag limit is two salmon less than or equal to 23 inches and two hatchery steelhead.

"Salmon are staging at the mouth of the Chetco, with lots of jacks and a few adults," said Martin. "Around 30 percent of the fish being caught are hatchery. Fishing will improve over the next several weeks. The outgoing tide has been best. The river closes above river mile 2.2 on Oct. 1 until the arrival of fall rains and increased river flows. Kings and coho also are being caught on the Rogue Bay, while fishing for summer steelhead is good near Agness," added Martin.