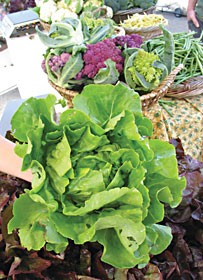 "We are enslaved by speed and have all succumbed to the same insidious virus: Fast Life, which disrupts our habits, pervades the privacy of our homes and forces us to eat Fast Foods... A firm defense of quiet material pleasure is the only way to oppose the universal folly of Fast Life.

"May suitable doses of guaranteed sensual pleasure and slow, long-lasting enjoyment preserve us from the contagion of the multitude who mistake frenzy for efficiency.

"Our defense should begin at the table with Slow Food. Let us rediscover the flavors and savors of regional cooking and banish the degrading effects of Fast Food."

-- from the "Slow Food Manifesto," written in 1989 and signed by delegates from 15 countries to create Arcigola, forerunner to Slow Food International.

To live life to the fullest you have to learn to take things slow. That premise informs the Slow Movement and Slow Food, grand concepts that are simultaneously reactionary and revolutionary at the core. In many ways Humboldt County is already a Slow living sort of place -- particularly Arcata, where the Saturday Farmers" Market is a social center abounding in local and regional foods. You can't dash into the market, grab a bite and rush off.

There's even an Arcata ordinance in place to halt the onslaught of fast food franchises, at least in the main part of town, which relates directly to the origins of the Slow Movement.

The seed for the Slow revolution was the planned opening of a McDonald's franchise in 1986 in Rome's Piazza di Spagna, home of the famed Spanish Steps. Carlo Petrini organized a demonstration against the notion of Big Macs in the heart of Rome, assembling protesters armed with bowls of penne.

Petrini is a believer in eating together as an essential act of social communion. As an alternative to the lonely diner grabbing a quick bite, he suggests conviviality, and as the Slow Food movement he founded marks its 20th anniversary, the 80,000 plus members worldwide have organized into a collection of regional chapters known as convivia . ( Convivia comes from the Latin convivere , "to live with, hence to feast with.")

There are more than 160 Slow Food convivia in the United States, with several dozen in California. Self-described as a "eco-gastronomic member-supported organization," the overall aim of the various chapters is to "counteract fast food and fast life, the disappearance of local food traditions and people's dwindling interest in the food they eat, where it comes from, how it tastes and how our food choices affect the rest of the world."

How this is carried out is open to the individual convivium . "It's a big tent," says Michael Dimock, past chairman of Slow Food USA (currently executive director of the Roots of Change Fund). He sees the movement's most powerful principle as the defense of biodiversity -- "species diversity, culinary diversity, cultural diversity" -- as a reaction to homogenization. The way different people react leads to what he calls "a multi-ring circus" under the big tent, with all sorts of people attracted for their own reasons, but sharing in common a basic love of food.

In his book Slow Food Nation: Why Our Food Should Be Good, Clean and Fair , Petrini defined slow food further. Slow is the basis, but food should also please the palate, be clean for the planet's sake and the system should be fair to the workers, "a concept that ranges from the question of taste to that of variety, from respect for the environment, the ecosystems and the rhythms of nature to respect for human dignity."

Since this is a food lover's paradise, it was perhaps just a matter of time before someone suggested starting a Slow Food Humboldt convivium . The notion actually came up when I had lunch at Jacques Neukom's place in Willow Creek a few weeks ago (see "Table Talk," July 26). Neukom and another guest, Serge Scherbatskoy of Brio Bread and the new Café Brio (see "Table Talk," April 12), were familiar with the organization and its principles and thought a local version should form, but neither had spare time to get the thing off the ground.

Enter Dan D'Ancona and Jared Capallari, young chefs who just moved to town. Capallari first heard about Slow Food from one of his teachers while studying nutrition as part of a restaurant program at Penn State. He sees the movement as a reaction to the industrialization of food in modern times. "We need to return back to the way it used to be, with things like open air markets, farm to table," he says.

"It's a mindset," says D'Ancona, who learned the restaurant business in various Philly kitchens. "Slow food is a reaction to everything that's happened to food in the last 25 years; it's basically a fight against what food scientists have done." As an example, he points to peanut butter and jelly sandwiches with an eight-month shelf life made overseas for use in school lunch programs. "Slow food is strongly involved in promoting healthy school food programs. Kids need to be aware of what they're eating and that there's food that tastes good and is good for you.

"I think of Slow Food as getting back to the roots, back to the basic elements of cooking and building up from there. We need to figure out what American food is -- for the first time."

Regional is another key element, but, says D'Ancona, that doesn't have to be limiting. "It's simply making a conscious effort to use fresh local products," he says. "It could be Italian-style food, but when you use local ingredients, it becomes local."

What is Humboldt's regional cuisine? That's hard to define precisely, but a group of dedicated food lovers will offer a glimpse at the first local Slow Food event, planned for Sunday, Sept. 9, at Café Brio on the Arcata Plaza.

D'Ancona and Capallari will be cooking something up, as will Scherbatskoy. Neukom is providing fresh produce. Henry Robertson of Henry's Olives will supply olives. Manning the grill: Dexter Villamore, formerly of Barcelona Café currently employed by the WildPlatter Café Tamra Tafoya of Celebrations Catering is part of the team, as is Peter Jones from Folie Douce and Cindy Graebner of Fickle Hill Old Rose Nursery and a few others (including this writer). Franz Rulofson of the College of the Redwoods" Sustainable Organic Agriculture Farm will offer a range of Shively produce, including heirloom tomatoes, squashes and Yukon Gold potatoes. Wild Chicks Farm is supplying organic, free-range chicken for the entrÈe.

The menu? It's subject to change, depending on what's fresh that weekend, but so far the plan is to start with Antipasti Misto, which will surely include Henry's Olives. Then it's Tomato Caprese with some of Neukom's heirloom toms and fresh mozzarella made by D'Ancona, then Villamore's Gazpacho Barcelona. The main course, Wild Chick Chicken grilled with Oregano and Garlic, will be served with polenta and assorted grilled vegetables. That's followed (Euro-style) by Butter Lettuce Salad with greens from G Farms. Brio breads will be served throughout, and dessert is a Brio Seasonal Fruit Galette. And of course there's wine included, from local vintners (to be determined) and some French artisan varietals, at Scherbatskoy's insistence. (I suspect that Petrini, who speaks of "virtuous globalization," would approve.)

Advance tickets are required ($60 prix fixe ) for the inaugural Slow Food Dinner on Sunday, Sept. 9, at 6 p.m. at Café Brio, on the corner of 8th and G sts. in Arcata. You can buy them at Café Brio, or at the North Coast Growers Association information table at either Eureka Farmers" Market (Tuesdays in Old Town and Thursdays in Henderson Center, both from 10 a.m.-1 p.m.). They'll also be available at the Saturday Farmers" Market on the Arcata Plaza (9 a.m.-2 p.m.) at the Brio Bread booth near the William McKinley statue. For further information on dinner or plans for the Humboldt convivium call 826-1224 or 443-2364. For more on Slow Food International, go to www.slowfood.com. For Slow Food USA, check www.slowfoodusa.org.