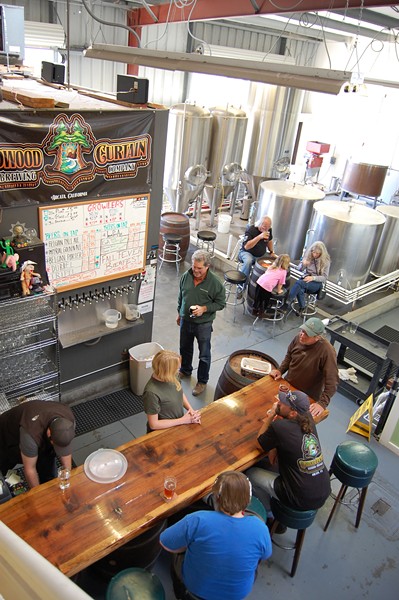 Bottles? We don't need no stinkin' bottles. If you've ever tasted a Redwood Curtain beer, odds are it was from the tap, maybe even produced mere feet away from where it entered your face.

Located in the unglamorous Bay View Industrial Center on Arcata's South G Street, Redwood Curtain Brewery's Tasting Room is low on frills. If you belly up to its bar and you find yourself curious about the scale of the production that produced the beer you're drinking, simply turn your head about 30 degrees to the right. It's all right there. Want a table? You're likely going to have to settle for a stool next to an old repurposed wooden barrel. Hungry? Hope you like Goldfish Crackers. That's all these brewers serve.

But for the crowd Redwood Curtain is catering to, the unembellished nature of the surroundings is likely part of the appeal. Not even two years old, Redwood Curtain has already won the hearts of hardcore beer admirers. "We're going for the beer-geek crowd -- the home brewers brewery," co-owner/brewer Eli LaRue says. "We're trying to make the best beer possible, not anything that is designed for drinkability or to be crowd pleasing." Mission accomplished. The Journal's expert beer panelists were all full of glowing reviews of the product.

As opposed to other industries whose more established entities might be cold to a new kid in town, Humboldt's brewers have warmly embraced Redwood Curtain, LaRue says. "I could say that at one point or another every brewery in Humboldt has helped us out with something along the way."