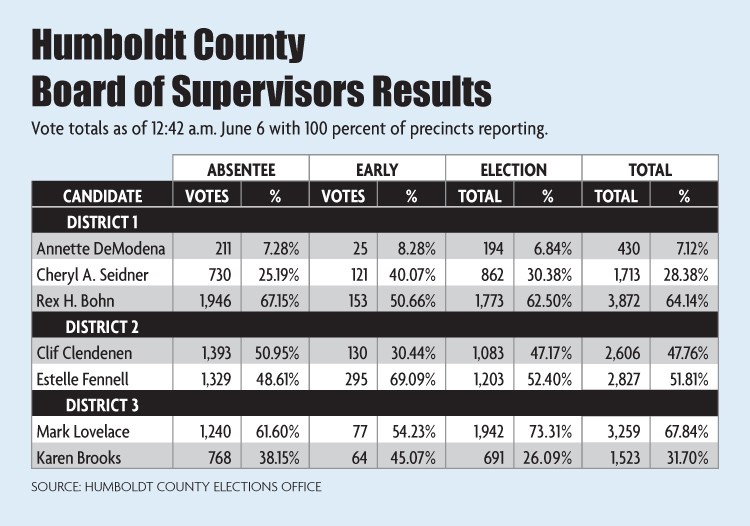 When two new county supervisors take their seats at the end of this year, the balance of power in Humboldt County will have shifted toward developer interests and property rights. On Election Day, businessman and frequent community volunteer Rex Bohn earned more than 64 percent of the vote in a three-way race in the 1st District, easily besting former Wiyot Tribal Chair Cheryl Seidner (28 percent) and retired teacher Annette De Modena (7 percent). Bohn will replace Jimmy Smith, who chose not to run for reelection.

The 2nd District race was much tighter, but by the end of the night Estelle Fennell had edged out incumbent Clif Clendenen -- 52 percent to 48 percent. Fennell, a former news director at KMUD, served nearly three years as executive director of the Humboldt Coalition for Property Rights, a private advocacy corporation that has sought to influence the county's general plan update. (About 1,000 mail-in ballots had yet to be counted Tuesday night -- almost certainly not enough to change the 2nd District outcome.)

What will these results mean for the county?

It's often difficult to predict how a person will perform the job of county supervisor based on election season. Campaigns tend to focus on simple, noble-sounding concepts (leadership, vision, the future) and grand, reassuring promises (job creation, environmental stewardship). But actual governance on the county level is boxed in by limitations, from state and federal restrictions on how funds can be spent to the will of the electorate and, currently, the depleted size of the county's staff and budget.

The arena where county supervisors have the most power and discretion is in land zoning. When people talk about the "balance of power" on the board it's generally in relation to controversial zoning questions, such as where to build new affordable housing, how rural landowners are allowed to subdivide their property, and where commercial and industrial buildings can be located.

With the county's general plan update nearing completion, the new board could well have a significant impact on the document, which will guide development in the county's unincorporated areas over the next couple of decades.

Interviewed last week, outgoing 1st District Supervisor Jimmy Smith said the updated plan may or may not be approved before the new board is seated. Even if it gets passed by the end of the year, Smith pointed out, controversial elements can still be "pulled back and reconsidered based on new information or the desire of the new board of supervisors and planning commission." In other words, the plan won't be set in stone, and a more development-friendly board could decide to ease zoning restrictions.

Things are already looking up politically for local developers, who have long felt restrained by what they characterize as "no growth" political adversaries and less-than-helpful staff in the county's building and planning divisions. Two of their chief nemeses, former Community Development Services Director Kirk Girard and Supervising Planner Tom Hofweber, have left the battlefield. (Girard took a job in Santa Clara County; his last day is Friday. Hofweber retired last year).

Bohn and Fennell will likely change appointments to the planning commission. Current commissioner Denver Nelson, who represents the 1st District, has been a staunch river advocate, opposing proposals to sell our region's abundant water to outside jurisdiction, will almost certainly be replaced. (The seven-person planning commission includes one member from each of the county's five districts, appointed to a four-year term by their respective district's supervisor, plus two "at-large" members who must be approved by the full board of supervisors.)

The next board will also have to deal with a host of challenges spawned by last year's statewide corrections realignment. The transition, which went into effect in October, shifted responsibility from the state to counties for the custody, treatment and supervision of people convicted of certain nonviolent, non-serious and non-sex-related felonies. Bill Damiano, the county's chief probation officer, said the number of people on probation locally has increased from roughly 1,500 to nearly 1,700 since realignment went into effect, and it's continuing to grow.

So far, the state has provided realignment-related funding to counties, but the future of that funding is not guaranteed. Ultimately, Damiano said, the board of supervisors must make sure that this influx of offenders is properly monitored and, where appropriate, reintegrated into the community. Recent cuts across all county departments will only make that more difficult. District Attorney Paul Gallegos last week threatened to stop prosecuting most misdemeanors if his office's 2012-13 budget isn't increased.

Another big issue on the horizon is the ongoing effort to expand local airline service. A deal with American Airlines to do just that fell apart earlier this year after the county scrambled unsuccessfully to come up with a $1 million revenue guarantee for the airline. Supervisors and staff were hindered in the effort by restrictions on various pots of public money, including the Headwaters Fund and the county's own general fund. They also faced resistance from skeptics who haven't forgotten the half-a-million dollars in revenue guarantees that the county gave to Delta Air Lines in 2008, only to see the airline leave the region less than two years later. American Airlines officials say they remain open to serving Humboldt County, but the next board of supervisors will have to develop a more feasible plan. Fennell has said that she wouldn't support spending Headwaters money to "subsidize a bankrupt airline."

And of course, this being Humboldt County, the sticky-icky challenges surrounding marijuana remain ever-present.  With state and federal policies at odds, regulation has been left to the counties. Mendocino, our neighbor to the south, developed an innovative and, by most accounts, largely successful system of licensing and regulating medical marijuana, only to watch federal officials target and arrest the providers who were complying with those regulations.

Humboldt County supervisors were in the midst of developing their own ordinance to regulate outdoor grows when the U.S. Attorney's Office announced its intent to aggressively prosecute medical marijuana dispensaries in the state. The county responded by issuing a moratorium on dispensary permits, effectively kicking the bong down the road.

The board of supervisors is also responsible for selecting a representative to the North Coast Railroad Authority. Currently that's Supervisor Clendenen. Its next appointment could prove significant to ongoing efforts to establish a trail (or trails) along the authority's rights-of-way.

Smith said that his replacement -- Bohn, as it turned out -- will have to navigate the tempestuous politics surrounding Shell WindEnergy's proposed 50-megawatt wind farm along Bear Ridge, south of Ferndale. The project has proved to be controversial among Smith's 1st District constituents, and its future still hinges on approval from the county planning commission (as well as the state Coastal Commission).

When Virginia Bass unseated Bonnie Neely two years ago, the board tacked right politically, following the same trajectory as the City of Eureka -- and the rest of the country, for that matter. Now, with Bohn replacing Smith and Fennell replacing Clendenen, the board is poised to look even friendlier to local development interests and political conservatives. Third District Supervisor Mark Lovelace now stands as the lone environmentalist on the board.

Asked about just this possible scenario at his election night party, Lovelace admitted that it would change things. But he said political differences can be blown out of proportion. "We get caught up in the issues that divide us, but the issues that concern the people in the district and affect them are not all related to the general plan," Lovelace said. With budget cuts and a sagging economy, he added, "a big part of the job is just keeping the lights on and the doors open."