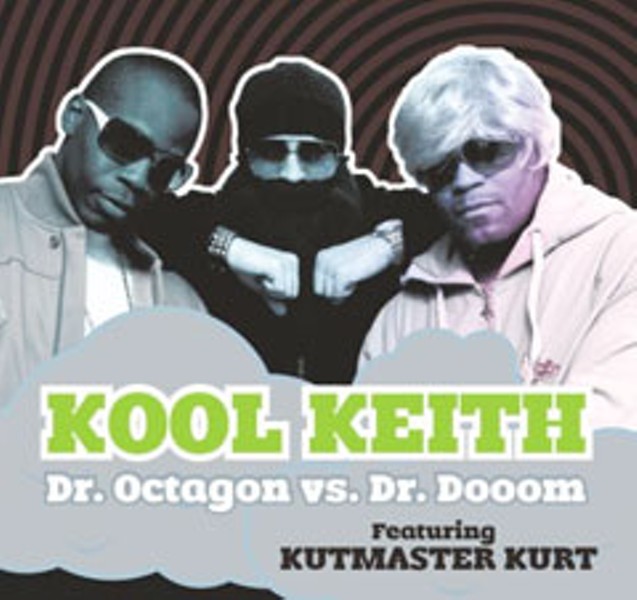 Perhaps Kool Keith is krazy, but that's part of his appeal. The New York native Doctor of Dooom and eight-sided polygons has been rapping explicit non-sequiturs since 1988, and experienced a brief institutionalization stint after the release of his first album with the Ultramagnetic MCs titled Critical Beatdown. Some 21 years later the man is still weird, but genius is sometimes like that: repulsing yet attractive.

Regardless of your opinion of him, it seemed genuinely suspicious that he would be playing a show in Arcata -- at Humboldt Brews.

As I arrived I tried to blend in, disguising myself so as not to be identified as "uptight" or critical of my surroundings. A pitcher of Anchor Liberty and a brimming pint glass hid my notebook, and my hair (let down for the occasion) hid the absolute telltale lameness of my hot pink earplugs. A VJ struck up the sound around 11 p.m., busily moving amongst panels of levers and knobs, imperceptibly pushing buttons as old-school videos played behind him to seamlessly transitioning music. I looked on in suspicion. Was this Kutmaster Kurt? He was either very good or it was all pre-edited and he was merely pantomiming. Either way, no one seemed to care.

Post amalgamation of remixed MC Hammer, Cypress Hill and The Cars, came a nervous young man, apparently disguising his lack of lyrical content or sensibility with a repetitious announcement that "[he] want[ed] that pussy," which seemed to excite a number of people who felt the same.

By midnight the moment most had been waiting for had come, though it arrived unannounced and took a rolling whisper through the crowd to confirm that, yes, that was indeed Kool Keith up there, rocking back and forth on stage. A string of songs I didn't recognize followed by his 1996 hit "Blue Flowers" forced me to leave the stifling center for the more "business" stage-side wall where photographers stood adjusting flashes and checking camera screens.

"Girl let me touch you there, I want to feel you," Keith shivered and cooed as women cried out in a sort of Beatlemania, pushing their boyfriends aside and reaching for the stage. "How many women are here to keep their clothes on," served as a segue for "Take Your Clothes Off," the sexual-tension breaking point for many women who simultaneously breached the sanctity of the stage to dance around the DJs with wild, unfettered abandon.

Some time after 1 a.m. I left HumBrews for Don's Donuts, which proved just as crowded, this time with the dozens bemoaning the fact that they'd become too educated and PC to enjoy half-naked co-eds desperately scrambling over each other to strip on stage. One sulky man confessed to leaving only a few tracks in. "Did he play 'Blue Flowers?'" he asked. "He did," I said, hesitatingly. "It was all right."