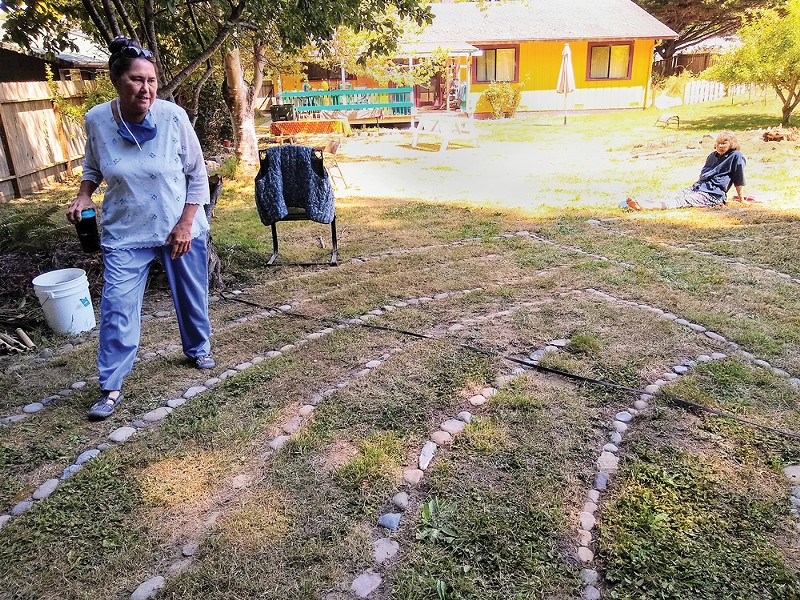 Louisa Rogers Rockie Head and Susie Laraine at the outer rings of their meditative stone labyrinth.

When I walk a labyrinth, my mind becomes almost still. So when I interviewed Susie Laraine and Rockie Head, two Eureka women who built a labyrinth, I expected them to be soft-spoken, even reverent. Instead our conversation was punctuated with raucous laughter as we sat apart on the grass next to the labyrinth in Head's backyard.

Old friends, Laraine and Head met at a Christian-flavored meditation group called Centering Prayer, started 20 years ago by the late hospital chaplain Ken Meece. Before the pandemic, the group met weekly in the chapel of Eureka's Christ Episcopal Church, where few knew that the chapel's carpet sheltered a labyrinth underneath. Arriving in 2018, the new rector Daniel London was intimately familiar with labyrinths, having been married on the one at Grace Cathedral in San Francisco. Soon the carpet was gone, the floor exposed and the labyrinth freshly painted and appreciated.

A labyrinth is not a multi-path maze. Rather, it consists of an uninterrupted winding path demarcated by stones. Walking a labyrinth, an ancient spiritual practice used for meditation and prayer, typically takes about 15 minutes.

Laraine, who always wanted to build a labyrinth, never had a garden big enough, so she and Head were a perfect match: Head had the space; Laraine had the skills. A ceramic artist and natural builder, Laraine had previously created pieces like a life-sized person playing a saxophone out Styrofoam packing material gleaned from trash cans for the Morris Graves Museum of Art's annual Junque Art Exhibition.

"Even though the labyrinth is in my backyard, I think of it as Susie's," says Head. "I would never have built this on my own. I'm not a gardener. I had foster children and dogs and they wreaked havoc on the yard."

The two began by visiting local labyrinths, including one on the grounds of Hospice of Humboldt and Peter Santino's "All Happy Now" spiral at the Humboldt Botanical Garden.

Laraine is fascinated by rocks and has collected and used them to build a number of pieces. "Put me by a riverbed and I can be left alone for hours," she says. She and Head spent last fall driving to each of Humboldt's rivers to gather stones. Though the outings were fun, transporting the rocks was no easy matter. At first, they put the stones into Head's dog food bags and lugged them up the river bank to the car. Later they borrowed a friend's baby stroller to cart the rocks.

Their labyrinth has a radius of 19 feet. "Nineteen is a mystical number in the Baha'i religion," explains Head, a follower of the Baha'i and Sufi faiths. They measured the 2-foot ring widths by placing safety pins on the training leash for Head's dog Dash. "High tech!" she laughs.

Rather than follow a logical order, "We'd just look at each other and say, 'What shall we work on today?'" Laraine says. "We did the outside ring first, the innermost ring next, and then the intermediate ones." On the grass, she showed me how. "You dig a hole with a trowel, make an indentation for each stone, place the stone in carefully and pack dirt around it." Meeting once or twice a week, they spent two to three hours working each time.

They made some mistakes, like filling in all the rings with stones and forgetting to leave openings where the walker makes a turn. And they haven't decided what to put in the center — at the moment a pink hula hoop adorns the space.

From a plaster mold, Laraine created colorful ceramic glazed stones that they placed at the turning point of every ring. Each stone represents a different faith: Baha'i, Christianity, Judaism, Islam, Buddhism, Taoism, Hindu, Sikhism and Shinto, with another representing all Native American religions. "One goal of Baha'i is is to help others on their path and encourage each individual's spiritual practice, so we wanted to represent as many faiths as we could," says Head.

The two walk the labyrinth regularly, as do fellow meditators of the open-air Centering Prayer group. "I'm always going this way and that," Laraine says. "Walking the labyrinth helps me to slow down."

Laraine and Head joke that knowing what they know now, they could become labyrinth consultants. They'd probably have plenty of clients. According to a recent Bloomberg article, building garden labyrinths is a popular trend during the pandemic.

But whatever happens in the future, the process has been a spiritual journey for them. "During the time of shelter in place, I haven't been able to serve the community in my usual ways, since meeting face-to-face is restricted," says Head. "Building a labyrinth gave me a way to be in the natural world and to make a contribution."

Louisa Rogers (she/her) is a freelance writer based in Humboldt.

Down and Dirty Garden Labyrinth meditation