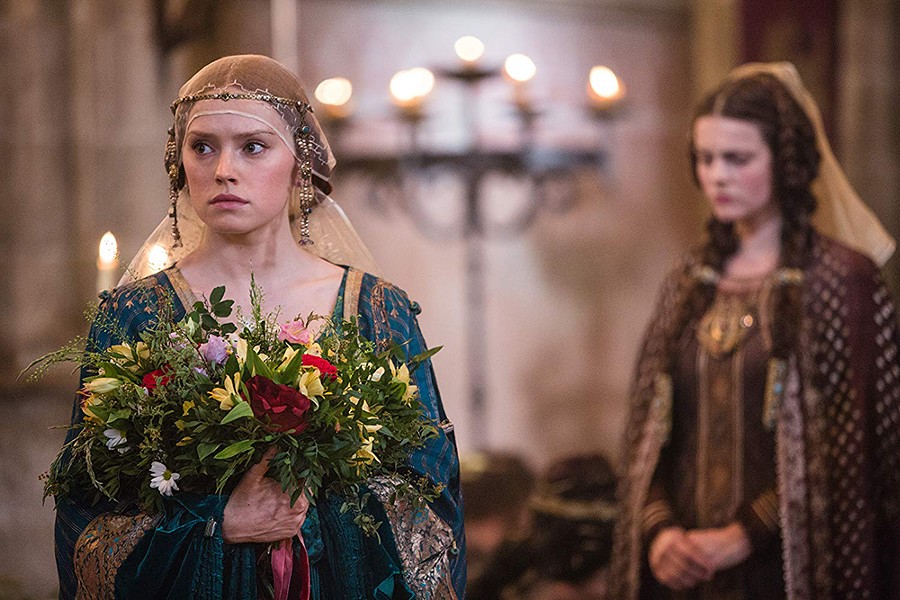 When the bride says you can totally wear this bridesmaid dress again.

OPHELIA. As the title character of Ophelia tells us at the outset, "It is high time I should tell you my story myself." So begins this re-telling of Shakespeare's Hamlet, one that adds dimension and depth to its characters. Shakespeare fans will appreciate Ophelia but so will non-fans. It's a story of empowerment and choice.

When her story opens, Ophelia is a little girl. But she can't go to school with her friends; girls aren't allowed to learn. They can't be in libraries. But the (sometimes) good Queen Gertrude (Naomi Watts, who also plays another character) takes the motherless girl under her wing as a lady in waiting. Young adult Ophelia is played by Daisy Ridley, an ethereal-looking redhead (at least, in the movie). As she grows up, she's constantly reminded of her stature as a woman of lower class by her peers. At one point she muses that she'd like to learn the healing arts but is told, "You're a lady in waiting. Learn to wait." For what, Ophelia asks? A husband, comes the reply.

Whether she takes this advice or not is at the crux of the plot, which differs somewhat from that of Shakespeare's original play. The film weaves in and out between the story we know — the death of the king and the queen's subsequent marriage to his power-hungry brother Claudius (played by Clive Owen in a long, dusty cape and greasy hair) and all the shenanigans the characters get up to — and Ophelia's story. In this telling she actually has a story and it's much more interesting than you might think.

Australian filmmaker Claire McCarthy, along with screenwriter Semi Chellas (Mad Men, The Romanoffs) have given us more to chew on, transforming Ophelia from merely a scorned, virtuous girl into someone with agency.

There are many times throughout the film that women take power — at least, the amount of power available to them, whether they sneak or steal it. But the women in the film aren't just trying to gain power in the same way men are in the play; they mostly just want independence, like all girls. Of course, this can't be gained without consequences.

In an interview with Vanity Fair, director McCarthy noted, "We decided in a world in which women are not valued ... they would use the tools that they already have in their hands or they'll use the tools of that world, and that world would bring them down." That world would be the Middle Ages, when women underwent forced marriages and being put to death for witchcraft, among other things — see this movie for details! However, McCarthy does a good job of walking the line of what might have been possible for a woman with a sense of self during that time period, and she shows her three main female characters to be resourceful and complex.

Hamlet's father makes an appearance from this side of the grave in this telling. Thus the first time Hamlet returns from his studies, his father isn't dead yet, and Hamlet (George MacKay), unencumbered by the burdens of revenge, flirts openly with Ophelia. But Hamlet himself is transformed in this telling as well. His relationship to Ophelia makes him more accessible and logical, propelling him to action. He's not a waffler; he's a man who knows what he wants.

The plot, embellishments aside, is no less gruesome or tragic than the original Hamlet. But there is a satisfying aspect to it with regard to Ophelia, as well as the other main female characters. A multicultural cast adds sparkle to this film, though one wonders why, if we're going to have black and Asian actors, McCarthy doesn't just cast some of them in the principal roles. All those lead roles are filled by white people, ultimately emphasizing the fact that roles of servants are filled by people of color.

The dialogue itself melds a Shakespearean style with more modern language in a clever way as to make the plot expansion seem seamless — iconic lines like "neither a borrower nor a lender be" aren't out of place at all.

With stunning cinematography (it was filmed in the Czech Republic) and a costume color palette of saturated earth tones, dusty-rose and turquoise, Ophelia has a somewhat fairytale sensibility. I suppose Shakespeare's plays are old enough now to seem like fairy tales and, since Hamlet takes place in the Middle Ages, the production design values fit right in.

Perhaps Ophelia dies in the first telling of the story because Shakespeare couldn't imagine a world where this virtuous, motherless woman could triumph. These filmmakers can. PG13. 114M. MINIPLEX.

THE ART OF RACING IN THE RAIN. Racing as a metaphor for life. As told by a dog. Voiced by Kevin Costner. PG. 109M. BROADWAY, FORTUNA.

BRIAN BANKS. Aldis Hodge stars in the real life story of a college draft football player who's wrongly convicted of a crime and fights to clear his name through the California Innocence Project. With Greg Kinnear. PG13. 99M. BROADWAY.

THE FAREWELL. Director Lulu Wang's drama about a Chinese-American family that discovers their matriarch's terminal cancer and decides to keep it from her as they come together in China for a wedding. Starring Awkwafina and Tzi Ma. PG. 98M. BROADWAY.

THE KITCHEN. While their husbands do time, the wives of New York gangsters take up the business. Starring a very serious Melissa McCarthy, Elisabeth Moss and Tiffany Haddish. R. 103M. BROADWAY, MILL CREEK.

SCARY STORIES TO TELL IN THE DARK. A group of kids find a cursed book of scary stories in a haunted house and they start to come true while you stress-eat popcorn. PG13. 108M. BROADWAY, FORTUNA, MILL CREEK.

FAST & FURIOUS PRESENTS: HOBBS AND SHAW. A Fast and the Furious spin-off with an unlikely alliance. Is it OK for me to root for the bad guy (Idris Elba) in this one? PG13. 134M. BROADWAY, FORTUNA, MILL CREEK.

ONCE UPON A TIME ... IN HOLLYWOOD. Quentin Tarantino recreates 1969 Los Angeles for a deceptively nuanced though bloody as ever movie about a washed up actor (Leonardo DiCaprio), his stuntman (Brad Pitt) and the murder of Sharon Tate (Margot Robbie). R. 165M. BROADWAY, FORTUNA, MILL CREEK, MINOR.