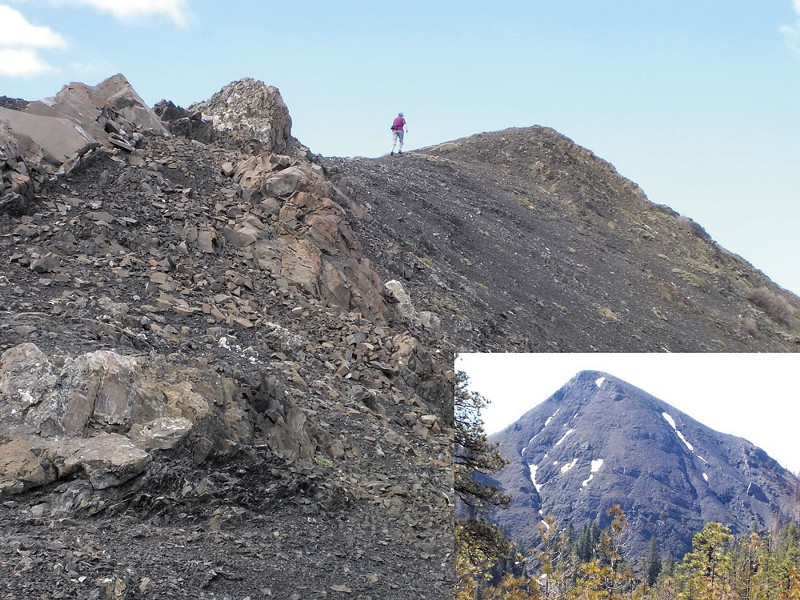 Photo by Barry Evans Despite its resemblance to a classic conical volcano, Black Lassic, at 5,916 feet, owes its shape to natural erosion.

Straddling Humboldt's eastern border with Trinity County, the three peaks known collectively as the Lassics on the edge of the Mount Lassic Wilderness make for some fine nearby hiking. First, though, a little about their geology and the eponymous Chief Lassik.

Geology: While the shape of the Black Lassic peak is reminiscent of a cone volcano, it's actually composed of marine sedimentary rocks that started life on a strip of oceanic crust lying between the Sierras and our local subducting Gorda plate. The three peaks are part of the 10-square-mile Lassic exposure, consisting of chunks of that ocean crust mixed into its underlying "serpentinized" (rock transformed via heat and water) mantle. The exposure — what would eventually be eroded into the three Lassic peaks — was thrust into the Franciscan Complex around 150 million years ago, when the first birds were taking to the skies.

The Franciscan Complex is a messy mélange of deformed, metamorphosed sedimentary and volcanic rocks scraped off the Gorda plate, one of the three tectonic plates meeting at the Mendocino "Triple Junction" which dominate our regional geology. The 80-mile-wide swath of the Franciscan roughly follows the courses of the Van Duzen, Mad and Trinity South Fork rivers south from Humboldt Bay.

Chief Lassik: The Set-ten-bi-den ke-ah, or Lassik people, were a semi-nomadic sub-group of southern Athapaskan speakers who wintered on the Eel River near present-day Alderpoint. Chief Lassik's misfortune was to be leader of the band in the early 1860s, a time when white people were shattering the lives of native tribes following discovery of gold on the Scott River. Construction of pack-train routes from the coast and fencing of fertile coastal valleys in order to raise beef cattle brought a swift end to the Lassiks' way of life.

After briefly resisting encroachment of their traditional hunting and gathering grounds, Chief Lassik and his band were captured in 1862 and interned, first at Fort Humboldt, then briefly in a makeshift prison on the Samoa Peninsula. That's where the editor of the Humboldt Times saw them, writing in September 1862, "Chief Lassik was stubborn and would not speak." Soon after, the Times reported that 700 to 800 "wild Indians," including the Lassiks, had been relocated north to the Smith River Reservation.

Within a month, Chief Lassic and three hundred of his band escaped and made the long trek back to their Eel River Valley homeland. The story ends tragically; most, including the chief, were recaptured and taken to Fort Seward, 4 miles north of Alderpoint. According to Lassik's niece Lucy Young (who was present), Lassik and about 40 of his followers were bound, shot and burned. Lucy, or T'tcetsa, was subsequently sold into slavery. She escaped and was recaptured several times over. She found peace at last living in Round Valley near Covelo, telling her story into the 1930s.

Hiking: Two of the Lassic peaks, Black and Green, are doddles to climb. (Green Lassic is shown on some maps as "Signal Peak" after a 1900 heliograph station there.) Red Lassik, which was mined for manganese during WWII, is trickier because of its steep talus and thick brush. All three can be climbed in half a day, with fine views from all. To get there, head out on State Route 36; 5 miles past the Dinsmore airstrip, turn right onto Van Duzen Road. In about 8 miles, turn right (west) on poorly-signed Forest Service road 1S07. The conical form of Black Lassic will loom ahead in about 15 minutes; drive as close as your vehicle will allow. You probably won't find water, but you will find poison oak — beware!

Barry Evans (barryevans9@yahoo.com) thought he could recognize volcanoes. He was wrong.