David White at the Upstairs Gallery 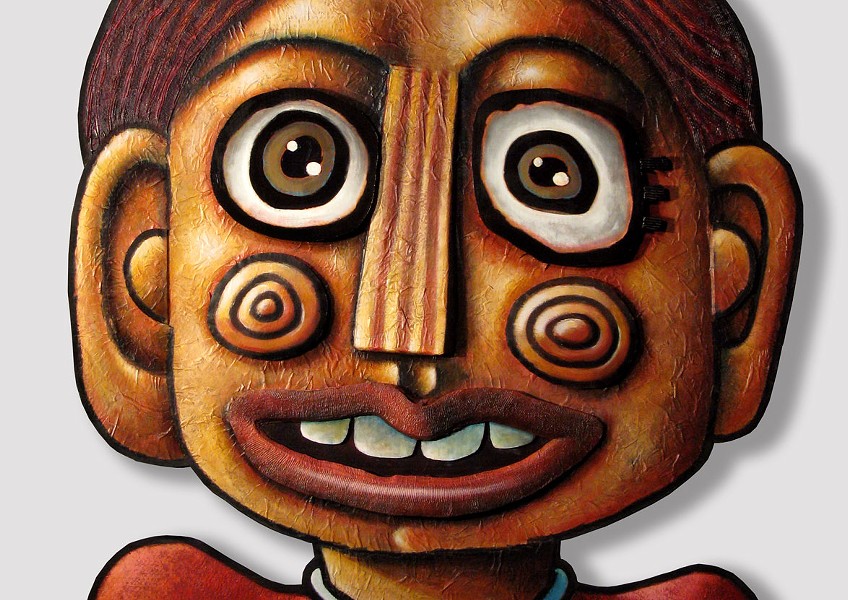 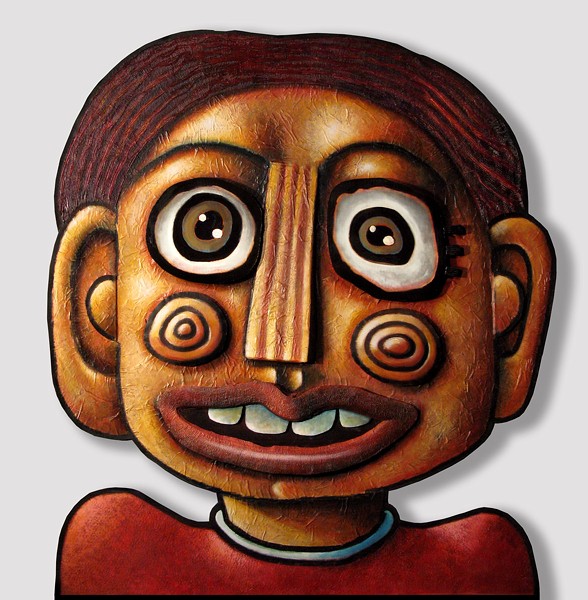 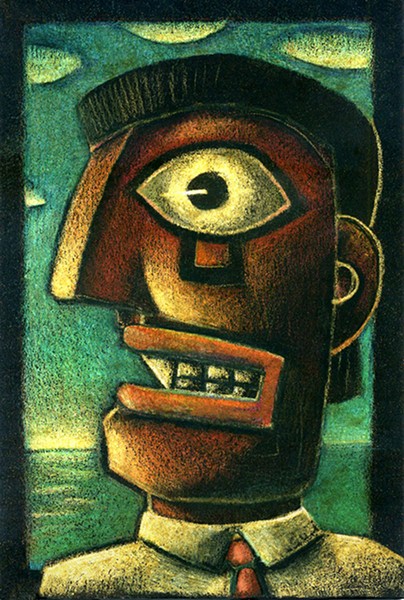 Who at the bank can't relate to "Fearful"? painting by David White

"It's getting harder and harder to make people laugh or smile," says multimedia artist David White. His wacky, comical characters have a life of their own. Somehow, though, we can all relate to them, laughing with instead of at them. White likens it to theater, noting that "through laughter, you can slip in a truth." Truth is that times are tough, and we need artists like David White to remind us to smile every now and then.

On a visit to White's studio, the top floor of an old barn in Arcata, he's cheery, wearing a red, paint-splattered hoody zipped up over a sweater. It's cold, with wind whipping through gaps in the exposed exterior planks, but he's happy to have this studio after losing another one on Humboldt Hill. He's just moved in, but it's already filled with paint, lights, scaffolding, framed pieces, works in progress and even a drooling, adorable Siamese cat.

Hung up on the back wall are four huge portraits, each one nearly 5 feet tall. They're in various states of completion, getting readied for his new show, "Fool Me Once," at the Upstairs Gallery in Arcata. White, who is fascinated by site-specific work, has painted them exclusively for the show.

The Upstairs Gallery, as its name suggests, sits above the lobby of a bank, and customers depositing or withdrawing cash might not even be aware that the gallery is there. White crafted these oversized portraits with juicy colors and clownish features to peer down into the lobby, enticing viewers to take a closer look. They're not imposing, but they certainly have a presence.

This being a bank, White has given his characters expressions that many might make when opening their latest statement. One figure grits his teeth, one eye wide and green as a dollar bill. Another looks scared, her bulging eyes the size of dinner plates, pointy lashes complementing her frilly lace collar. A little boy with a red shirt is in the mix too, looking slightly pensive yet youthfully eager.

As with all of these portraits, the boy is constructed out of painted cardboard and textured with lightweight paper bags. Large waves roll through his chestnut hair, a rough surface distinguishes his curvy mouth and his skin has the bumpy quality of papier-mâché. Like many of White's works, three-dimensional elements break the flat plane of the painting. The boy's nose, striped like a piece of bacon, juts out at the viewer. His cheeks, eyes and even his earlobes rest just above the surface of the painting, casting slight shadows and mimicking the contours of a face.

Playing with the interface between two and three-dimensional art is nothing new to White. He grew up in a family of carpenters and masons for whom using tools and building things was a way of life. In school, his art teachers couldn't figure out whether he was a sculptor or a painter, but he didn't care. White wanted both.

He continues to blur the lines, creating colorfully painted objects from paper that could just as easily be made from clay or bronze.

"I don't want to be tied into a long process that I have to be committed to," he says, explaining his love for paper. "Paper is really immediate. I can keep working, I can rip off or add something to it" during any stage of the process.

What White considers process, many people would consider play. He's often working on at least four pieces at once, building them out of cardboard, layering them with newsprint and glue, or painting them with anything from house paint to acrylic to spray paint to varnish.

Working in series allows White time to ponder the creative problems that arise in his work.

"Every time I paint, I learn," he says, and sometimes one painting or project will give him clues about how to address issues with other works in progress.

For example, alongside the large portraits White is making for "Fool Me Once," he is also painting a series of smaller portraits. Cutting sheets directly from a roll of heavyweight black roofing paper, White begins these paintings by laying four or more on the floor of his studio. Without thinking too much about the end product, he'll splatter them with loose strokes of white paint, roughly outlining some facial features.

The next day, he'll hang one on the wall and mask off certain parts so that the original splatters show through, building up successive layers of paint to create the portrait. When one needs time to dry he'll move to another, going from piece to piece, "like playing the piano." This continuous style of working is so important to White that he'll start a new painting every day just to keep the fire of creativity continually burning.

Even with all the playing around and goofy expressions he creates, White is deeply serious about his work and its effect upon those who see it. He works almost exclusively with figures and faces as a way to immediately connect with people — viewers who relate to the situations his paintings depict.

"As soon as you put eyes on something there's this humanistic connection between portraits and people," he says.

Like a good song, the image of a face can access our core nature, allowing for an interaction between viewer and painting that is, in some ways, more difficult to achieve with subjects like landscape and still life. This interaction is what White is seeking above all else.

"I'm trying to make art that everybody can dance to," he says, shuffling his feet in his chair. "Whether you're five or 85, you can jump in and you know the steps."

If you'd like to dance along to David White's show, "Fool Me Once," stop by the Upstairs Gallery for an artist's reception during Arts! Arcata on Dec. 13 from 6 p.m. to 9 p.m.