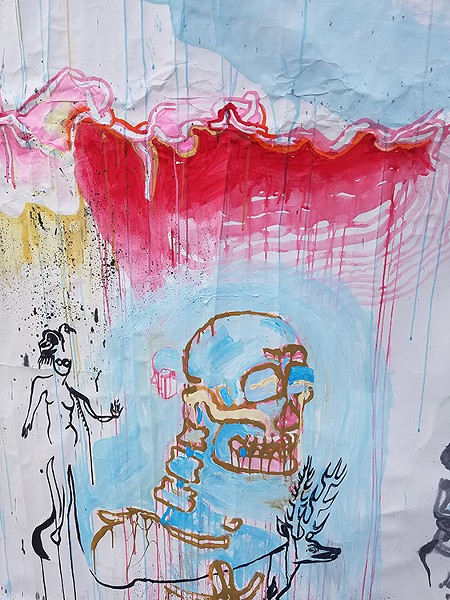 Photo by Gabrielle Gopinath A detail from Laura Corsiglia's 2004 painting "State Change," in ink, acrylic and coffee on paper.

Where do pictures come from? Laura Corsiglia's paintings proceed as directly as possible from the subconscious — the part of the mind that exists outside the grasp of the self and that we only perceive in those infrequent moments when it breaches the surface of waking life via Freudian slips and fragments of remembered dreams.

Corsiglia's new show at Black Faun takes its title from her recently completed series of 12 paintings on paper, collectively titled Nesting Materials. It also includes landmark pieces from the artist's earlier oeuvre, including the big 2004 painting "State Change" and a 2005 series of works on raw canvas titled "Two-Steps" that are nailed to the wall. Double-sided, translucent drawings called the "Zephyrvellums" hang in the windows. The monumental mixed media painting "Scroll" wraps around the gallery walls like a filmstrip or a frieze.

Corsiglia grew up in British Columbia, the daughter of a linguist, and received her MFA from the Ecole Nationale Supérieure des Beaux Arts in Paris. Living in Humboldt since 2010, she is locally known for her work involving wildlife; in her professional career, she directs the Humboldt Wildlife Care Center and the affiliated nonprofit Bird Ally X, which she and her partner, Monte Merrick, co-founded.

Corsiglia has written that her work as an artist and her work as an advocate for wildlife are intimately intertwined and the paintings and drawings on display here communicate a strikingly powerful sense of kinship with non-human life forms. Images of wild animals are omnipresent. Animals appear the way they frequently do in traditional work by artists from indigenous American cultures — as icons and totems, familiar spirits that remain in large part unknowable, perhaps cosmic, despite our best efforts at apprehension.

Corsiglia often works on a horizontal support, washing, splashing or inscribing as the moment requires. Many compositions circle around a central void, emphasizing edges. Motifs take shape without premeditation. Content might start anywhere. Imagery notates the movements of the mind when it is allowed to drift in a free state. Compositions are developed in the most intuitive way possible.

There are no stable groundlines in these works and certainly no hint of a horizon. Corsiglia makes no effort to render her icons in external space; it's not their habitat. Figures float in tissues of washy color. Some seem to be struggling to emerge from wreaths of coagulating pastel cloud. Forms often congregate into discrete groups or nodes, any single element of which might sport multiple scions. Figures are both polymorphous and perverse. Women give birth to beasts and vice versa. The metamorphosis of figures is not an exception but the rule.

Corsiglia's blunt, fluent, forceful line explodes out of the expected grooves and rockets off track. In one piece, a smoking death's head modeled on an early work by Vincent Van Gogh gives way to a series of roughly contoured color blocks, then to a bird figure modeled on a totem carving made by the Kwakwaka'wakw people of British Columbia. In many of these pictures, the associative process through which one dreamtime image succeeds another becomes beautifully transparent, while the confident and unquestioning fluidity that characterizes this process is faithfully transcribed.

It's ironic that the realm of dreams is so often envisioned as cloud-cuckoo land — a safe space for softies — when, in fact, anyone who's thought about the events that transpire in one's non-waking life will recognize that dreams happen for a reason. The dreaming brain tackles the psychic labor that the ego can't handle during prime-time hours. There's normally an urgent task to be accomplished, a source of anxiety to be confronted, or a mission at hand.

The comedian Mitch Hedberg once complained, "Dreaming is work, you know — there I am in a comfortable bed and then next thing you know I have to build a go-kart with my ex-landlord," adding, "I want a dream of me watching myself sleep." If such a dream could ever be translated onto paper or canvas it might look like Corsiglia's airy paintings, with their expanses of glowing color and their absence of solid ground.

Laura Corsiglia, Nesting Materials will be on display at Black Faun Gallery in Eureka from March 3 - 31. The Arts Alive opening on March 3 at 6 p.m. will feature music by the artist's experimental musical ensemble, Medicine Baul.