Mower Power to the People at Redwood Curtain 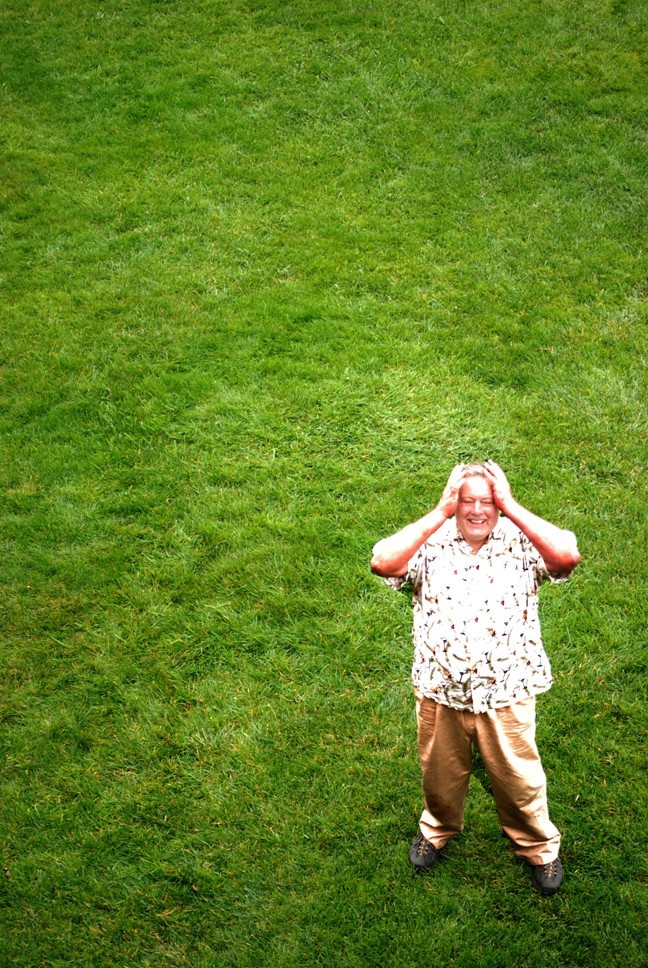 Redwood Curtain in Eureka is the first theatre anywhere to present The Lawn, a new play by Cody Henderson, a young playwright from Los Angeles. It's getting an all-star treatment, with direction by Dell'Arte's Michael Fields and a cast of RC and Dell'Arte veterans. I notice that the program doesn't bill it as a "World Premiere," as the press release did. That's wise. It seems very much a work in progress.

So theatregoers should be forewarned to approach it in a spirit of participation as it continues to change. Though it's a skilled production with good acting and splashy theatricality, at first preview this play wasn't ready for prime time, not even here in the hinterlands. It seems intent on satirizing early suburban lawn obsession and its relationship to bad attitudes about non-human life and non-white humans, which I suppose is worth doing once again. But there is also much that's at best mystifying.

The central character (almost always holding center stage) is Donald Peterson (played by Donald Forrest), the sententious and increasingly creepy über-dad, a military vet who is making his grandiloquent stand on his perfect American lawn. Clint Rebik plays his neighbor Reggie, another man of his generation who may have started at the same place, but is changing. Grace (Lynnie Horrigan) is Donald's decorous wife who longs for the Paris of yesterday. Philomena (Christina Jioras) is married to Reggie but is clearly Donald's absurd soul mate. Donald's majorette daughter Betty (Molly Armstrong) is pursued by Reggie's son Bruce (Barney Baggett), newly blooded into manhood by an elephant kill on safari. Daniel Mariscal plays George, the foreigner who lives on the other side of the Petersons.

Despite lively and fully engaged performances, there were jarring problems of coherence. While the characters of wife Grace and neighbor Reggie are written and played as real people, Donald, daughter Betty, neighbor Philomena and (to a somewhat lesser extent) teenage Bruce are caricatures. They didn't mesh. Even on their own, the caricatures were too weak and muddied for myth, and the naturalism too sketchy for drama (though Lynnie Horrigan with an especially impressive Clint Rebik had some convincing romantic comedy moments).

That's symptomatic of the whole: a mash-up of styles, a cacophony of approximated themes, incoherent even in time and place, which tries to be both historical and caricatured, with enough anachronisms to discredit the history and not enough fresh meaning to make the caricatures soar.

The parade of phallic jokes (some involving elephant tusks) led to a ribald set piece of sexual innuendo with hot dogs and cheese. Funny in itself perhaps (or in a Dell'Arte summer show) it fuels the suggestion that this is all supposed to be postmodern parody. But too much of the play gives other signals.

There are affecting glimmers and promising possibilities, and it's impossible to predict what courageous pruning, re-conceiving and rewriting may produce. But at first preview the action seemed predictable or contrived, the ideas and issues awkwardly presented. Maybe some or all of this will change during its four-week run, or has changed by the time you see it. Or maybe you'll experience it very differently.

Scenic design is by Daniel Spencer, lighting by Michael Burkhart, costumes by Amy Echeverria and sound by Tim Gray. The Lawn plays weekends at Redwood Curtain through March 5.

By the time you read this, the Kennedy Center American College Theater Festival regionals at HSU will be almost over. There are productions on Wednesday, Feb. 16 (The Time Machine or Love Among the Eloi from Ohlone College) and Thursday (Up: The Man in the Flying Chair from the University of Idaho), both at 7:30 p.m. in the Van Duzer. Dell'Arte presents excerpts from four of its past productions as the keynote event on Friday at 1:30 p.m. in the Van Duzer. Anyone can buy a day pass for $20 at the Van Duzer box office to attend a production and anything else that day -- workshops, play readings, tech expo, etc.

Among the more than a thousand students and faculty expected from the nine-state region are student critics, who will write reviews of these productions. As a VIP Guest critic at the festival (a title apparently designed to compensate for the lack of other payment), I will be talking to them about the actual practice of reviewing and writing about theatre for periodical publication. Among my topics will no doubt be the critical dance required in a small community with an even smaller theatre community, balancing integrity and support, accumulated standards and community standards, while producing columns that entertain and inform readers without needlessly hurting the feelings of people you're going to run into everywhere you go. This particular column may not be a great example.

The festival as a whole should be interesting enough for a future report. Meanwhile, Peter Shaffer's Amadeus has opened at Ferndale Rep, with just two more weekends left in the run. I hope to write about it next week, but that shouldn't discourage you from attending this weekend, Friday or Saturday at 8, or Sunday at 2. My Fair Lady continues at NCRT.