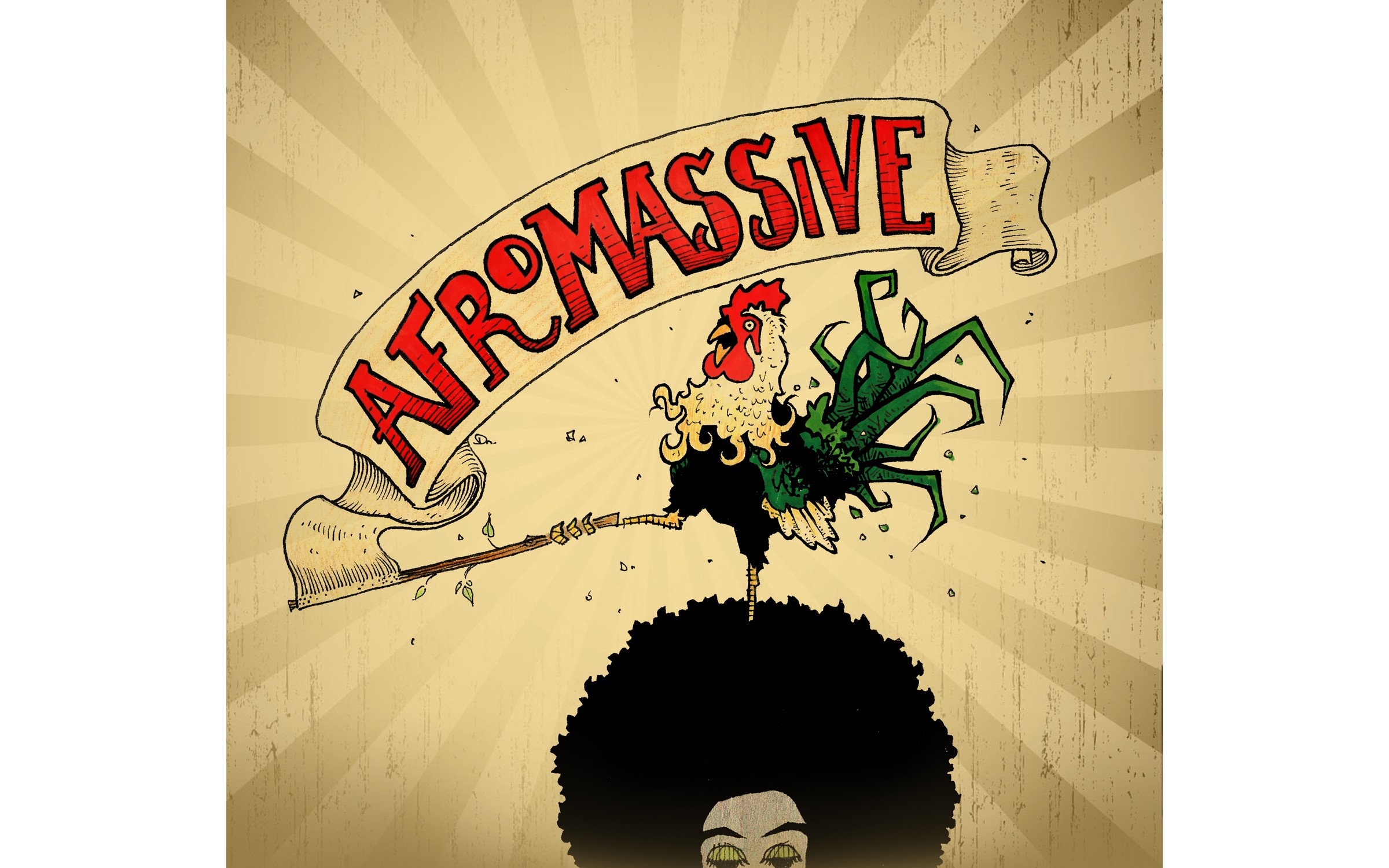 Take driving African rhythms, add in elements of American jazz and funk and bring to slow simmer. Turn the heat up to a rolling boil, add dancers and percolate until everyone sweats. That's pretty much the recipe for Afrobeat as played by the late, great master from Nigeria, Fela Kuti. His funky grooves have inspired musicians near and far in recent years.

"It's blown up in the last five years or so, with bands like Albino out of San Francisco, Chicago Afrobeat Orchestra [playing Nov. 10 at the Red Fox] and the No. 1 outfit, Antibalas, out of New York, which did the music for the Fela! Musical on Broadway," explained Greg Camphius, leader of the local Afrobeat band Afromassive.

That band got its start in 2007, when guitarist Camphius from Bump Foundation, Spank, etc. posted a bass-player-wanted note on the music department bulletin board at HSU.

"I was into the resurgence of Afrobeat," said Camphius. "It's kind of an underground movement, a musician-powered thing since it's so much fun to play. It's related to James Brown funk -- highly orchestrated, with a big band with horns and percussion." Aaron Bortz responded to his note. "We met and started jamming a bit," said Camphius. "Then I realized that he and a friend from the dorms [guitarist Armen Adamian] were way into Afrobeat. We joined forces and that's how it started. We were able to get Rob Peterson on drums and Chris Noonan on sax. Those were the key elements. Since Aaron was in the music department, he was in this clique of percussionists." (Jesse Jonathan among them.)

"There's a circular aspect to Afrobeat, layered and rhythmical. You usually have two guitars playing different lines -- high and low -- that weave together, creating this thick a wall of sound. The horn players and vocalists carry the melodies, adding layer upon layer, building energy."

All of this can be heard on the new Afromassive disc, Gridlock, a collection of eight original songs. "We don't do any covers on the album," said Camphius, "although we play Fela tunes live. I've always been a prolific writer. Aaron wrote a few. Noonan wrote one. It's not 100 percent traditional Afrobeat, but it's in that style."

Afromassive celebrates the release of Gridlock with a Friday show at Humboldt Brews. Expect special guests -- Bortz is now playing with Albino, and some of them will be playing -- and be prepared to sweat.

Be forewarned: The überhip Accident Gallery is winding down operations and before long will become a fond memory, but they're still in force this weekend. On Thursday the Accident Lab slam crew, A Reason to Listen, leads a youth poet workshop at 5, followed by an A-Lab third anniversary/open mic slam at 7. On Saturday the rockers take over, with Panache presenting The Intelligence, a trash-pop band from Portland on the way home after a long tour. They're joined by Eureka Garbage Co. playing their first full band show in a year or so, with Stevo back on bass, and the premiere of a "new" EKA band, Best Actors, which is actually Jesse Pearson and Arrogant Hare playing new and old material under a different name.

Is emo dead? Did it ever exist? Or was it just a handy journo catchphrase for indie bands singing about girlfriends and/or boyfriends? Whatevers. We'll call Friday's show at the Arcata Theatre Lounge a post-emo extravaganza, featuring the return of The Ian Fays. Twins Lizz and Sara and sister Lena are now based in S.F., where they continue to pump out albums with songs about ex-boyfriends, Dylan's Lost Days being the latest. Arcata's top post-emo band, Strix Vega, shares the headline spot, with thelittlestillnotbigenough and Sleepwalkers Baseball Club filling out the "four bands/five bucks" bill. SBC (named for a Ukrainian ball team) is songwriter Kiko Correa and drummer Dan Norman (who now lives in Portland). You can hear their Live On The Buck Calhoun Show album on Bandcamp, recorded one Wednesday or another in the KHSU studios.

Benefits abound this week. The big ones are the pair for Arcata House: Jeff DeMark doing his thing Friday at Dell'Arte (with music by Tim Randles and Matt Knight) and Joyce Hough Band and Errol Previde playing the Arcata Theatre Lounge Saturday (see Calendar for more on those).

Thursday at the Mateel, it's another tribute to the failings of our broken health care system -- a benefit to help pay medical bills incurred when Karen Ritter was struck by a vehicle. She's celebrating her survival with an eclectic night of music, including Western rock by Kent Stephenson Band, psych-blues by Radio Moscow, rock by The Malone and hip hop turntablist DJ Just-1 (plus a raffle).

Then there's Saturday's Wine for World Health, a benefit at the Robert Goodman Tasting Room with acoustic jazz by Matt and Ilan, and wine (duh). Proceeds go to New Village Hearts, a new McKinleyville nonprofit working in Dominican Republic to build a school for Haitian refugees.

World Famous keeps the electro-dance groove pumping with two shows, first at Humboldt Brews with Sub Swara, an electronic combo with live percussion that merges dubstep and hip hop -- at least that's what's going on with their latest release, Triggers, where subwoofer thumpers share space with lyricists like Dead Prez and Lyrics Born, among others. A couple more dubsteppers, Nasty Nasty and Bass Science, share the bill. Saturday at Red Fox it's two L.A. laptoppers: Nosaj Thing and Jogger on tour with Toro Y Moi from Columbia, S.C., whose dreamy music treads into indie rock territory a la Panda Bear.

New York fiddler/songwriter Sara Milonovich from Daisycutter played the Arcata Playhouse in January alongside Richard Shindell and Antje Duvekot; she returns Sunday, this time playing her Celtic/Appalachian-tinged tunes in a duo with guitarist Greg Anderson.

You want reggae? You got it. Start with Friday's show at the Red Fox marking the 21-year anniversary of Jah Warrior Shelter Hi-Fi Champion Sound System, a Bay Area-based crew that includes Rocker T, along with DJ/MCs Ivier and Irie Dole. Our own Ishi Dube joins the party.

Then on Sunday the hot young singjay from Bermuda Collie Buddz returns to Humboldt with the New Kingston Band for a show at Arcata Theatre Lounge. A dubby band from San Jose called The Hold Up opens; Selecta Prime spins before and between.

On Wednesday (Nov. 17), again at the ATL, it's reggae from yet another Caribbean island: St. Croix. Brothers Vaughn and Ron Benjamin, aka Midnite, take the music back to its roots, but with a modern sheen.

That same Wednesday one-man-jamband Keller Williams brings his guitar and his looping devices to Humboldt Brews. Yes, he's touring again. He also has a new album out, again with a one word title: Kids. Don't expect him to focus on that at this show, however, since it's a kids record with songs like "Taking a Bath," and, well, HumBrews is a pub -- no kids allowed.

If you've followed the blues scene for some time you might remember a couple from Oklahoma -- D.C. and Selby Minner, aka Blues on the Move, who came through town regularly back in the day. D.C. died a couple of years ago (RIP), but Selby's still on the move, still playing the blues. She'll be at the Mateel's Humboldt Hemp Fest Saturday (see Calendar for more on that event). On Tuesday, she returns to the Jambalaya to host the Blues Tuesday Blues Jam.