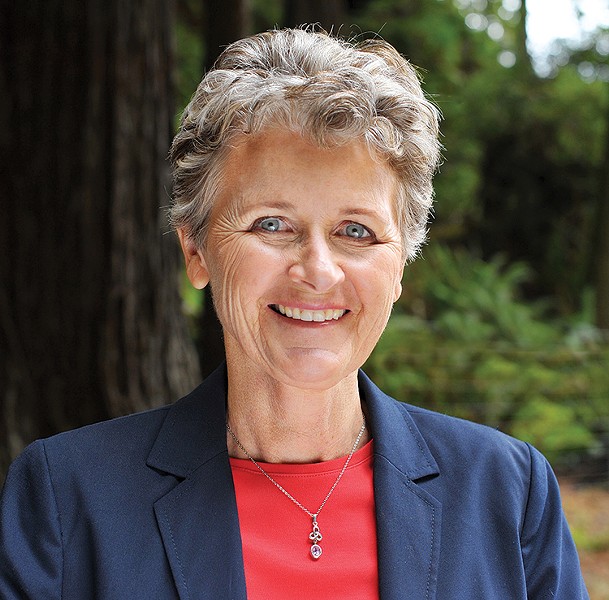 My mom used to say, "Judy Ann, if you can't say anything nice about someone ... ." You know the end of that sentence. I hope she will forgive me.

I landed my first real job when I was 15. I fried taquitos and made banana splits in El Monte, Calif. My first professional job did not come until I was in my early 30s, after three children and a degree from Humboldt State. I was a real reporter. The year was 1981; I could hardly believe someone would actually pay me to go to meetings of the Humboldt County Board of Supervisors on Tuesday and, back at the office, write about anything I thought was important enough. I loved my job. And I've always loved politics.

Within the supervisors' chambers, I've observed some of the best public servants over the years. On top of my list will always be Sara Parsons, representing the 3rd District. She was intelligent, skillful, pragmatic, witty and unfailingly gracious. I watched many times as she would gently coax her four male colleagues into doing the right thing. She could charm the cigar pipe out of the mouth of the curmudgeonly 1st District Supervisor Erv Renner, another of my all-time favorites. Then there were the feisty years (I rather enjoyed) between pro-business Danny Walsh, representing Eureka's 4th, and lefty Arcatan Wes Chesbro.

County supervisors come and go. Public policy is made and remade. The board has been unbalanced before — 4-1 with the 3rd District being the outlier. But today's board is different. Four members were put into office with a lot of money from a few individuals answerable to no one. One of those backers, Lee Ulansey, warrants constant scrutiny because he heads a shadowy, anti-government, libertarian-almost-Tea-Partyish group called the Humboldt Coalition for Property Rights. After Ulansey helped his HumCPR executive director (now former employee) Estelle Fennell win a seat on the Board of Supervisors, she turned around and joined the majority in voting him onto the Planning Commission, not bothering to recuse herself on the vote.(She also appointed Bob Morris, another HumCPR executive, to the commission.)

Going into last week, it's fair to say I was just unimpressed with this crop of supervisors. Now I'm angry. Last Monday, on a vote of 4-1, (3rd District Mark Lovelace the lone vote), they pulled off what was one of the most blatant abuses of power by a board I can recall in my 32 reporting years.

Let's start with Fennell. I have good friends who are Fennell supporters. They love her radio persona, her libertarian streak, her blue eyes and curly hair. Her spirit. Go get 'em, Estelle! I'm sure she's a wonderful, warm human being. I'd like her for a neighbor. She's just unfit for the job if she thinks what she did was OK.

So let's look at what she did:

On Wednesday, May 29, she decided all by herself — or in conjunction with her (cough!) advisers — that getting this damn General Plan Update done would sure be a lot easier if the guiding principles were a little more friendly to those of us special rural landowners. (If you think an organization's mission statement and guiding principles are not all that important, you're wrong. They are the reason any business, nonprofit organization or service club even exists.)

So, here we are 13 painful years into the General Plan Update guided since 2004 by a sound, written set of guiding principles, and one supervisor elected in a close race just last November decides to change them. How, exactly? Here are just two examples, but it doesn't take a high IQ to figure out what's going on.

Instead of "protect agriculture and timberland ... using measures such as increased restrictions on resource land subdivisions ..." (in other words, development where services already exist, not further encroaching on ag and timberland), Fennell wants to "encourage, incentivize and support agriculture, timber and compatible uses on resource lands" — or, Build, baby, build! And, all you renters out there? Second class, I'm afraid. Landowners are special. Fennell actually inserted a pledge to "honor landowners' right to live" pretty much any place they want. I guess renters have to pay homage to the moneyed land barons whose housing rights are sacrosanct.

She unveiled this radically different set of guiding principles before the weekend, followed by a hearing and vote Monday afternoon. So we all had less than 24 hours times four days to consider her personal revisions and two of those 24-hour periods were the weekend.

If you, too, are not angry, you should be — at Fennell and three of her colleagues.

Fennell got Rex Bohn, elected last June, to agree with her plan. Again, I've written before, Bohn is a great guy, a tireless do-gooder for almost any community cause. But if Bohn (1) read the original guiding principles adopted after a long public input process in 2004, (2) compared those to Fennell's changes, (3) didn't think those changes were significant and (4) couldn't see that her maneuvering was a blatant, preplanned power grab, then he is unbelievably naïve and seriously lacking critical thinking skills. He, too, is unfit to serve in the job he is paid to do.

That leaves us two supervisors elected in the previous election cycle — those up for re-election next year: Virginia Bass and Ryan Sundberg. They, too, voted yes on that infamous Monday to Fennell's power grab, making no attempt to stop her.

Last year I wrote one of my columns, an update on the Bay Trail, commending Bass' leadership as chair on a trail vote the week prior. With pro-trail Jimmy Smith absent, she was facing a 2-1 vote (Clif Clendenen and Mark Lovelace supporting vs. Ryan Sundberg, who for some bizarre, unexplainable reason was opposed). She said out loud that if she joined Sundberg, a 2-2 vote would mean failure. So she quickly started a fast tap dance, modifying language, enough to finally sway Sundberg, and we got the aye trail vote we needed. Last Monday Bass came up far short on leadership. And Sundberg? Forget it. Like Fennell and Bohn and Bass — nice people all around. Just not up for the job.

What can we do? The job of supervisor pays more than $80,000 annually. The commitment is for four years. At your next book club meeting, at the farmers markets and in grocery stores, when you go to church, when you play cards or golf or go running — start a discussion with your friends and neighbors. Do you think what Fennell and her fellow board members did was OK? At our First Friday potluck in Fieldbrook last week, I can report the answer was a resounding no. It was not right.

Who else in the 5th and 4th Districts are willing to step up and run next year, to challenge Sundberg and Bass? We need better leadership. Let's have that discussion now. And Fennell? Boy, do I miss Clif Clendenen.

Note: This article has been modified from a previous version to reflect the correct month of Bohn's election and Ulansey's position as an at-large member of the Planning Commission.